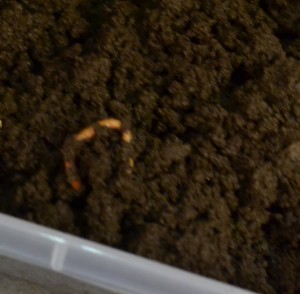 A lot of you have asked where you can get red worms for composting.

In an April article, we told you that Buffalo Reuse was planning to sell worms for composting. Unfortunately, it doesn’t look like they’ll have a stock available anytime soon, so your best bet is to go to a bait shop.

I went to Big Catch Bait and Tackle, 2287 Niagara St., Buffalo. Greg Becker, an employee there, said the red worms used for composting are easily available in the spring. They’re still available now, but they get harder to find at this time of year. If you want to do worm composting over the winter, you should probably start now. You may want to call ahead to make sure the shop has red worms in stock.

Containers of 24 worms are $2.75 plus tax at Big Catch Bait and Tackle.

I wasn’t sure how many worms I really needed, so I shrugged my shoulders and bought two containers. Afterward, I did some homework and found that there are advantages to cramming the worms in, but there are advantages to letting them grow into their habitat, too. Go here for details. In that blog post, they measure worms by the pound rather than by the number.  On another site, I found that there are about 1,000 worms in a pound, so I think 48 worms is starting out small.

I was afraid the worms still might not get enough air, so I set the lid on top loosely. Unfortunately, some worms crawled out onto my basement floor, dried up and died. I suggest snapping the lid on tightly.

I’m not sure why the worms crawled out. It was probably too wet in my bin since there was a large puddle of water pooling the bottom bin. Also, I got some mold growing, which you don’t want. (I removed the mold.) Plus, I noticed that the large chunks of watermelon rind I had set in there were all gone. While there was still plenty of paper bedding, which the worms are supposed to eat, too, perhaps some worms were looking for better food. I plan to feed the worms smaller quantities, but more often.

Worm composting, or vermicomposting, is great because it can be done over the winter. Outside, the activity in your compost pile or compost bin screeches to a standstill when it freezes. Plus, worm compost is supposed to some of the best compost you can use.

Please leave a comment if you have any tips on composting with worms.

7 Comments on “Update: Where you can get worms for composting in the Buffalo area”