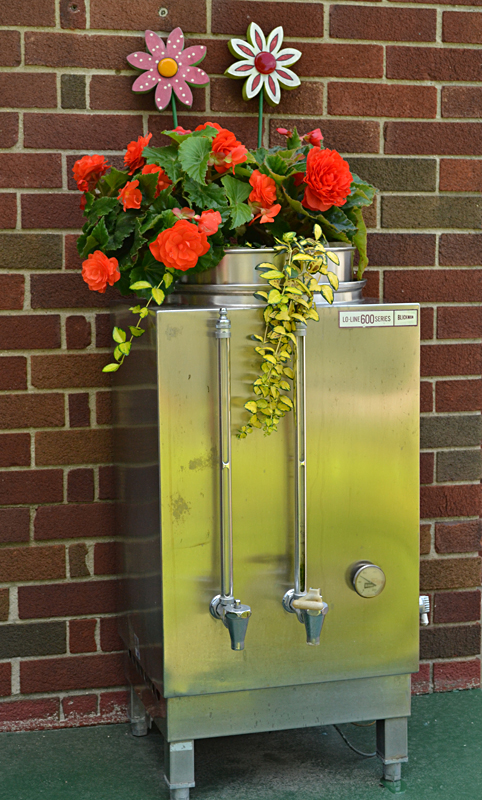 A double-tub wringer washer, a bucket for a milking machine and a pan from a salad bar are some of the items that have been found new uses in the garden of Terry and Debbie Calway on Hampton Parkway in Tonawanda.

The Calways’ garden was among the more than 50 gardens open to visitors during the Ken-Ton Garden Tour on July 21 and 22.

In the photo at left, a huge coffee machine on the Calways’ front porch becomes a pedestal for annuals.

A must-see feature is the nine-foot-tall Peruvian apple cactus plants in the multi-colored bathtub, which you can see below.The tub has a drain and other holes that keep the cactus plants from getting too much water.

The plant on the left was only about an inch tall when Terry’s mother received it as a gift in 1955– The plant is older than Terry is. The plant on the right grew from a piece that broke off the original plant decades ago. 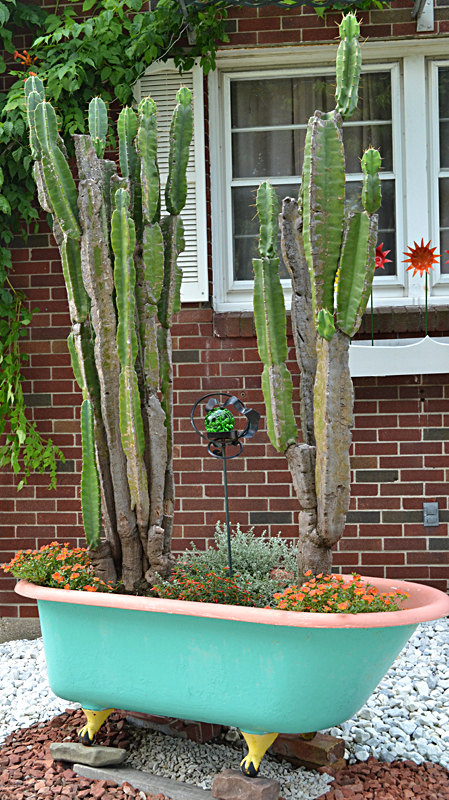 The Calways bring in the cactuses  each winter and take them outside again in mid-May.

The plants are tall and heavy– the larger one weighs about 200 pounds– so they lop as much as three feet off the tops to make the plants easier to move. Lucky friends get the pieces they cut off.

In early October 2006, the older cactus began to flower for the first time. The Calways don’t bring the cactuses in until just before Halloween, so there should have been plenty of time to see the blossom unfold. Unfortunately, on Oct. 12 the October Storm hit and killed the flower. The cactus hasn’t flowered again.

But the plants do grow well. The couple has another cactus on the side of the house that grew a foot in about two months.

Terry has a friend who was given a cactus plant by Terry’s mother when the boys were teenagers. The friend doesn’t trim his cactus plant. It grew as high as the ceiling, and when it ran out of room, it turned and began to grow horizontally. He put hooks in the ceiling to help support it as it trails across.

Many found objects are used in the front lawn, as you can see below. 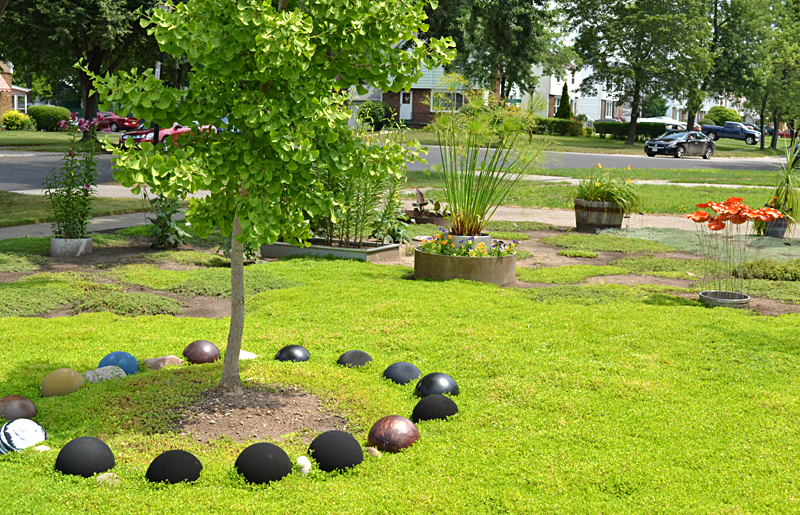 A ring of bowling balls surrounds the ginko tree. They started out with a ring of rocks and four bowling balls. When their mail carrier noticed they were using the bowling balls, if she saw a bowling ball set at the curb for the garbage, she would leave it for them under their mailbox. Even strangers have left bowling balls for them. Every time they get a new bowling ball, they take out a rock and replace it with the ball.

Tip: Place the bowling balls with the thumb-hole down. Terry thinks some of the balls might have cracked because the holes were facing up. 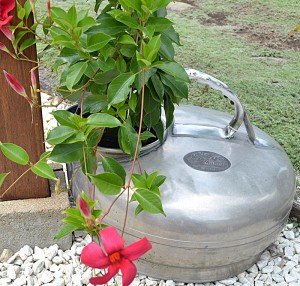 Beyond the ring of bowling balls, you can see a couple of container plantings. The round planter is made of pieces of large pipe. The square one is a pan from an old salad bar. Terry made the orange steel poppies to the right of the planters.

You might not have noticed, but that’s a grassless front lawn. It’s covered in different kinds of groundcovers.  ‘Crystal River’ Speedwell seems to hold up the best, Debbie said. They also have Veronica peduncularis (creeping speedwell), Mazus reptans ‘Purple’ and a succulent called Sedum acre ‘Aureum’.

Above, a stainless steel bucket for an old milking machine holds a clematis.

Below, a double-tub wringer washer on the porch has been converted into a container garden. 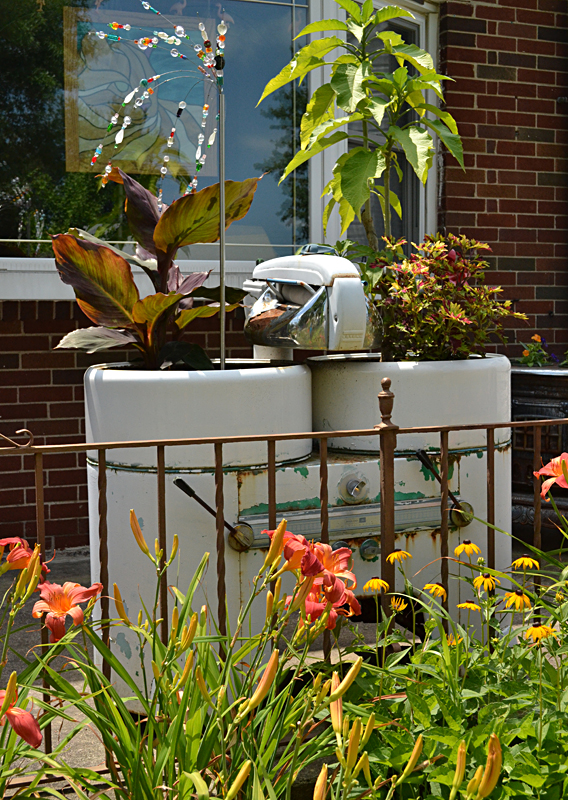 Coming up this weekend is Garden Walk Buffalo, the largest garden walk in the entire United States. It will take place from 10 a.m. to 4 p.m. Saturday and Sunday, July 27 and 28.

Five free shuttle buses will be available to take you from one section of the walk to another.

The Peace Bridge, Iskalo’s Electric Tower and the M&T Bank building downtown in Buffalo will be lit up green during Garden Walk weekend.