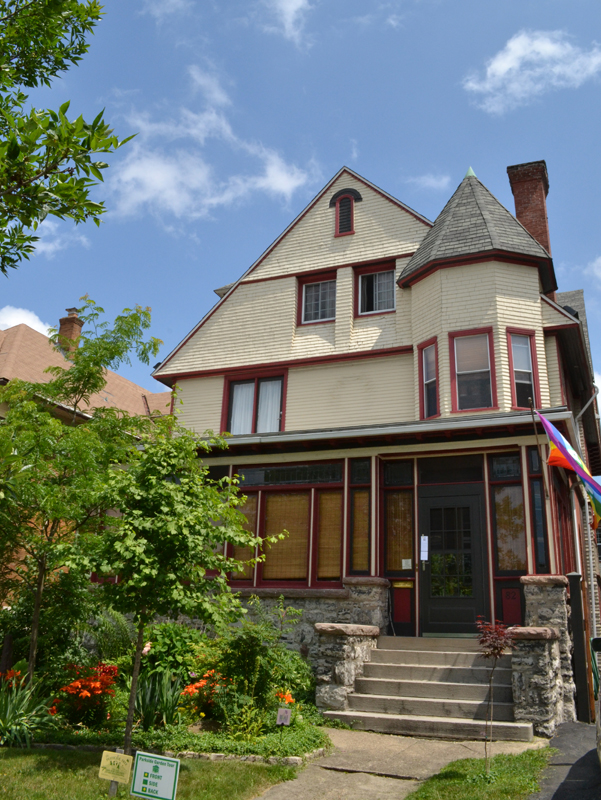 You may be used to seeing small yellow signs warning you to keep your children and pets off a neighbor’s lawn because it had recently been sprayed with a pesticide. A different kind of yellow sign is displayed in the front yard at 82 West Humboldt, Buffalo: “Pesticide Free. This area safe for children, pets and other living things.”

“To me, it’s worth avoiding pesticides,” Dan Cadzow said. “You track it inside on your shoes and the kids play on the carpets. I don’t want my kids exposed to it.”

The gardens of Dan and Renee Cadzow could be seen Sunday, June 30, on the 16th annual Parkside Garden Tour.

The Parkside Community Association, which runs the garden tour, is selling spring bulbs to be planted in fall through a Flower Power Fundraiser. You order the bulbs online and they are delivered to your house. 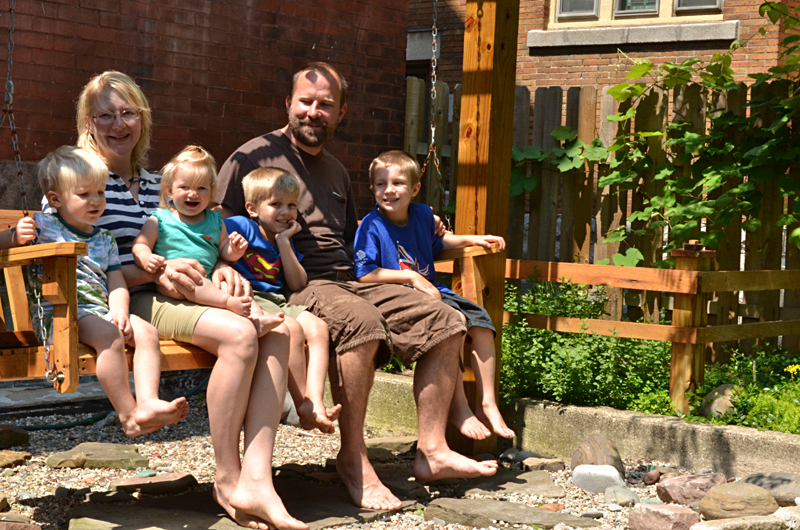 In their backyard, the Cadzow family relaxes on a swing made from a recycled cedar fence. From left are Josey, 3; Renee holding Iris, 8 months; Silas, 5; Dan, and Asa, 7. The stones under the swing include fossils the family has collected at local beaches.

When they moved in, the house, which faces the Scajacuada Expressway, was a fixer-upper. The area where the swing is now used to have a deck and a pit filled with broken glass. Tip: The Cadzows got help weatherizing their home from PUSH Green WNY. You may qualify, too. 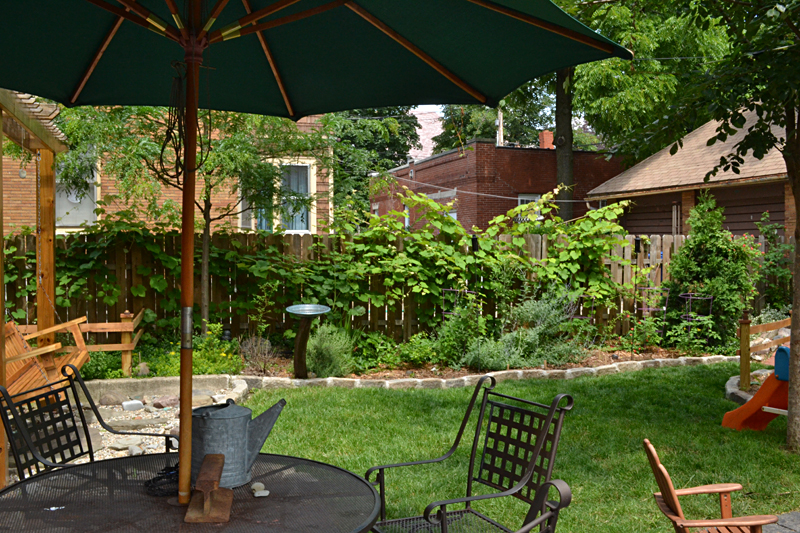 A seating area, play area and vegetables all coexist in the attractive yard.

Many of the gardens we write about have been decades in the making, but nothing in the Cadzows’ yard is more than four years old, he said.

When you move to a new place, Cadzow recommends planting as soon as possible. They were at their previous house for several years before they planted trees, and when it was time to move, the trees were just getting to be large enough to enjoy. 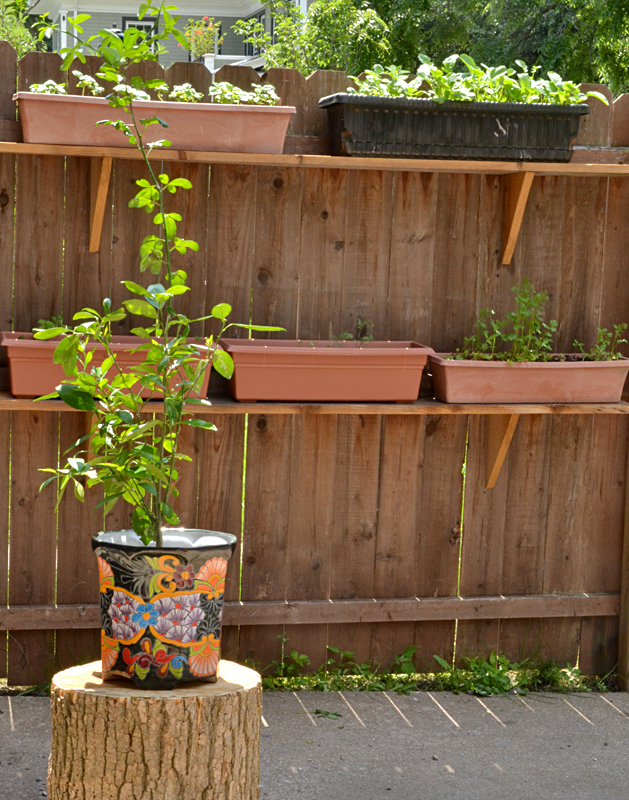 “Fix the leaky roof and get your house safe, but after that, the first thing you should do is plant things,” Cadzow said. They planted grapes three years ago and are getting their first good crop of fruit this year.

Dan said he is trying to grow as much food as he can, and though they have a typically small urban yard, his food plants include raspberries, grapes, blueberries, strawberries, corn, beans, broccoli, spinach, kale, oregano, chives, thyme, sage and rosemary. Tip: To preserve herbs, Renee suggests freezing them with water in an ice cube tray. Use the cubes of frozen herbs for soups and other dishes.

To save space, some of the herbs are grown in containers that are set on the shelves attached to the fence, which you can see above left. In the colorful pot is a lime tree that is grown inside the house. Something white was growing on it and Dan brought it outside. Before he could treat it, he noticed ants were attracted to the plant and seemed to eat the white stuff.

Another interesting backyard feature is the large wooden container garden he made to grow Chinese yams and bitter melon. It’s pictured below. When it’s time to harvest the yams, you can open the door on the front of the container to get at the yams, which are underground, without disturbing the other plants. 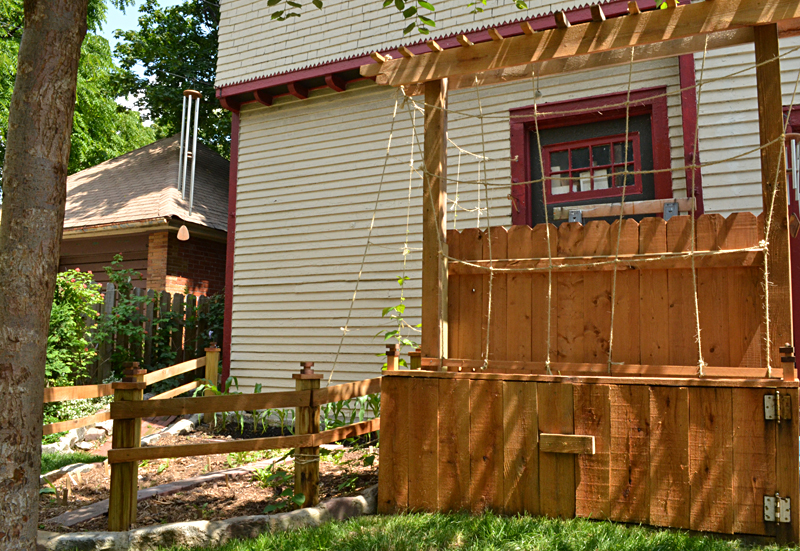 A trellis made of twine attached to wooden slats was screwed into the arbor. Cadzow discovered that when  twine gets wet it contracts, and it pulled the bottom slat away from the arbor. Next time he will make the twine trellis looser.

The planter and trellis performs another function to make the backyard pleasant: It hides the garbage and recycling cans.

Cadzow has been experimenting with biochar as a soil amendment, a technique that goes back to the terra preta or black earth created by South Americans thousands of years ago. Biochar is made by heating wood or other biomass in a no-oxygen or low-oxygen environment.

According to an article on Biochar Soil Management by J. Lehmann of Cornell University, all organic matter added to soil significantly improves various soil functions. What is special about biochar is that it is much more effective in retaining most nutrients and keeping them available to plants than other organic matter such as leaf litter, compost or manures.

Cadzow can’t discern any difference between biochar and lump charcoal–they’re both made the same way– so he is using lump charcoal in his garden. Note: Don’t use charcoal that has lighter fluid added. Look for natural hardwood charcoal. He dug a trench, threw in the lump charcoal and covered it with compost.

This is the second year he has tried biochar.

“Everything grows great here, but I don’t know if it’s because of the biochar,” Cadzow said.

Biochar may have another advantage. While decaying plant material quickly releases carbon dioxide into the atmosphere, biochar may be able sequester carbon dioxide, storing large amounts of greenhouse gases in the ground for centuries.

See other articles about the Parkside Garden Tour:

3 Comments on “Pesticide-free yard in Parkside is kid-friendly & pretty, too”