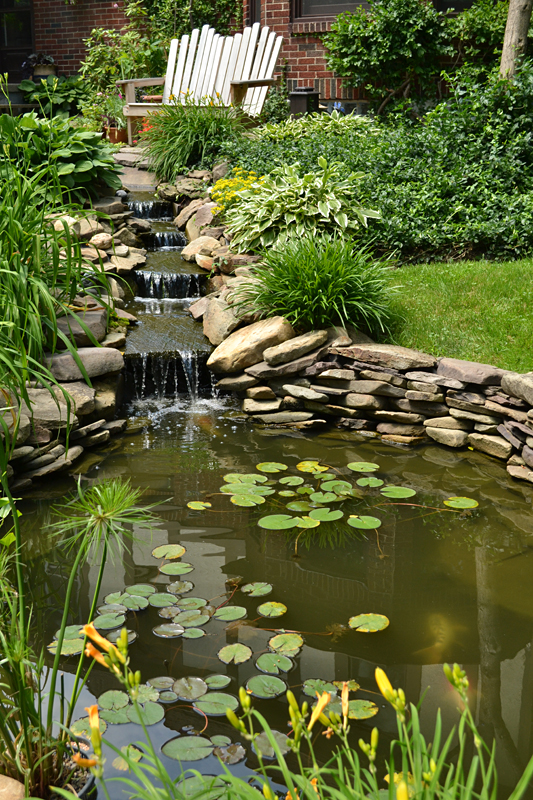 “My favorite time is the morning and night,” said Marg Rust as she surveyed the garden beds in her backyard at 71 Rosedale, Hamburg.

“That’s when you get the filtered sun reflected off the pond. It’s so peaceful. 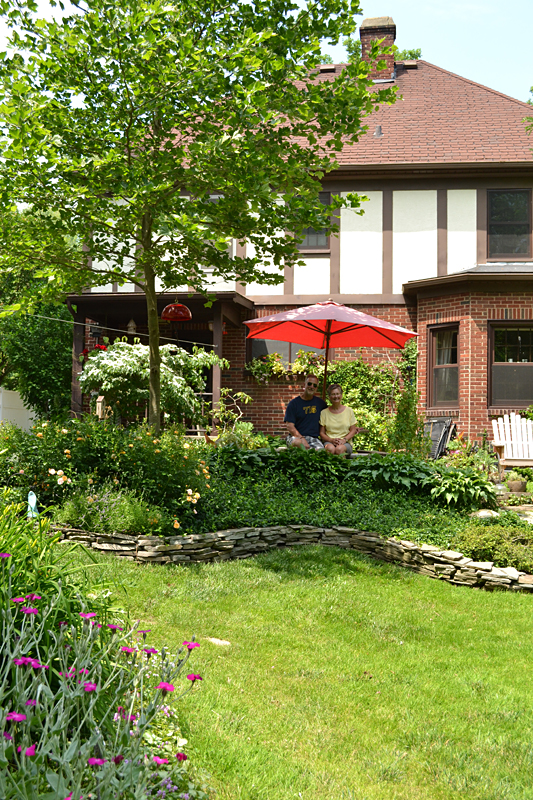 “It’s good for the psyche and the soul to surround yourself with things that are beautiful.”

She pointed out a pond plant, which you can see in the first photo. The plant at the bottom left with a spikey ball at the top of a long stalk is  a papyrus, which will get six feet tall.

I visited in the afternoon when the sun is harshest, and the yard was still a beautiful refuge. In the photo at left, Marg, right, and her husband Dave, are sheltered by a bright red umbrella.

This is just one of the more than 30 gardens you can visit during the garden walk that is part of Buzz Around Hamburg to be held from 10 a.m. to 4 p.m. Saturday and Sunday, July 13 and 14. Marg, who with a committee organizes the garden walk, suggests using a bike to get to around to all the gardens.

You can pick up maps at the Memorial Park bandstand, corner of Lake St. and Union St., Hamburg. Coupons for village restaurants and businesses will be included in the brochure.

Don’t miss the vendor fair that will be held at Memorial Park on both days.

Marg and Dave have lived in their home for more than 30 years. There wasn’t much there when they started. They are close to a creek and the soil was mostly clay. They would bring in a truckload of topsoil and mix it in, but it would just harden up again, Marg said. She solved the problem by building raised beds.

In addition to making her own compost, Marg uses worm dirt that she gets from a nearby bait shop. The shop gets deliveries of worms packed in dirt, and the dirt is full of worm castings (the end product of the breakdown of organic matter by a worm), which are good for the soil.

There are many trees in the yard. In the photo of the Rusts near the beginning of this article, you can see a sycamore which, in a few years, will get interesting greenish bark that peels. Behind the sycamore you can see a dogwood with its white blooms. She also has a purple robe locust, which just finished blooming. It gets beautiful wisteria-like flowers at that in-between time when you need some color.

With many shady spots in her yard, Marg used to be a big fan of impatiens. Did she plant them this year?

“No. Absolutely not,” said Marg, a Master Gardener who recently handled a call from a gardener who thought he could protect his impatiens from downy mildew by planting them in a pot instead of in the ground. You can’t.

She knows she has downy mildew in her yard because last year it suddenly reduced her impatiens to stalks. As an alternative to impatiens this year, she chose begonias.

“You have to kind of make do with alternates,” Marg said. “It’s not the same look as impatiens. I almost like them better.”

She also uses coleus to give her shady gardens color after the columbine and bleeding heart are done.

Another large feature in her yard is a pergola attached to garage, which is attractive from many angles. It replaced a “big, monstrous hedgerow that I didn’t like,” Marg said.

Marg said she attained most of her gardening knowledge through trial and error, but she had two tips for other gardeners: make sure you have good soil and always read plant tags.

“If the tag says the plant needs more than four hours of sun or well-drained soil, there’s a reason why,” Marg said. She had a Lenten rose that struggled until she finally placed it in the right spot.

“You can’t make a plant love it somewhere where it doesn’t want to be,” she said.

You can also visit Marg Rust’s yard on the Open Gardens of the National Garden Walk.