If you want something in your garden that your neighbors don’t have, try native plants, suggests Ken Parker, CNLP, native plant specialist and manager of trees, shrubs and perennials at Lockwood’s Greenhouses.

He will talk about native woodland plants that you can grow in your own garden at 10:30 a.m. Saturday, May 5 at Lockwood’s Greenhouses, 4484 Clark Street, Hamburg. The fee is $10. He will also be one of several speakers at a Native Plants Day at Lockwood’s on Saturday, July 7.

It’s rare to have local indigenous plants in our gardens, Parker noted. The majority of our garden plants are species that were introduced to Western New York. You don’t even see native woodland plants in our parks.

“It’s not that it’s a new product, it’s just that we lost that knowledge,” said Parker, who is part Seneca. “I look at native plants from the Native perspective.”

His knowledge of Native plants led to the development of numerous horticultural programs and lecture series within Native American communities, including the Mohawks of St. Regis, NY; the Iroqouis of Six Nations of the Grand River Reserve, Ontario; the Florida Seminoles, and Pueblos of New Mexico. In recent years he has presented for the Intertribal Native Nursery Council and U.S. Forestry Department.

Native Americans have long used native plants as food, as medicine, for fibers, for dyes and in ceremonies, he said. Other people are more interested in becoming self-sustaining nowadays, and they’re beginning to look to native plants.

There are many reasons to use native plants in your garden. Non-native plants can become invasive. Native plants support birds and insects. Our actions can have far-reaching environmental effects.  Parker noted that Native Americans look to the seventh generation, realizing that what we do now affects the next seven generations.

Lockwood’s is beginning to grow native plants for sale. This year they are offering native grasses and native perennials grown from seeds. Many of the plants that Parker will be discussing in his talk will be available for sale at Lockwood’s.

Parker’s definition of a native plant is a plant that was locally indigenous before European settlement.

There are plants, such as a Colorado spruce, that are indigenous to North America but not to New York State. For a plant to truly be a native plant, its seed source should be within 60 to 90 miles of Western New York, he said. Ideally, environmentalists would find a good wild specimen as a source of seed and document the plant’s location using GPS.

Parker knows a lot about native plants. He has been actively growing, installing and promoting indigenous plants of North America since 1992. Originally from South Buffalo, he moved to Canada and ran his own nursery that sold only native plants.

Parker also was featured for two seasons on the Canadian TV show Gardening Gamble, which was like Trading Spaces for yards.

A jazz and blues musician as well as a former U.S. Marine, Parker recently moved back to Western New York.

There are two kinds of shade. If you live in the city and have a small yard with a big tree sucking up all the water, you have dry shade. If you have an area under a tree that has had generations of leaves building up, you would have moist shade. Parker has provided lists of plants that do well in each kind of shade.

Parker offered this list of native grasses, perennials and trees. While all the plants listed here are North American, not all are indigenous to Western New York, he noted. All of these will be available at Lockwood’s. Those marked with an asterisk  are currently being propagated to be available early June.

Elymus virginicus*- Virginia wild rye : This cool-season native is widely adapted throughout Canada and the United States.  The straight, stiff and bristly seed heads are attractive in floral arrangements.  Blooms in early summer and is often found in woodland flood plains, thickets and prairie. (Average to moist soil/full sun to part shade/height: 1-3′ feet) 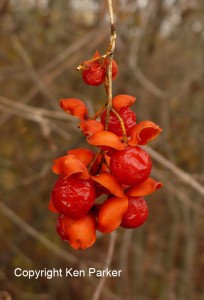