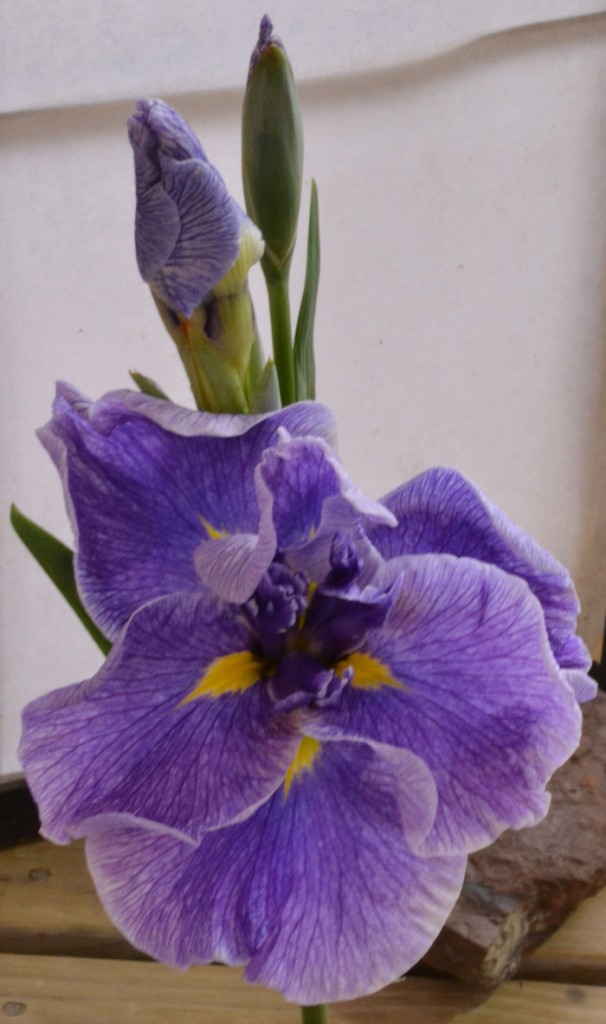 Japanese iris are easy to grow in the Buffalo area, and evidence of the beautiful blooms you can get were on display Sunday at the Western New York Iris Society’s show “Spectacular Elegance.” The show included Japanese iris and any other beardless iris; the society’s June show was for bearded iris.

At left is an example of a specimen with multiple buds on one stalk, which is a new breeding trend for Japanese iris, said Maria Gerbracht of the Western New York Iris Society. The flower was grown by Pat Kluczynski.

In Japan, the irises generally live along creeks, Gerbracht explained. The creeks flood in the spring, so the plants like wet feet in the spring. When it’s dry in May or June, you’ll have to water Japanese iris plants–though watering definitely wasn’t necessary this year! Keep plants wet in the spring, but at least damp the rest of the year.

You can place a Japanese iris in a pot and submerge the pot in a pond. However, if you keep them in pots, they must be lifted for the winter. Dig a hole in the ground and place the entire pot in the hole.

Remember that Japanese iris grow naturally along creeks, and water levels change. Water becomes shallower during summer, and remains shallow during the fall and winter.

“They don’t like wet feet in the winter,” said Judy Tucholski-Zon, a member of the society. “No, they’re not a bog plant because you can’t leave them in the water.”

When you plant Japanese iris directly into your garden, make sure the soil is acidic, ranging from 5 to 6.5. In addition to commercial additives that are available, evergreen needles can be added to the soil to make it more acidic, Tucholski-Zon said. The plants love mulching and manure.

Above right, Joanne Basset grew the ‘Classical Charm’ that received the award for best specimen of the show. It’s waist high and the bloom is as big as the palm of your hand.

At left is an example of a Louisiana iris, which is typified by its translucent foliage.

Since the Louisiana iris is used to warmer weather in its home state, when you grow it in Western New York you should lay down a thick mulch of straw or leaves before the snow falls. Remove the mulch when the frost danger is past to allow the sun to reach the plant. Late-blooming varieties will suffer less cold damage to stalks and buds, according to information supplied by the society.

Tucholski-Zon said the society will try to get some northern-hardy Louisiana iris for its iris sale, which will be held  from 9 a.m. to 2 p.m. Saturday, Aug. 6 at Rudolph Galley & Sons Greenhouses, 2722 Clinton St., West Seneca. Any specimens that you buy should be planted immediately. 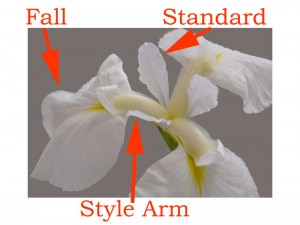 When selecting iris, you may come across descriptions of various parts of the bloom, which you can see in the photo at right. The petal that cascades down is the fall. The smaller petals that typically stand straight up (though in some blooms they may lie down) are called standards. The curved part that directs animals to the flower’s ovary is the style arm.

Because the flowers are hybridized by people, you can’t dependably grow Japanese iris from seed, Tucholski-Zon said. You must buy the plant.

Hybrids that aren’t on the open market were exhibited at the show in a category called “seedlings.” The hybrids were developed by Anna Rettig, a member of the Western New York Iris Society, whom Tucholski-Zon believes is the only person who has been hybridizing in Western New York. Unfortunately, Rettig, 92, now has poor eyesight and has discontinued her hybridizing work, said Gerbracht, who is her daughter.

Another category displayed commercial hybrids of the Japanese iris ‘Ensata’ and the iris commonly called yellow flag, also known as pseudacorus. The hybrids are called pseudata, and an example is shown above left.

4 Comments on “Japanese iris are easy to grow in Buffalo area; sale coming”