Work is underway in the second annual Front Yard Competition held as part of the National Garden Festival in Buffalo.

We’ll take a look at one of those yards, 87 Newman Place, whose makeover is being done by Murray Brothers Nurseries in Orchard Park.

The homeowners are Richard Speth and his wife Trish Rusk. He’s originally from Buffalo and returned to Western New York after retiring as an electrical engineer. Trish, a retired nurse, is originally from California.

The biggest challenge for the yard is the large maple tree that creates lots of shade, explained Tara Perrin, assistant manager for Murray Brothers. 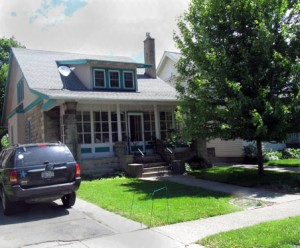 Having a shady area to work with is challenging because your choice of plants is limited. There are many plants that grow in sun, but fewer that grow in shade. And when it comes to colorful flowers, there are even fewer shade choices.

One plant that does well in shade is the hosta. There are many varieties available. They do get flowers, and some are very fragrant. Generally, though, hostas are grown for their foliage.

With her California backround, Rusk wants flowers rather than hostas.

Will Perrin sneak some hostas into the design? How will the homeowners like the finished yard?

We’ll let you know next Tuesday.

You can see the finished yards yourself starting this Sunday. You can even vote on the three you like best. Voting will take place from Sunday, July 17, through Friday, July 22.