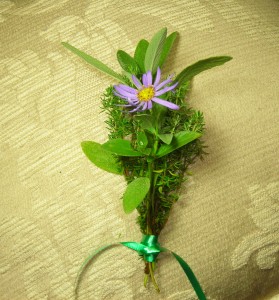 We received a question about our article last week on the Victorian Week and Ivy Show at the Buffalo and Erie County Botanical Gardens: What is a tussy mussy?

A tussy mussy is a nosegay or an herbal bouquet or a small bunch of flowers, explained Lee Schreiner, a member of the Western New York Ivy Society.

Tussy mussies date back to the 13th or 14th century. A small bunch of flowers would be attached to the wrist or shoulder.

“That was a good idea before they had deodorant,” said Sonia Falkowski, another member of the Western New York Ivy Society.

People bathed infrequently, Schreiner said. They could wash their undergarments, but in the days before dry cleaning, they couldn’t wash those fancy gowns. The tussy mussy gave off a pleasant aroma.

During the reign of Queen Elizabeth I, there was a paid position called “herb steward to the queen,” Schreiner said.

In the 1700s, people began giving symbolic meaning to flowers. For example, a red rose symbolized passionate love, while a pink rose meant friendship. An aster, like the one in our photo, symbolized contentment.

Victorian women would create special tussy mussies for their friends.

“They were very sentimental,” Schreiner said.

Men might also send a tussy mussy to a woman, and women might give them as favors at a party.

The Victorian Tea at the Botanical Gardens is sold out, but you can still attend the Ivy Show, which continues through Oct. 3.

If you would like to join the Ivy Society, or if you would like more information about ivy, you can stop by and talk with members at the Botanical Gardens from 10 a.m. to noon every Thursday.