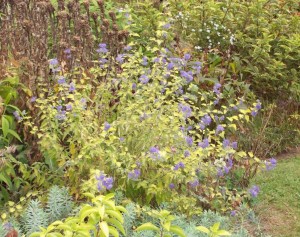 Mums are everywhere now. Heck, you can even buy them at gas stations. I’ve got fifteen dollars on pump number three, this Slim Jim, and oh, a burgundy cushion mum, please.

While I do love mums’ bushy blooms and their pungent smell, I have other plant friends that bring a different look to my garden. Rest assured they require only loving neglect, as I’ve talked about in previous columns. 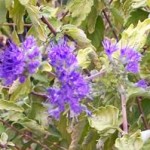 Caryopteris “Sunshine Blue,” seen above and at right,  is in its full glory right now at the end of September. Its chartreuse leaves contrast somewhat shockingly with electric lavender flowers growing along each erect branch. No drooping boughs here, it’s like a hundred highlighted exclamation points coming from a central point. Its chartreuse foliage looks great paired with sea green Artemesia “Silver Mound” or Blue Lyme grass Elymus “Blue Dune.” 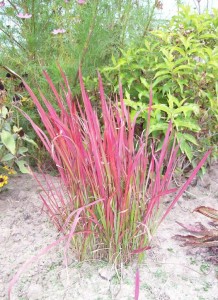 If you’ve read my other columns, you know what a fan I am of set-it-and-forget-it planting. Caryopteris will not disappoint! It dies back to the ground each year, so I leave the pruning until mid-spring and simply cut off the dead branches once I see new growth starting at the base.

Japanese bloodgrass, Imperata cylindrica, seen at left, is turning a fantastic shade of red now. I planted it this spring. It is listed as being hardy here, but I have read elsewhere that it is “not reliably perennial” even in warmer zones. I’ll have to wait and see if it does in fact return, but for now I am enjoying every moment of its fiery presence.

Anemone robustissima, below right, has delicate white to magenta flowers that start in early August and usually keep going until a heavy frost.

Its leaves, while not 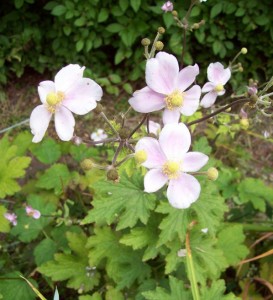 unattractive, are hardly standouts. If placed towards the back of the border, the plant eventually forms a nice groundcover with its low (9- to 12-inch) foliage and isn’t too noticeable. Then all of a sudden in late summer you notice the fluttery-petalled flowers rising on tall, 2- to 3-foot wiry stems. The stems are thin, so when the wind blows it gives the impression that the flowers are airy little dancers in frilly skirts, floating above the garden.

No one thinks of a rose as a fall flower, but my Rosa “The Fairy” is still putting on a fantastic show. The colder nights seem to make the clusters of new blooms open a deeper pink color than its summer-long pale pink. It looks a bit Pepto Bismol-ish. You can expect her to bloom through November. 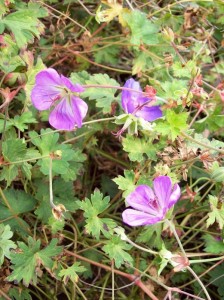 Another bloomer even through heavy frosts is Geranium “Rozanne,” seen at left. Last year mine bloomed until Dec. 12! True, there was only a lonely flower on that date, but it became a bit of a game to walk outside for work every morning and guess, “Will it really still be blooming today?”

Because she can be a rather leggy lady, to keep Rozanne looking tidy, just grab a handful of stems every now and cut them near the base.

There are many choices for autumn color in your garden– think outside the box!