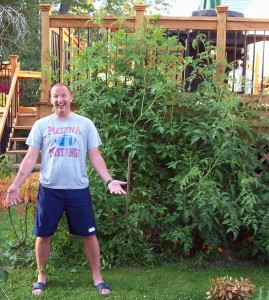 You know the “Set it and forget it” motto on the infomercial? That’s the kind of gardener I am. I set the plant in the ground and forget about it.

I describe my method as survival-of-the-fittest gardening. No special coddling, practically zero watering, and certainly no umbrellas set up to protect delicate plants from the sun. Seriously? People actually do that? If it doesn’t survive where I plonk it, it just wasn’t meant to be in my garden. No tears shed here. I do lovingly wish my little plants well though, while putting them in, followed by a stern “or else!”

With this attitude, I ventured into the vegetable growing world.  I purchased two wonderful magazines by the publishers of Fine Gardening magazine, called simply Grow. Even the title was uncomplicated! This was going to be a piece of cake!

I opened the glossy pages filled with seductive pictures of white eggplant and speckled lima beans – yes, they made lima beans sexy! – and I knew I wanted very badly to join the group of cool kids who grow their own food. The magazine offers regional suggestions for different areas of the country.

But then the magazine and I had philosophical differences. It offered plans for rotating crops in your garden with the changing weather, and detailed how to install a timer-operated drip irrigation system to ensure regular watering of your fruits and veggies. There is no way that I will suddenly become a super hands-on type gal who has four completely different growing plans to implement for the same space. Timer-controlled drip irrigation was probably the only way my produce was going to get watered because Lord knows I’m not likely to do it. I don’t have a lot of patience for wimpy plants.

So I present to you my minimalist vegetable and fruit garden trials for your own consideration and use if you, like me, want to grow your own produce organically but don’t want to expend a ton of effort. Here’s what worked and what didn’t, no constantly changing plans and no irrigation system required.

Tomatoes. Worked. Even through the dry summer we’re having, my cherry and “regular” tomatoes are doing fine with my minimal (read zero) watering. Note to the newbies: “determinate” on the label means the plant stays a manageable size; “indeterminate” means it is going to take over your deck, as seen in the photo above.

Lettuce. Not so much. Seventy-five percent of the seeds I sowed did not germinate. The four lettuces I bought as plants were incredibly bitter. I will have to try the seeds again in fall, as some crops are considered “cool season” and don’t germinate in extreme heat, or if they do, taste bitter because they bolt, that is, shoot up a flower stalk and thus the leaves taste bitter.

The lettuce at right has bolted!

Sweet Peppers. Dingdingdingdingding! We have a winner!! Bought as a plant four-pack, these survive my lack of watering and are producing nicely.

Bush beans. Success. Planted about every four inches, almost 100 percent of the seeds germinated. No thinning required. I’ve had a continuous supply of green beans for 1½ months now, and I planted new seeds where I ripped up the disappointing lettuce.

Broccoli. Poor, poor results. Almost all seeds germinated, however all but two died shortly thereafter. Of the remaining two plants, a leaf will grow large and the following day it will be eaten away to the stem with a pile of slimy droppings on what remains of the leaf rib. It’s not the bunnies that eat them, but some sort of caterpillar which I’ve never actually caught in action. This goes back to my original philosophy: If I have to construct wire domes covered in nearly impenetrable mesh for the plant to survive, I’m not meant to grow it.

If a bean or leaf or tomato gets damaged, it gets thrown into the soil to decompose on its own. No special fertilizers here. What could be healthier for a vegetable to “eat” than… a vegetable? Every morning I save my coffee grounds and when I have a small container full I sprinkle it in the food garden.

I am also growing peach trees, raspberry bushes, and blueberry bushes. Since blueberries require acid soil, they get an extra dose of coffee.

Next year I will add carrots to the mix. Next month I will try my luck at lettuce again.

2 Comments on “A minimalist approach to vegetable gardening”