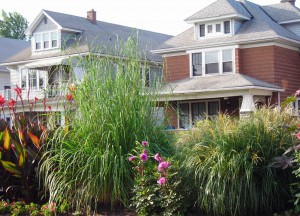 The median gardens that were started 10 years ago on Minnesota Ave. in Buffalo had begun to fade. Residents who had been active in maintaining the gardens “moved, passed away or got tied up with their busy lives,” said Yvonne Brown, a member of the Minnesota Avenue Block Club.

The median gardens got new life this year with funding from a City of Buffalo Livable Communities Block Grant, private donations and donations from the residents themselves.

“Now we’re working on longevity,” Brown said. “If somebody moves, it shouldn’t mean the gardens aren’t there.”

The gardens are planted in four medians along Minnesota Ave. from Bailey Ave. to Main St. in the University Heights area of Buffalo, an area stretching more than one-half mile. They look spectacular, and it took a great deal of work to get them in such great shape. 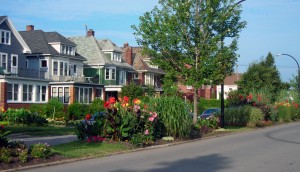 The process started in March when the Minnesota Avenue Block Club applied for the Livable Communities grant.

Residents got together April 16, the day of the Great American Clean-up, to pick up trash that had been scattered by winter winds. They got help from University at Buffalo students.

In May, the residents were notified that they received the grant. A second clean-up was held to help prepare the beds for planting.

When neighbors saw that organizers were serious about renovating the median gardens, improvements started happening up and down the street. 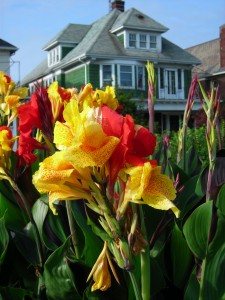 “People have taken a little more pride on the street,” said Donna Malec, treasurer of the block club. “They started maintaining their properties more, doing their roofs, and in particular, keeping up maintenance of their lawns, because that makes a difference, too.”

Malec offers this tip for anyone considering a similar endeavor: have an overall plan and use good project management.

“This is like your backyard garden magnified 100 times,” she said.

The soil had to be readied for planting. As part of the grant, the block club had to use a single nursery that offered the lowest bid. If that nursery didn’t have what they wanted in stock, the residents had to order it rather than just go to another nursery. Everything has to be done within certain time frames.

“We’re going to start at the end of this year to prepare for next year,” Malec said.

One of the things they will be working on is irrigation. They have a permit to tap into the city’s hydrant, but getting water from the hydrant to the flowers has been a challenge.

After many unsuccessful attempts, Tito Malec came up with the idea to mount a hand sprinkler on a pole, shown in the photo at left. One end of a hose is attached to the sprinkler, and the other end is attached to the hydrant through a special fitting.

However, while water gets to the plants, there’s not enough water pressure to get much water there quickly, Pernell Carson said. It can take him four hours to water the beds that he cares for.

Each block got together to design the garden in their area, and Carson did his own design.

Carson has designed his beds in an English cottage style, with a mixture of plants. He uses many tall flowers and grasses– up to six feet tall. There are breaks between the plants so people can cross the street. 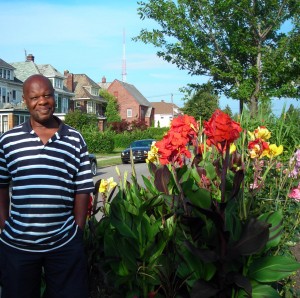 One of his favorite flowers is the Cleopatra canna lily, which can be seen next to him in the photo at right. A close-up of the flower is shown above right.

“It’s the most beautiful of all the cannas,” Carson said.

He created the “flowering boulders” you can see in the photo below. Carson planted wave petunias in burlap sacks draped over cornerstone boulders. The flowering boulders didn’t do as well as he had hoped because it was so difficult to water them enough.

Carson, using some of his own money, planted many annuals in his beds to give the beds the “wow factor” he felt was needed this year because the median gardens were unveiled as part of the  ninth annual Samuel Capen Garden Walk in July. To sustain the garden, he plans to use more perennials. 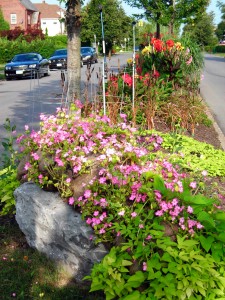 Carson is pleased with the scale of the Minnesota Ave. project. Because the median garden is more than half a mile long, it gets noticed by drivers.

“But you don’t have a chance to really see it all unless you walk it,” he added.

Visitors to the neighborhood have been enjoying the gardens. Bus tours from the National Garden Festival in Buffalo have come by, Brown said.

Neighbors of all ages have been enjoying them as well. As Tito Malec was working in the garden one day, a teenager in an SUV rolled to a stop, turned down his music and called out, “You’re doing a beautiful job!”

2 Comments on “Medians get makeover on Minnesota Ave. in Buffalo’s University Heights”