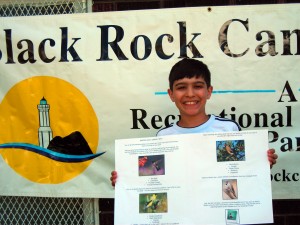 That’s why he prepared an exhibit on garden plants that attract birds, which he displayed at a booth at headquarters for the Black Rock and Riverside Tour of Gardens on Aug. 7. He also handed out tip sheets.

His tip sheet begins with hummingbirds. While there are hummingbirds in Western New York, the only kind you’re likely to find here is the ruby-throated hummingbird, Nick said.

Here are some flowers that are great for attracting and feeding hummingbirds:

“We have a trumpet honeysuckle in our front yard, but we haven’t seen any hummingbirds yet,” Nick said, “but maybe they come around when we’re not looking.”

One of Nick’s favorite backyard visitors is the American goldfinch, which likes any kind of seeds. Seeds will also attract house finches, which are native to western North American, he said, but were introduced here and are thriving.

Some plants to attract finches are:

“If a thistle pops up, just leave it for the goldfinches,” Nick recommends. He recognizes that not everyone wants the thorny plant in their garden. In that case,  you can buy thistle seed to feed to the birds, he said, adding that it may be called nyjer seed.

Cedar waxwings are striking birds that you can attract in flocks to your yard if you plant the right trees and shrubs, Nick said. He recommends:

Northern Flickers are a species of woodpeckers that love crab apple trees, he said.

If you want to attract robins, plant a raspberry bush. Nick has firsthand experience with this tip.

“I was at my grandma’s, and she has a raspberry bush in her backyard, and I saw robins fluttering around and eating the berries,” he explained.

Nick has his own blog on birding, which you can also  get to by going to the site of the Black Rock Canal Park.

What birds do you see in your yard? How do you attract them? Please share by posting a comment below!

Photo of columbine is by Laura Shreck and photo of juniper is by Kriss Szkurlatowski.