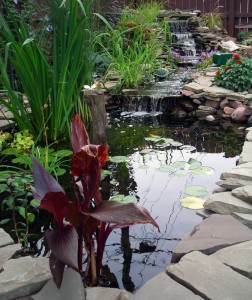 A waterfall, pond and giant water wheel beguiled visitors to the backyard of John and Joanne Perrello at 2674 Colvin Blvd., Town of Tonawanda, during the Ken-Ton Garden Tour on Saturday and Sunday, Aug. 7 and 8.

John built the giant water wheel, which is 6 1/2 feet tall, this past spring. (See photo below right.) 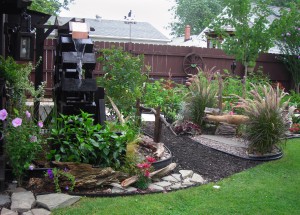 The Perrellos have many tips to share with other gardeners about adding water features to their yards.

John started by giving an overview of how he built his waterfall. (These aren’t detailed instructions, but his explanation does give you an idea of what such a project entails.)

First, while you may want to put a waterfall near a fence, you can’t build it directly against the fence, John said. 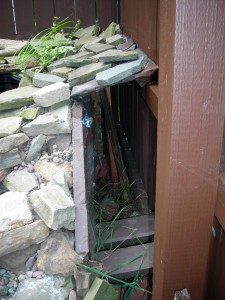 “The fence can’t take all the weight,” he explained. “You never want all that dirt against your fence. The dirt will hold in the water and rot the fence.”

Instead, you must build a retaining wall. Even the retaining wall shouldn’t be flush against the fence; you want to allow air to circulate so the fence doesn’t rot (see photo at right). John used 2×10’s to build the wall, which you can see against the stones. 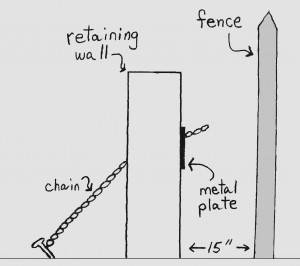 Chains are also staked into the ground behind the wall.

A shelf is added to the top of the wall to hold rocks for the top of the waterfall, which, again, you can see in the photo above right. (Don’t worry; the opening you see in this photo is masked by foliage; it took some maneuvering to get this shot.)

To keep colorful flowers in your water feature, try this tip. 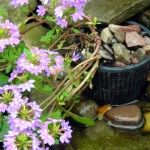 Take a pond plant basket and place stones in the bottom. Buy a Whirlwind Blue scaveola hybrid, an annual, and remove some of the dirt. Place the plant in the basket and add more stones. Set it in your water feature, making sure it’s in about a half inch of water.

“You’ll have flowers all summer,” he said. “We’ve had these for three months. You don’t have to dead head.”

Another of John’s building projects is the giant flower box that provides seating for him and Joanne in the photo below. He constructed it as a way to hide the large tree. 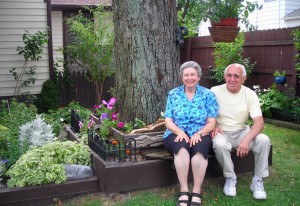 Joanne is the one who maintains the amazingly manicured gardens. She is out every day, for at least two or three hours.

“Otherwise, the weeds would take over and I don’t even want to go out there,” she said.

Joanne chooses reds, pinks and other bright colors for her flowers.

“The brighter, the better,” she said.