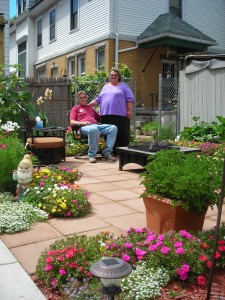 What was once an abandoned lot is now a lovely backyard patio for Susan and Carlos Gartin. They shared their creation during the Black Rock and Riverside Tour of Gardens on Saturday, Aug. 7.

The lot is on East St., just behind their home at 169 Dearborn St.  It had been a dumping ground for asphalt, concrete and bricks, and the weeds grew seven feet high, Carlos said. The Gartins bought it in August 2009.

Now flower beds are tucked in around the red pavers of the patio, and other flower and vegetable beds fill the rest of the yard. The photo at right shows you the view from the patio looking to East St.

As the Gartins worked on the huge renovation, neighbors pitched in. One gave them a bench, another sent over a peony bush and still another gave them flags. Someone else helped Carlos move a large rock. 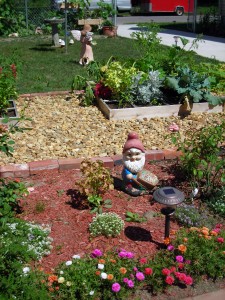 He and his wife appreciate the help, but the garden may benefit the neighborhood as much as it benefits them.  When there’s an abandoned lot on the street, it discourages people from keeping up their properties. East St. was starting to look a little ragged, he noted.  Now that the lot has been beautified, the rest of the street is starting to take off, too.

The lot underwent an amazing renovation in under a year, but there was a huge investment of hours. Carlos worked on the renovation from 6 a.m. to 10 p.m. every day since March.

Even with two lots, Carlos doesn’t have enough space to fit in everything he wants.

One way he does that is by building window boxes that he attached to the fence. These hold miniature pumpkins and Chinese long beans, which can get up to 36 inches long.

He has an idea for another project. It would be similar to a strawberry pot planter that has openings for plants along the sides of the pot. He envisions taking a hollow tree trunk five feet tall, boring holes in the side and filling the trunk with soil.

“It would be like a pot, but on a larger scale,” he said. He’s looking for some tree trunks, and would appreciate hearing from anyone who has one or two.

The Gartins already grow corn, grapes, raspberries, broccoli, miniature pumpkins, carrots, tomatoes, brussels sprouts, lettuce, cucumbers, basil, eggplant, zucchini and other vegetables. When they have extra vegetables, the Gartins leave them on the bench for any neighbors who want them.

Carlos creates his own rich soil by composting clippings from their yard. He won’t use leaves from the street in his compost because it might be contaminated with oil. In what had been the vacant lot, he made sure he used only his own soil in the areas where he planned to grow vegetables.

“I don’t use any chemicals,” he said.

When you garden organically, “expect to lose 20 percent of your crop,” he explained, showing a beautiful bunch of grapes with the occasional withered grape, “but you don’t have to worry about what you are eating.”