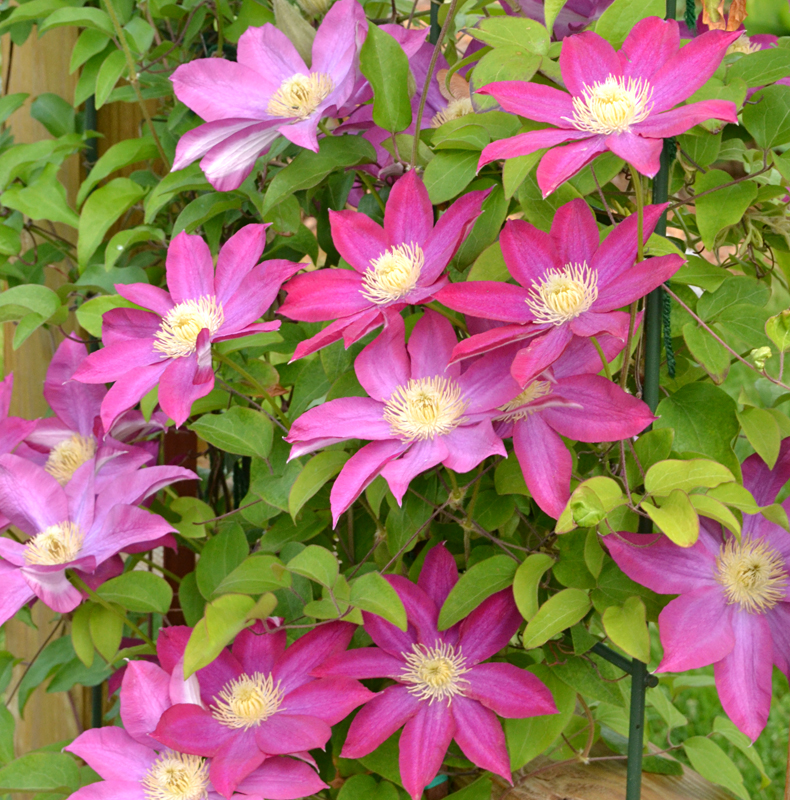 Chet Okonczak can tell you the name of every plant in his garden, and if he’s not sure of a name, he can easily look it up. 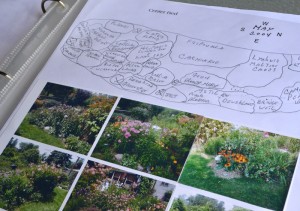 Organized in a three-ring photo album are hand-drawn maps of each plant in the six beds in his backyard at 38 Brentwood, Cheektowaga. On the same page are photos of that bed at various times of the year.

In the pocket on the back of the page he keeps the plant tags so he can double-check the name and planting information.

He also compiled a list of the common names and Latin names of all his plants.

In a separate spiral notebook, Chet keeps notes on the weather and growth of his plants. He has found that the plants bloom within about four days of the date they have bloomed in previous years.

You’ll be able to visit the gardens of Chet and his wife Pat on the National Garden Festival’s Open Gardens, which will be held from from June 27 to Aug. 2. This is the first time his garden will be featured; it is clustered with gardens in nearby Lancaster. To get details on the times and days that each garden is open, you can purchase the festival’s Directory and Open Gardens Guide for $8. 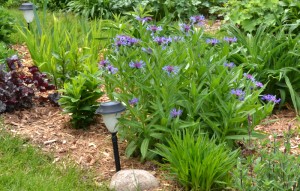 This early in the year, most gardeners wouldn’t offer to take someone on a tour of their garden because this isn’t its peak season, but there is already a lot to look at in the Okonczaks’ yard. When I visited Saturday, I saw tidy beds filled with mounding plants in shades of green and chartreuse and purple.

Flowers were already blooming, too. There was the gorgeous clematis at the beginning of this story as well as mountain bluet or Centaurea montana, which you can see at right. Tip: When the Centaurea montana starts to look ratty, cut it back. It will rebloom in August, Chet said.  Forget-me-nots and lungwort added more delicate flowers. 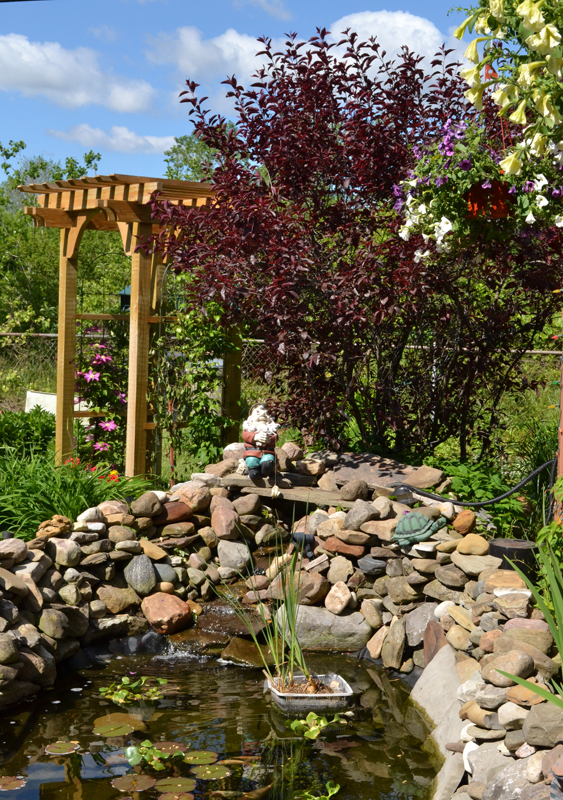 There are many rose bushes that will begin to bloom shortly, and you may catch one still blooming if you visit the yard in June at the beginning of the Open Gardens period.

Hanging pots and pots on the ground were already in place, and more pots were being readied– The couple buys 10 flats of annuals. Over the winter, Chet does custom woodworking projects, and the money he makes goes into his gardening hobbies, he explained.

Chet and his wife Pat moved into their home in 1972. The gardens were developed slowly, starting in 1997. He advises anyone starting gardens to move slowly.

“In the first place, you’re not going to be able to afford it if you try to do it all at once,” he said. “In the second place, it would drive you crazy.”

One year Chet decided that since their children were grown, they should get rid of their above-ground pool and turn that space into a pond, which you can see above left.

The couple has had problems with heron eating the fish out of their pond, so they have a statue of a heron standing guard. Tip: Herons won’t come to a pond if they see another heron already there, Chet said. 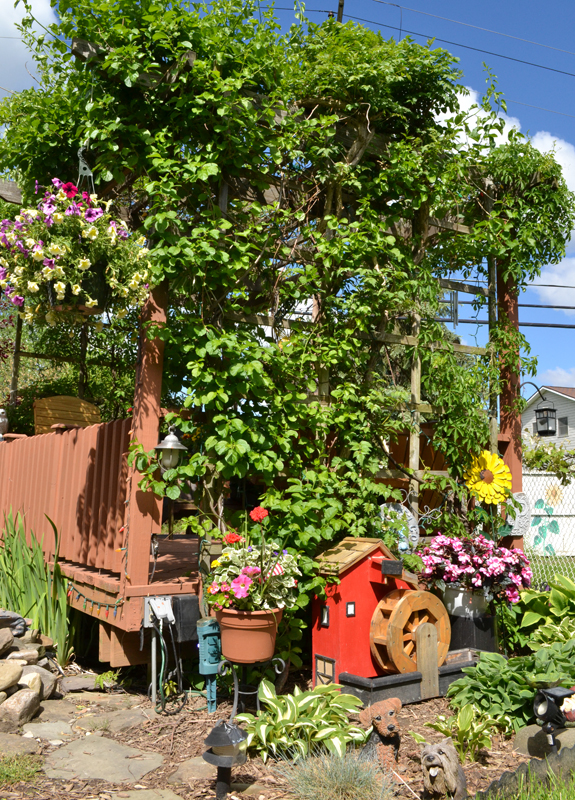 The couple has had visits from other creatures as well because of their surroundings. There is a woodsy vacant lot behind the yard, a creek runs nearby and Stiglmeier Park is just down the street.

While we were outside talking, a deer walked into the next door neighbor’s yard. The Okonczaks’ chain link fence generally keeps the deer out of their yard. However one time a young deer made its way in and Pat led it out, Chet said.

Another time the couple noticed that something was eating the fish out of the pond. When their Yorkie, Sam, caught something, they discovered what the culprit had been–a mink!

“You should have seen the claws and teeth on it,” Chet said. “Sam is fearless.” Sam also caught a bat and chases raccoons.

In addition to the pond and early blooming plants, the hardscapes in the yard add interest at this time of year. To the right of the pond is a lovely deck, which you can see above right. Chet built it with the help of Pat.

“Pat helps me with everything,” he said admiringly. When they wanted to put a roof over their uncovered patio, “I was throwing sheets of plywood up to her and she was nailing them on.”

Chet wanted vines to grow up the side of the deck and across the roof. He tried wisteria, but he could never get it to bloom. Then he tried bittersweet, but it was too invasive and he spent two years trying to eradicate it. Now he has Virginia creeper, which he likes for its leaves, and trumpet vine, which gets beautiful flowers in summer. The vines form a lacy canopy over the deck, which you can see in the photo below. 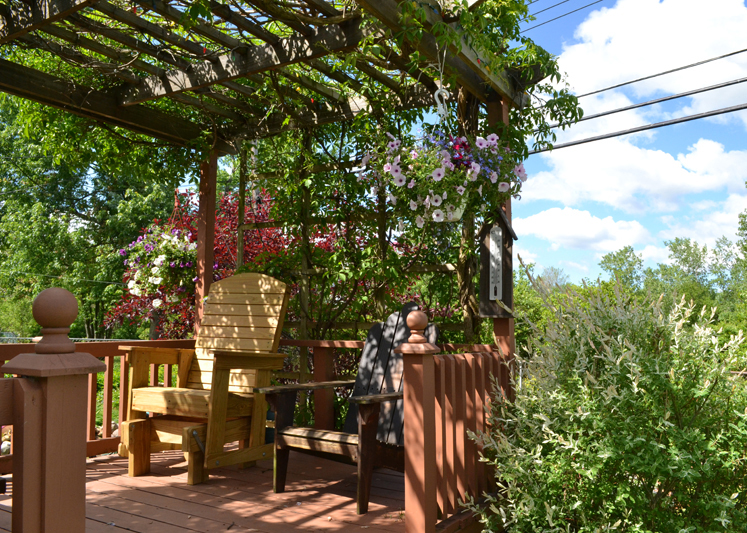 “I hack the trumpet vine (on the roof) back to almost nothing in the spring or it would take over,” he said.

The shrub by the steps is a dappled willow. It thrives in that wet spot where a spirea didn’t do well.

Chet also has a large area set aside for a vegetable garden.

Chet says he learns a lot from the other members of the two garden clubs he belongs to: the South Town Gardeners and the Cheektowaga Garden Club.

He also gets advice on plants from the many different garden centers in the area that he visits.

“People know me by sight now in these different nurseries,” he said.

He gets a wider variety of plants by visiting different garden centers because they all carry different plants. Chet noted that what they carry can change from year to year, too, so if you see something new that you think you will like, you might want to buy more than one plant in case they decide not to carry it the next year.