Alstromeria ‘Inca Ice’, seen above, is one of the “hot picks” offered this year as part of the Great Plant Sale of the Buffalo and Erie County Botanical Gardens.

Only a limited number of specimens of each hot pick will be available.

The hot picks must be ordered online. The deadline to order is April 5.

Alstromeria ‘Inca Ice’ is a perennial that is hardy in our zone and blooms non-stop. This very dense, bushy plant covers itself with blooms in muted shades of apricot, pink, cream and yellow, all spotted in russet brown. From a distance, the blooms appear to be peach colored; upon closer inspection, a full palette of pastel hues are on display.

It attracts hummingbirds and has great cut flowers. It needs part shade to sun.

Go to the Botanical Gardens website to see all the plants that are available.

Native bees may be important in crop pollination 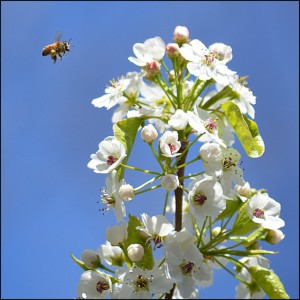 If you have a crop, such as apple trees, that needs to be pollinated, you can bring in hives of honey bees (Apis mellifera). Farmers have relied on these European imports because, unlike native bees, honey bees can be managed: herded and transported and farmed the way sheep and other animals are farmed.

But there are concerns about honey bees for many reasons, including Colony Collapse Disorder, where many worker bees from a hive suddenly disappear. According to an October 2012 post by the United Stated Department of Agriculture, researchers still don’t know what causes this problem, though research is continuing in a number of directions.

While honey bees are widely viewed as the most important pollinators of crops, native bees may be playing a larger role than we suspected.

According to Professor Bryan N. Danforth and his team at Cornell University, more and more evidence suggests that native bee species contribute significantly to crop pollination. This is especially true in apple orchards where there may be as many as 60 to 80 species of native bees visiting apple blossoms during the bloom period. Many of these native bee species appear to be important pollinators and many apple growers are relying increasingly on native bees for apple pollination.

Surveys by Danforth’s team in the Finger Lakes region indicate that native bees may outnumber honey bees in many orchards. The team is trying to determine what orchard management practices promote native bee abundance and diversity. Many apple growers no longer bring honey bees into their orchards; they are relying increasingly on the naturally occurring native bees for apple pollination.

“We believe that native bees may provide a viable, economically feasible alternative to honey bees for apple pollination,” Danforth said. “This is especially important now that honey bees are in decline in North America.”

The photo shows a bee (we’re not sure if it’s a native bee or a honey bee) flying toward a pear blossom. The photo is from Donna Brok’s post at Garden Walk, Garden Talk called “Native Bees Reign Supreme” and used with her permission. See that post for more spectacular images and interesting information.

And the answer is: Yes, it seems to be a voodoo lily 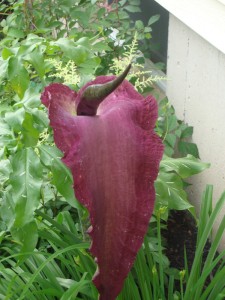 You may have missed the discussion that ensued from last week’s article on the voodoo lilies grown by Fran Evans in Hamburg.

After seeing those pictures, Barb Krajewski sent me photos, one of which you can see here, of a plant that looked similar to the plant in the article.

“Oh my gosh!” she wrote. “I’m pretty sure I had one of these growing in my flower bed and had no idea what it was or where it came from!”

Her plant didn’t look exactly like Evans’ plant. She said her plant smelled a little. Was it a voodoo lily?

I posted the photos at the end of the original story and on the Facebook page for Buffalo-NiagaraGardening.com. On Facebook, Ricky Rico of Buffalo pointed me to an article on Rural Ramblings about a voodoo lily. That article contained a photo of a plant that looks just like Krajewski’s! Thanks so much, Ricky!

Barb Krajewski doesn’t know where the plant came from. She doesn’t know if it will come back this year– she may have ripped it out last year. Keep us posted, Barb!