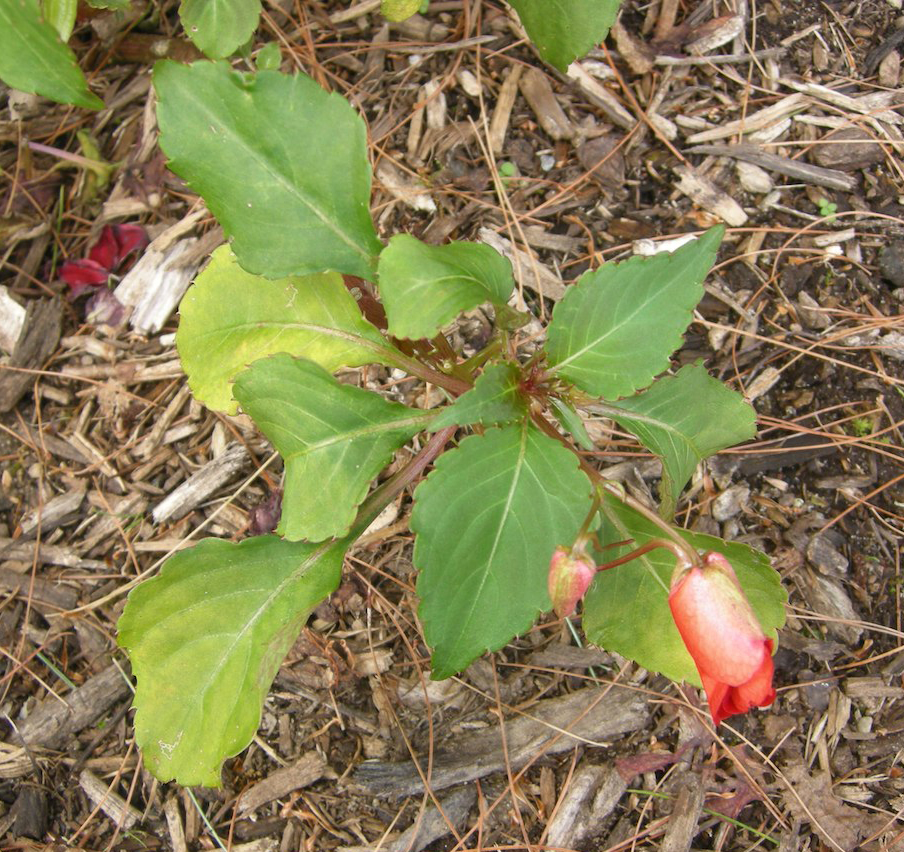 If you had problems with your impatiens this year, the good news is that you probably didn’t do anything wrong.

The bad news is that your impatiens were probably killed by a fungus-like disease called downy mildew.

The disease remains in the soil, so you should plan on planting something different in that spot next year.

There is no treatment.

“That’s the most challenging thing about it,” said Margery Daughtrey, senior extension associate with Cornell University who co-wrote a fact sheet on the problem. “There’s really nothing a home gardener can do about it. There is nothing to spray, nothing to buy to counteract it.” 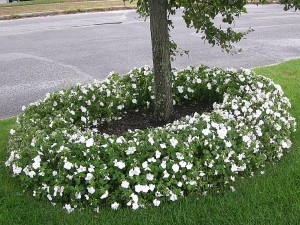 The plants will seem fine, then they turn yellow, drop their leaves, drop their flowers and even drop their stems, Daughtrey explained. The photo at the beginning of this story shows the early stages of the disease.

The effects are most dramatic after rainfall because the disease flourishes in moist conditions. Daughtrey’s before photo, above right, was taken last summer in Riverhead, which is on Long Island, then the area was drenched in a hurricane and a tropical storm. The after photo, below right, was taken five weeks later in mid-September when the impatiens should have been happily blooming. Many gardeners incorrectly assumed their plants were damaged by the severe weather.

Our dry summer here may have spared us to some degree from this problem, she said, and the problem may get worse as we experience wetter weather. The disease has already been reported in the Snyder and Williamsville areas of Amherst, said Mark Yadon, vice president at Mischler’s Florist and Greenhouses.

There are many things that can make an impatiens plant turn yellow and have stunted growth, such as lack of water or fertilizer. However, those problems don’t usually cause it to drop its leaves, Daughtrey said.

If your plant lost its leaves, you probably have the downy mildew problem. Check the undersides of the leaves. Affected plants will have a white coating that looks sugary, as in the photo below left. 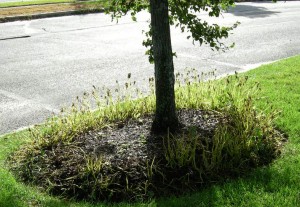 Daughtrey noted that it’s not always easy to see the coating. You may not spot it on every leaf of an affected plant; you may have to check many leaves before you detect it. Also, note that the undersides of many impatiens leaves are normally a mottled purple. If you see mottled purple, don’t worry.

If your plants are affected, pull them up, bag them and throw them out. Don’t put them in your compost!

The disease is expected to come back next year.

Because this is a new disease, it’s hard to know how it will play out in coming years, Daughtrey said. It may be worse in rainy years and better in dry years. It could rage through an area for a few years, then calm down for reasons we don’t understand.

The disease affects Impatiens walleriana,  which are  standard garden impatiens including double impatiens and mini‐impatiens.

However, the disease doesn’t affect New Guinea impatiens, which may do well in the spot where you would ordinarily have impatiens. 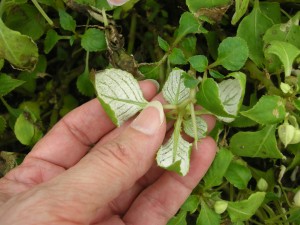 Yadon from Mischler’s noted that New Guinea impatiens are more expensive to produce than standard impatiens, so gardeners who want to fill in a large area may be looking for less expensive plants.

Coleus can add color to a shady area, though it’s not a flower. Other options are flowering vinca, ornamental grasses and tropical foliage plants.

No one knows why this disease, which has existed in the wild since the 1800s, is now bothering impatiens, Daughtrey said. Impatiens have been around since the 1960s and are a favorite of gardeners because they offer bright colored flowers for shady areas.

Now that impatiens is a less reliable plant, they will become less popular, Daughtrey predicted, which means a big change in direction for growers. She estimates that impatiens constitute 20 to 70 percent of what businesses in the bedding plant industry produce.

“It’s going to be devastating– impatiens is a huge crop,” Yadon agreed.

Yadon said he probably will still grow impatiens next year, but will create good signage explaining the disease problem. A plant can leave the garden center perfectly healthy, then fail when it is in the garden because the disease organism is in the soil and can be spread by the wind.

“We’ll be looking at other things to produce,” Yadon said. “We have to figure out something else to do and make it affordable to homeowners.”

For suggestions on what to plant instead, read this 2013 update: Impatiens are dying; choose alternative shade plants instead

Have you experienced downy mildew on impatiens where you are?

Do you have more suggestions on what to plant instead of impatiens?

UPDATE: See predictions for how well impatiens might fare during the summer of 2014 in Western New York.

86 Comments on “Disease that’s killing impatiens may return for years; no treatment exists”