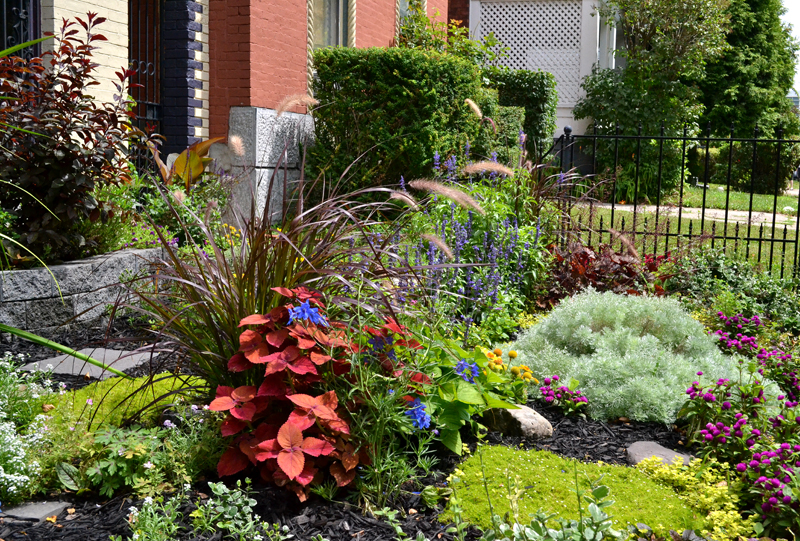 “I took a plot where even grass wasn’t growing because there was too much clay and turned it into this,” said Marilyn Rodgers of 81 Johnson Park, Buffalo.

She shared her colorful garden during Garden Walk Buffalo last year. This year the event will be held July 28 and 29.

Rodgers’ garden is another example of grassless front yards that are so charming. They seem to be turning into a symbol of Buffalo-style gardening. 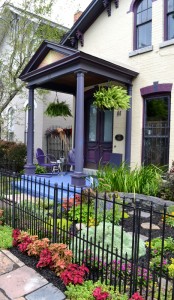 Her front yard was mostly clay, so she got peat moss and humus (decomposed leaves and such) and rototilled  those materials through the clay. The first year she just planted annuals because she wasn’t sure what she wanted to do. The next season she added more peat moss and humus, and it’s now flourishing.

“I love Charleston, S.C., so that’s the look I’m going for,” Rodgers said, adding that she wants to install a fan on the front porch of her 1830 Italianate house.

Color is important to Rodgers, and she has plenty of it in her garden. What’s surprising is how little of the color is supplied by flowers. Yes, she has many flowering plants, but they’re not all in bloom at the same time.

The large areas of color are supplied mainly by coleus, sedum, mosses and grasses in strong yellows and green.  Notice the dramatic contrast between the red coleus and yellow creeping jenny in the photo below. There’s so much color without any blooms. The dark mulch also adds to the look of the garden.

Rodgers aims for a symmetrical design. 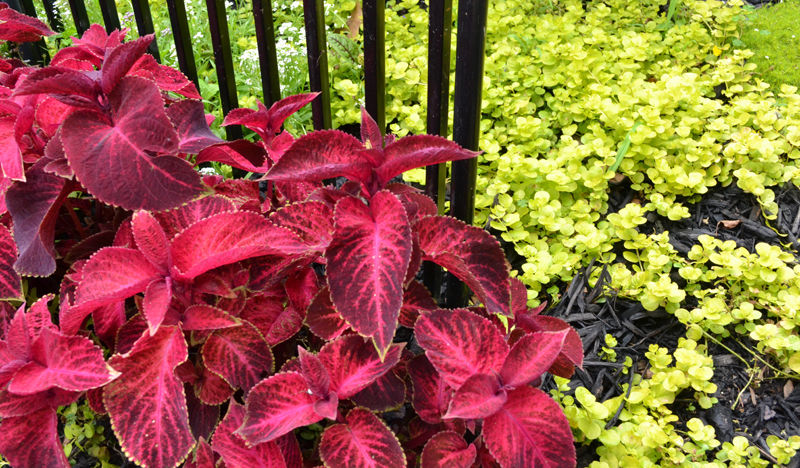 One of the interesting flowers in her garden is the pretty ice plant, which you can see below right. In California, where wildfires are a problem, the ice plant was touted as a fire safe plant, according to the San Diego Horticultural Society.  They were planted along roadsides and on hillsides of thousands of homes in San Diego. Unfortunately, the ice plants crept out of gardens and began competing with native plants. Ice plants are no longer  recommended in that area.

The ice plant doesn’t grow that aggressively here. In the spring, the plant looks like dead wood, so Rodgers cautions you to take care not to weed it out. 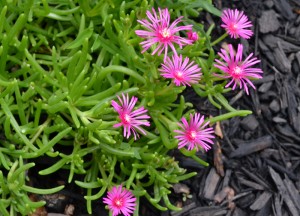 Another interesting plant in her garden is a fragrant grass called threshing grass. During Victorian times, people didn’t bathe often, so they would toss the grass on their floors, she said. When you walk on the grass, it gives off a sweet scent.