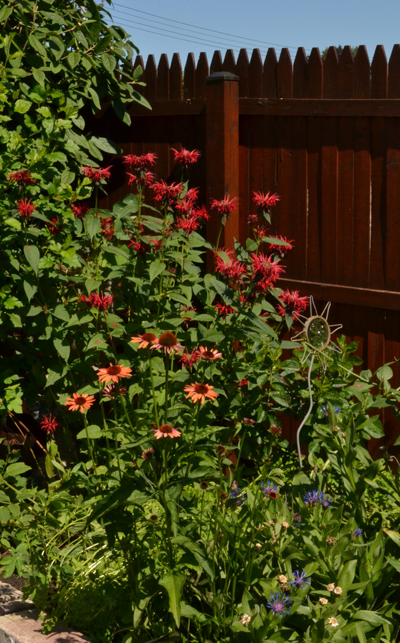 Climate change is here. What does that mean for gardeners and farmers in Western New York?

Should we alter our growing plans? If so, how?

Evidence that the climate is changing in Western New York

You may have noticed migratory birds arriving earlier than they used to or see some bushes budding in January. Those are clues that the Western New York climate is slowly changing.

However, we have more than anecdotal evidence that climate change is occurring in our area. Long-term data, such as the frequency of record high temperatures, helps us understand how our climate is changing. 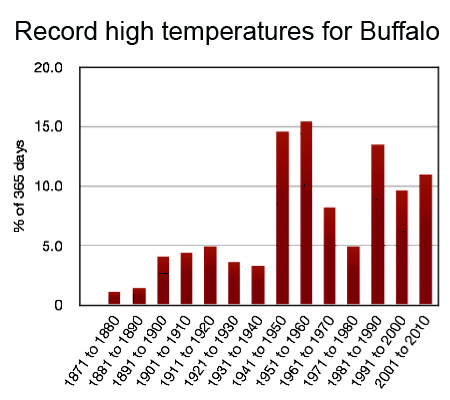 Average temperatures seem to be increasing as well, which affects “growing degree days.”

The instructions on a seed packet may tell you to plant seeds May 15 and that it will take 70 days for them to grow to maturity. However, if you planted another seed packet 10 days later, the second crop will be not be ready 10 days after your first crop; it will be ready sooner than that. That’s because the average temperatures in June and July are higher than in May, so the number of growing degree days accelerates in this time period.

For example, in Buffalo, an average May temperature might be 56˚ Fahrenheit and an average July temperature might be 70˚ Fahrenheit. Each day in May might be equivalent to 6 growing degree days, while in July each day might be equivalent to 20 growing degree days. The 10-day advantage of the earlier planting is made up in only 3 days in July. A 10-day early start in May results in only a 3-day earlier harvest date. 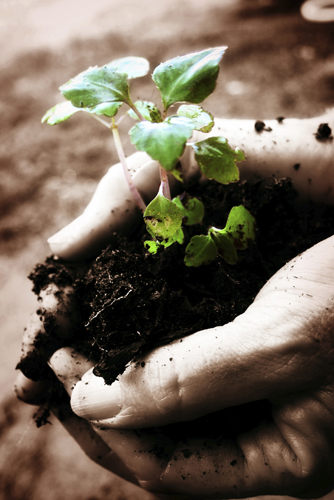 The number of growing days needed is different for each kind of plant.

Our hardiness zones have changed to reflect changes in climate

In 2006 the Arbor Day Foundation changed its U.S. hardiness zone map to reflect changes in climate. A large portion of New York was changed from Zone 5 to the warmer Zone 6. This includes much of Western New York, although pockets of Zone 5 are still present.

The U.S. Department of Agriculture issued a new map this year. It has a slightly different convention and maps the zones a little differently. In addition, it lists typical last frost dates.

What’s especially nice about the U.S. Department of Agriculture website is that it allows you to search your Zip Code for your hardiness zone. Buffalo and its suburbs are in Zone 6a (annual extreme minimum temperature of -10 to -5˚F), but Ransomville in Niagara County is in the warmer Zone 6b (-5 to 0˚F). To the south of Buffalo, Eden is in the cooler Zone 5b (-15 to -10˚F), while Springville is in the even cooler Zone 5a (-20 to -15˚F). 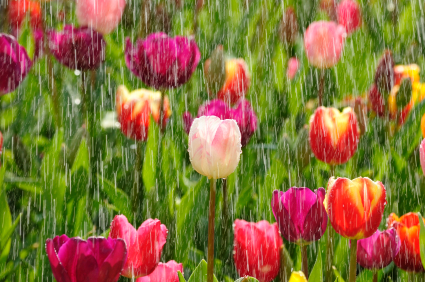 Climate change projections for Western New York by 2030 include a wetter spring and a warmer summer (3-4 ˚F on average), trending toward the current climate of Ohio.

Relatively little change in the overall amount of rainfall is forecast, but it may come at inconvenient times—heavier rains in the spring with longer dry periods in the summer between rain days.

The predicted increase by climatologists of 3-4 degrees in warming by 2030 for Western New York may not seem like much, but it can add many growing degree days to our season.

For example, if you were growing peas, between April 1 and May 31 there are a total of 704 growing degree days based on 30-year temperature averages. However, if we instead use the monthly average temperatures in the more recent years 2003 to 2011, we get 775 growing degree days. That’s a level the attentive gardener is likely to notice.

For the main growing season of May 15 to Sept. 1, just a 2-degree increase in average temperature would add 216 growing degree days. This means an acceleration of the “thermal calendar.” Vegetables and flowers will mature sooner. 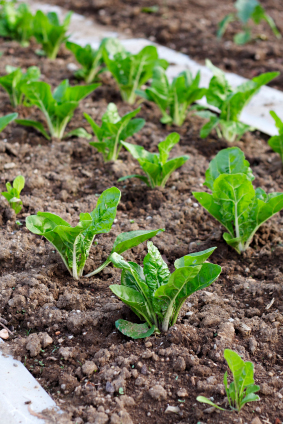 The data suggest possibilities for multiple cropping as well.

For example, we could add either an early or late planting of a fast-growing vegetable that does not require flowering or ripening, such as spinach. This may be a strain on some soils and its success is not at all certain, but the risk for the home gardener or urban farmer may be acceptable.

A little warmer growing season would also make it less risky to grow those plants, such as watermelon, that require more growing degree days than most to reach maturity.

What else this means for your garden

If the pattern of wetter springs and warmer summers holds in the future, some changes in flower and vegetable gardening may be appropriate.

Experts from the 2007 symposium “Gardening in a Changing Climate” offer some advice for dealing with climate change.

First, this is no time to ease up on maintaining good soil conditions. A good soil will serve as a buffer against extreme weather events.

Second, good horticultural practices (proper site selection, pruning, etc.) are always in style. Since horticultural pests, both weeds and insects, will also respond to climate change, we will have to be both alert and flexible regarding pest management.

Third, expect and embrace change. Some of our favorites may no longer thrive, but we also have an opportunity to try something new.

Perhaps you were reluctant to try some of those catalog offers because they were labeled for Zone 6 and above. For home gardeners especially, with relatively little to risk, it is time to experiment. Perhaps it is time to give that huckleberry or Goji berry a place on your landscape.

Why not commit to trying something new this coming growing season, whether it is trying a new vegetable at the farmers market or starting your own vegetable garden? The key to gardening success in the next decade or so, in light of climate change, may be flexibility on our part using the existing wealth of biological diversity we still enjoy.

5 Comments on “What does climate change mean for Buffalo-area gardeners?”