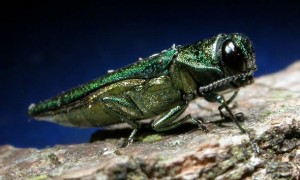 By the time the beetle has been detected, it has probably been living in the area for three to five years, said Jeremy P. Sayers, board-certified arborist and president of The Tree Doctor. During that time, it has been spreading exponentially and infesting ash trees.

This is a problem you have to worry about only if you have ash trees.

But if you do have ash trees, you should act now. The best way to deal with the emerald ash borer is to treat your healthy ash trees to prevent an infestation, Sayers said. There are a couple reasons for that.

The emerald ash borer feeds on the xylum of the tree, which is like our system of arteries and veins. The medicine is injected and moves through the xylum. If you wait until you have an infestation, the xylum will be damaged, making it more difficult for the tree to move the medicine around to affected areas.

Compared to prevention, treatment takes longer, requires a higher dose of medicine, is more expensive and may be less successful, he said.

You probably won’t see the emerald ash borer, Sayers said, because it is very small. It feeds toward the top of the tree, then it burrows inside the tree. You won’t notice the infestation until you see that the tree is dying.

Sayers recommends that anyone in Western New York should treat their ash trees. That includes the eastern suburbs of Rochester going west to Erie, PA. From south to north, the area extends from Cattaraugus County, where the insect has previously been detected, to Niagara County. He notes that in addition to the threat of the insect moving north into Niagara County from Erie County, the emerald ash borer is all over the Niagara Peninsula in Ontario, and the insect can easily fly across the river.

There are a number of injection systems that have been studied by universities, and only one, called Arborjet,  is almost guarnteed to work, Sayers said.

Using Arborjet, it costs about $9 or $10 per diameter inch to provide a preventive injection to a tree, he said. For a tree with a trunk that is 10 inches in diameter, it would cost about $100.

One injection will protect the tree for about three years.

To prevent infestation, a tree would need a course of three or four injections. That’s because the emerald ash borer is forecast to remain in the area for 10 to 12 years, Sayers explained. After that time, the emerald ash borer will have killed every ash tree that’s not treated. With nothing to feed on, the insect will disappear.

As my sister pointed out, it may seem expensive to prevent an infestation, but if you don’t take preventive measures, your tree will die and you face the cost of cutting it down.

The treatments can be done during any time the tree has leaves. The process includes drilling holes into the tree, which doesn’t cause any long-lasting harm to the tree.

If you’re not sure whether you have ash trees, or if you want an estimate on how much it would cost to tree your ash trees, you can contact Sayers for a free consultation.

2 Comments on “Emerald ash borer detected here: what you should do”