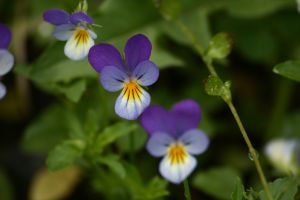 February folks actually have a choice of two flowers for their birthday, the iris and the violet.

The violet has a charming and long history in mythology. Greek myth states that Zeus fell in love with Io. Zeus was afraid that Hera, his wife, would discover him and Io, so he made Io into a white heifer. Zeus created the sweet scented flower that we know as the violet for Io to eat while she was a heifer. Hera placed an insect pest on Io as the white heifer, so she roamed all over the land trying to free herself from the pest.  Zeus finally caught the heifer and put his hand on her, and she turned back into Io. She gave birth to their child, who founded many nations.

Another Greek myth states that Persephone, a young lady, was walking in a field of violets when Hades saw her and fell in love with her. Hades took her to his kingdom of death and the world became barren. Hades allowed Persephone to return in the spring, and the violets returned as well. However, Persephone must go back to Hades at the end of autumn, and world becomes barren until she returns again in spring. 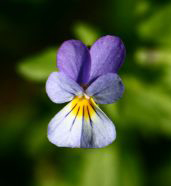 In the Middle Ages, the violet was a symbol of humility , chastity, faithfulness and modesty, and was a symbol for Mary, Jesus’s mother, who is known for these attributes. It is easy to see how these traits became associated with this plant when you look at a violet in bloom. The blooms are pretty much under the dark green, heart-shaped leaves, and appear to peek out from under the leaves. The plant is small in stature and not bright in color.

Violets are also self pollinators, meaning that a bee or other plant is not necessary for the violet to bloom. This symbolizes the belief of the virgin birth.The violet also has meanings of immortality, resurrection and spring.

A real love story, with violets, is that of Josephine and Napoleon Bonaparte. The favorite perfume of Josephine was violets. Violets were planted in the beautiful gardens that Josephine planned in France. When Napoleon visited Josephine’s grave he picked violets to leave on her grave. When Napoleon died, in his locket were violets and a lock of Josephine’s hair. That is real romance. Perhaps that is why violets were chosen for the month that celebrates love and romance in a single day day called Valentine’s Day.  Violets later became a heraldic symbol of Napoleon and his family.

In the Victorian era, words of romantic expression were discouraged, so the language of flowers was very important.  Purple violets meant “I’ll always be true,” and violet and cream-colored violets said, “Let’s take a chance.” 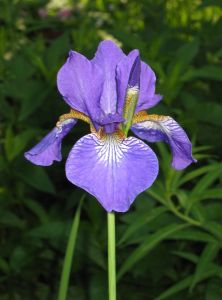 Iris is the other February birthday flower. Symbols of iris are known to exist on Egyptian ancient buildings.

In ancient Greek mythology, Greece Iris was the messenger between the gods and the earth. The rainbow became the outward visible symbol of Iris.

In heraldry, the iris is also known as a fleur-de-lis.

The iris has three upright petals that symbolize faith, valor and wisdom. The deep color is a promise of spring luxuries yet to come. If a bouquet has white iris mixed with purple, it symbolizes the remembrances of winter past, along with spring’s promise. If gold iris is also added to the bouquet, it adds the dimension of passion to the mix, along with a visually stimulating color blend.

The iris blooms come in many colors, but the blue or purple iris is the main birthday flower color for February.

The photos of violets are from Paolo Gadler and the photo of the iris is from Eveline Lippet.

7 Comments on “Explore the symbolism of February’s birthday flowers: violet and iris”