Sharon M. Webber, CNLP was once called to a home with a problem. It had a fairly new landscape, installed just two years before, but the plants weren’t thriving. In fact, normally tough and sturdy varieties of plant, such as forsythia, spirea, day lilies and even black-eyed Susans, were declining, big time.

When you want to know why, she said, “Always go to the soil.”

It turned out the initial installation had used soil pulled from a construction project at the airport.

Since there were already so many bushes, bulbs and plants installed, Webber couldn’t simply start over; she had to work around what was already planted. Her solution was to top dress the landscape with high-quality compost twice a year for two years.

It took work, time and patience, but by the time she was done, she said, the soil was so soft you could use your hand to dig a hole.

This drove home an appreciation for the importance of good soil that an older nurseryman summed up this way: “Never put a $50 plant in a $5 hole.”

Webber, a freelance horticultural consultant, has worked in horticulture for more than 25 years. She is the board president for Grassroots Gardens of Buffalo; co-founder of Plantasia, Western New York’s premier garden show, and a past president of the Western New York Nursery & Landscape Association and a former trustee of its foundation. 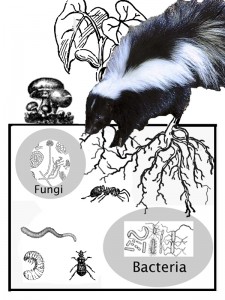 Soil is dynamic and incredibly diverse, she explained. It’s made up of not only mineral matter, but organic matter, water and air as well. Soil is affected by the roots of plants that grow into it; the organisms that live in it, including bacteria, fungi, insects and earthworms, and by the mammals that burrow and dig in it– like the skunk from her own yard.

“You get unbelievable chemical, physical and biological reactions and interactions,” Webber said. “There’s a lot of stuff going on there.

“In a nutshell, soils support plant and animal life both above and below the ground.”

Here are some ways you can help care for the soil in your yard:

When looking at the causes of compaction, “Foot traffic and machine traffic is huge,” Webber said.

Construction work around your home, such as installing a foundation, putting up a new fence or having roofing work done, can compact the soil.

Even everyday activities such as walking and mowing can cause compation. Try to minimize random foot traffic in your garden beds by laying stepping stones or other pathways. When you mow your lawn, change the direction every now and then, she suggested.

If your soil becomes compacted, trying to fluff up the soil by digging into it may not always work, Webber said. The best thing to do is to incorporate organic matter. That leads us directly to the second way you can help maintain great soil.

Compost is one way to add organic matter; adding well rotted manure is another way. Read more about composting.

The worst thing you can do is to run out and get pesticide the moment you sense a problem in your garden, she said, since pesticide leaves a residue.

On the other hand, “While we want a pesticide-free environment, there are some things we can’t grow without it,” Webber said.

“It’s a balance. You try to do it in the least toxic way with an understanding of the long-term consequences of what we do.”

The Western New York Land Conservancy marks its 20th anniversary this year. Its speaker series is held at the Theodore Roosevelt Inaugural National Historic Site. Roosevelt was a leader in conservation.

The next talk in the series will be held at 5:30 p.m. on Monday, Feb. 7. Lynda Schneekloth, professor emeritus of the School of Architecture and Planning at the University at Buffalo. She will discuss the source of source of our contemporary land ethic (or lack thereof) and ways in which we, as ordinary citizens, can revitalize our urban and rural Western New York places for future generations.