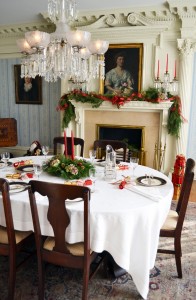 When you have 12 different garden clubs decorating the rooms of a mansion, how do you assure that the house will have a coherent look?

At the Theodore Roosevelt Inaugural Site, they choose a theme and colors. This year’s theme is “A Visit From St. Nick” and the colors are red and gold.

That color scheme can be seen in the elegant dining room at left, decorated by the Lancaster Garden Club. The portrait is of Frances Wilcox, daughter of Ansley and Mary Grace Wilcox, who owned the mansion where Theodore Roosevelt was inaugurated in 1901.

The Santa Claus theme can be seen in the wreaths made by the Amherst Garden Club, which are displayed on the front doors of the mansion. (See photo below right.)

The Bowmansville Garden Club used Santa ornaments on the huge tree that greets visitors to the Inaugural Site, and they grouped Santa figures by the window. (See photo below left.)

Many of the Santa figures used in decorating the mansion were lent to the clubs by Jerry Sullivan, a volunteer at the Inaugural Site, who has a collection of about 4,000 Santa Clauses. (He also gives presentations on the history of Santa Claus.)

In addition to the theme and colors, garden clubs were challenged to capture the spirit of the era.  The Orchard Park Garden Club decorated a tree with fans and tussy mussies, objects that were emblematic of the times. A fan was a fashion accessory at that time, and tussy mussies, small bouquets of flowers, were popular as well.

The clubs generally followed the rules of the Federated Garden Clubs in their creations, with a few exceptions. For example, they would normally use real berries in wreaths and swags, but the Inaugural Site asked them not to–  If the berries fall on the carpets, they can stain.

The question of real versus artificial goes all the way back to the turn of the last century. Here is advice to housewives on creating the perfect Christmas dinner, published in the Buffalo Evening Times on Dec. 22, 1905:

“The entire table is to be so decorated with red and green that it will seem to fairly radiate the Christmas spirit. Artificial holly is now being used instead of the real–it is a bit more expensive but lasts over from season to season without losing its luster.”

The decorations created by the Hamburg Garden Club, left, use fresh and dried natural materials– except for the berries.

The entrance to the second floor was decorated by the Willowridge Garden Club. That area features door hangings, seen below right. The area is festooned with red drapes held back by rings of holly as well as lavish swags of evergreens accented by yards of wide ribbon in red and gold.

These decorations reflect the opulence you might have seen in a Buffalo mansion at that time. The newspapers at that time ran long stories on the parties of the upper class. Here’s an excerpt from an article published by the Buffalo Evening News on Dec. 26, 1900, describing the debutante ball hosted by Mr. and Mrs. John J. Albright:

“Mountain laurel, smilax [a vine], holly, ground pine and mistletoe lined the interior of rooms’  arched doorways and windows and wound stair railings. Mistletoe hung from chandeliers and flowers were everywhere. … A temporary supper room had the effect of a tropical garden, with scarlet flowers and satin ribbons and ferns for the table decorations.”

To decide which garden club decorated which area of the mansion, a lottery was held. The club drawn first chose the area they’d like to decorate, the second club chose from the remaining areas, and so on, explained Adrienne Pasquariello, who, with Barbara Wiedemer, is chairing the gardeners’ decoration of the mansion.

Betty Nosbisch, who chaired or co-chaired the gardeners’ decorations for 13 years, died Oct. 2 at age 88.  She was the motivating force that developed the garden clubs’ role in the Victorian Christmas.

Outside judges will choose winners, and the public can vote as well. Winners will be announced in April.

The decorations can be viewed until Dec. 30 at the Theodore Roosevelt Inaugural Site, 641 Delaware Ave., Buffalo. The  museum may be visited by guided tour only. Tours are scheduled every hour on the half-hour, beginning at 9:30 a.m. weekdays and 12:30 p.m. weekends. The last tour is at 3:30 p.m. Group rates are available.