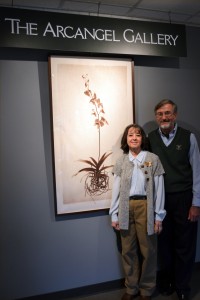 The Arcangel Gallery, a new art exhibit space, was dedicated on Friday at the Buffalo and Erie County Botanical Gardens, 2655 South Park Ave., Buffalo. Local artists will have an opportunity to display their work.

The gallery was named for Brent D. Arcangel, who died at age 23 in a car crash caused by a driver who fell asleep at the wheel. The space was dedicated by his parents, Wayne D. and Corrine Arcangel of Hamburg, seen in the photo at left. Wayne has been a strong advocate for legislation to prevent  drowsy driving.

“Losing a child means losing a part of who you are,” Corrine said during the dedication ceremony. “The tapestry of our family has become unraveled. It’s now a patchwork quilt with some holes that we’re struggling to fill. I was grateful that the Botanical Gardens was here as I was coping with Brent’s death.”

As a volunteer, she found digging and planting to be great therapy.

“It was such an oasis of tranquility,” she said.

As she struggled to cope, Corrine found that, as a mother, she still worried about her son. One day, she took a planter of wax begonias to the cemetery where Brent is buried.

A butterfly fluttered around and landed on the planter. After a bit, it left. It felt like a message from Brent.

In the car driving home, Corrine sat at a signal and began to doubt the meaning of what she had experienced. Was it really true? Then she felt something fall out of her hair– begonia petals.

When it came time to design a logo for the new Arcangel Gallery, Wayne and Corrine knew the logo should include butterflies, which are symbolic of hope and new beginnings.

Corinne  remembers Brent as “one of those kids who won everyone’s heart. He had a smile and a high five for everyone.”

Brent completed his undergraduate studies at the University at Buffalo, and received a master’s degree in career counseling from UB.

“We’re proud of the man he became,” Corinne said. “We are privileged and blessed to have had Brent in our life for 23 years. We miss him.”

During the ceremony, Jim Tilley, executive director of the Botanical Gardens, said that the people at the Gardens have many dreams. One of those dreams was to have a place to exhibit photos and artwork.

“Those dreams can come true, but you often need an angel for that to happen,” Tilley said.

When he mentioned the idea for the gallery at a volunteer picnic, the Arcangels immediately stepped forward to be benefactors.

“We feel so privileged that the Botanical Gardens offered us the opportunity to provide a memorial to Brent in such a beautiful setting,” Corrine said. “We can’t help but think that Brent is smiling down on us.”

What is now the gallery had been just a pass-through space for people to get from the dome to other exhibits. The intimate gallery now gives people a reason to slow their pace.

The first exhibit in the Arcangel Gallery is Mandolfo’s show, Botanicals: An Alternate View.  This photography exhibit is based on Mandolfo’s fascination with nature’s shapes and textures. He pulls out details and beauty found in natural objects to yield powerful, unique and unexpected images.

“My interest lies in exploring nature and creating photo illustrations that invite the viewer to look at everyday objects in a new way,” Mandolfo said.

Mandolfo is originally from Syracuse and came to Buffalo in the early ’80s to study fine art photography at UB. With more than 25 years of experience, Michael has perfected the craft, creating brilliant and unique images.

Already a successful commercial photographer, Michael has achieved national and international recognition.  His work has appeared in Times Square, in hotels in Las Vegas and New York, and across Europe and Japan.

The intent of the Arcangel Gallery is to display photography and/or artwork that reflects the Botanical Gardens, its horticulture residents, nature in general, Western New York life, Buffalo architecture and more.

The gallery is open to the public daily from  10 a.m. to 5 p.m.  and open to all after-hours events.