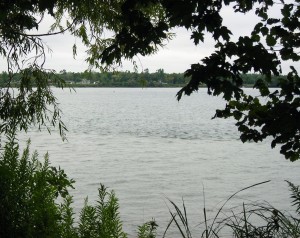 Clean water is a precious commodity, and as a gardener, you can play a role in conserving in the Great Lakes.

That was the message of Larry Brooks, who does communications for Buffalo Niagara Riverkeeper (now Buffalo Niagara Waterkeeper), in a Gardening Mondays talk downtown at the Buffalo and Erie County Public Library.

Living on the shores of the Niagara River and Lake Erie, it seems that water is one thing we shouldn’t have to worry about.  After all, one-fifth of the available fresh water on earth is located in the Great Lakes.

However, “99 percent of the Great Lakes water is left over from the glaciers,” Brooks said. “It’s not renewable. Only 1 percent is renewed by rainfall and snow melt.”

Other threats include land development, which can cause loss of natural habitat; invasive species;  climate change, and pollution.

When many of us think of Great Lakes pollution, we think of factories. While industrial activity on the lakes has decreased, Brooks said, mercury is still entering the water from coal-fired power plants. Pharmaceuticals pose another pollution problem. People take medications and excrete them in urine, but water treatment plants aren’t able to filter out these compounds. 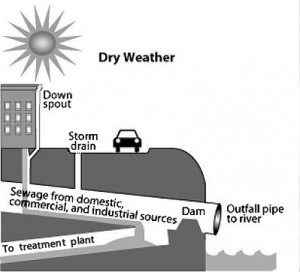 However, the number one pollution problem for the Great Lakes is a threat gardeners can do something about– sewage runoff.

“Four billion gallons of raw sewage winds up in the Niagara River every year,” Brooks said.

Gardeners can help by keeping rain water out of the sewage system.

To understand why, look at these diagrams from the U.S. Environmental Protection Agency. You can see that the storm water system and sewer systems are interconnected. It would have been too expensive to design the systems for peak capacity on the rainiest days, so they were designed for normal capacity, Brooks explained. 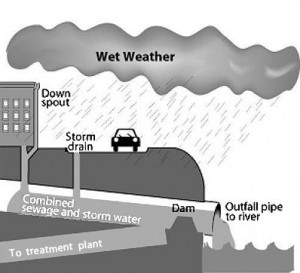 When it rains, the capacity can be exceeded. To keep the water from backing up into your house, a relief valve dumps raw sewage directly into the river.

It’s too expensive to redo the entire sewage system, so we have to do what we can to keep rain water out of this system.

“If rain was retained where it fell, we wouldn’t have a problem,” Brooks said.

Some of the ways gardeners can “keep rain from the drain” are:

Rain barrels collect water from the downspout on your house.The water dumps on top of the barrel and gets inside through holes in the lid. A screen helps keep out leaves.

You can use the tap on the rain barrel to fill a watering can,  or you can attach a soaker hose, as in the photo at right.

Brooks said a gardener can save $34 on water during peak summer months by using a rain barrel. If you have a large roof, your savings could be higher.

You can make a rain barrel yourself, or you can buy a rain barrel from Buffalo Niagara Waterkeeper for about $100. It would take about three seasons to recoup your investment.

Each barrel holds 60 gallons. If you want to use more than one barrel, you can connect them.

Because freezing water expands and could cause the barrel to break, during the winter you must bring the barrel inside or flip it upside down so it doesn’t fill.