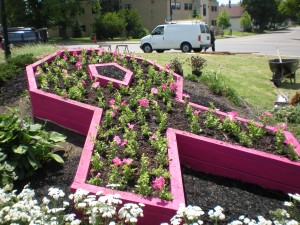 A fundraiser for the Breast Cancer Awareness Garden at the Buffalo Central Terminal will be held from 11:30 a.m. to 5 p.m. Saturday, Aug. 7 at the former train terminal, 495 Paderewski Dr., Buffalo.

The garden, a project of the Buffalo Federation of Women’s Clubs, is an open garden for the National Garden Festival and was featured by Buffalo in Bloom. (It’s also not far from the Front Yard Competition on North Parade in Buffalo, so you might want to plan seeing those front yard makeovers while you’re at the Breast Cancer Awareness Garden.)

Sip N Shop, the third annual fundraiser for the garden, is a wine tasting experience featuring wines from eight New York State wineries, craft vendors, music by the Pocket Change Trio, a farmers market,  a state  representative for unclaimed funds, snacks and a basket raffle. You can also tour the terminal.

Doors open at  11:30 am. and the wine tasting starts at noon. Tickets are $15 and are  available at the door or online at BrownPaperTickets.com. There is plenty of parking.

The money from the fundraiser goes to maintain the garden, located at the intersection of Memorial Drive and Paderewski. The volunteers have been carrying water to the garden, and they may invest in a sprinkler.

The garden was started by the federation in 2004. Two of the volunteers, Patricia Klebes and Carole McDade, both of Buffalo, are breast cancer survivors.

They are pleased that their efforts with the garden and distributing information have helped raise awareness for the prevention and treatment of breast cancer in the neighborhood. 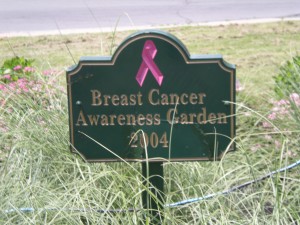 “We’ve had people walk up to us and say, ‘You saved my wife’s life,'” McDade said.

“I feel what we’re doing outside is as much a part of the restoration of the terminal as what they’re doing inside,” McDade said.

McDade realized their gardening efforts were making a positive impact on the neighborhood at the federation’s first fundraiser. A group of teen boys walked up to the guests, and McDade admits she felt intimidated. But the teens thanked them for coming into their neighborhood, and shook hands with everyone there.

People from the nearby Broadway Market have helped provide dirt and plants for the garden. Neighbors help with the weeding. The city has provided help from teen workers.

The teens “call us the Hope Ladies because we’re bringing hope,” McDade said.