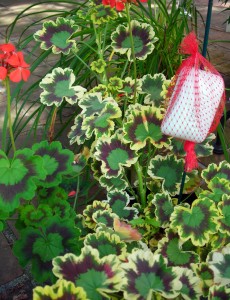 Commercial products, homemade mixtures and soap on a rope were among the methods to repel deer shared by Chris Hartmann, a member of the East Aurora Garden Club, in an educational exhibit called “Deer at the Corner of the House.”

The exhibit was part of the Poetry & Posies standard flower show held by the East Aurora Garden Club Saturday and Sunday, July 31 and Aug. 1.

Soap on a rope, hair and Mylar

Hanging strongly scented soap near your plants, as shown in the photo at left, is one way to try to protect your garden from deer.  (Sylvia Jakubiak, another member of the club, noted that the netting is a good idea. When she placed the soap in her own garden without netting, the woodchucks ate it. )

A variation on that idea is putting human hair or dog hair in the netting (see photo below). It should be unwashed, stinky hair, Hartmann recommended. You can also try hanging strips of shiny Mylar.

The best way to keep deer from eating your garden plants is to choose landscape plants that they don’t like, Hartmann said.

The plants she recommends as being deer resistant are: 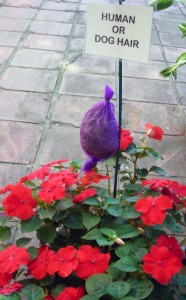 Her list concludes with a cartoon of a deer saying, “But we can’t read!” These plants are deer resistant, not deer proof.

“If it’s a particularly bad winter, they will eat things they’re not supposed to,” Hartmann said.

You can fence off plants with netting, which makes it difficult for the deer to get at the plants, she said. This is your best bet in winter because many sprays don’t work when the temperature drops below 40 degrees Fahrenheit.

Hartmann recommends reapplying most sprays once a week until the deer are “trained” to leave the plant alone because of its bad smell or taste. After that, you can apply less often. They generally must be reapplied after it rains.

Liquid Fence. This is a spray that several East Aurora Garden Club members have found effective. Liquid Fence claims to be environmentally safe and biodegradeable. It does have a couple of drawbacks, though. It’s expensive, Hartmann, noted. Sylvia Jakubiak  said the smell makes her nauseated.

Homemade deer repellent. This mixture has many of the same ingredients as Liquid Fence, Hartmann said, and it is less expensive.

Homemade Deer Repellent Recipe
2 eggs
1/2 cup milk
1 tablespoon cooking oil
1 tablespoon dish soap
1 or 2 cloves garlic
3 teaspoons cayenne pepper
Combine the ingredients in a blender and liquefy. Put it in an old milk jug. Set it out in the sun for two to three days to let it cook and get really stinky.

Strain if you want to use it in a sprayer. Add water to make a gallon. Spray, or pour it on the plants directly from the jug.

Deer Fortress. Deer Fortress is a scent-based product in a contained unit (see photo at right). Jakubiak said it worked for her until it was empty. It didn’t work in Hartmann’s day lilies, though it did work for a friend of hers.

Even when you find a method that works, you should change the product or technique every few weeks, Hartmann said. Deer are often able to learn to tolerate bad tastes and may nibble on your plants despite sprays.

In the end, none of these methods are foolproof ways to keep deer out of your garden. Hartmann takes a philosophical view.

“Actually, they were here first,” she points out.