One garden in front of Cherie St. Pierre’s home at 3881 Bailey Ave., Eggertsville, is positioned near a large tree and used to be in deep shade.

“I couldn’t grow a thing in this area,” she said. “The good thing about that terrible storm is that it took out a branch.”

Without her saying anything more, those of us who experienced that storm know immediately that she is referring the October Storm of 2006. Thursday, Oct. 12 started out as a fine autumn day, then more than 18 inches of heavy, wet snow unexpectedly fell on leafy trees, bringing down branch after branch and toppling whole trees. The Eggertsville area of Amherst, with its mature trees, was especially hard hit, and gardeners are still dealing with the storm’s aftereffects.

You can see how it has affected St. Pierre’s gardens if you stop by during Open Gardens, a program of the National Garden Festival. Private gardens are graciously made available to the public on a particular day at a particular time. Visitors are allowed to simply drop by. St. Pierre’s gardens are open from 5:30 to 8 p.m. Thursday, July 8, 15 and 22.

While the loss of a branch during the October storm actually helped one garden, its effects were less positive in other areas. Two weeks ago, St. Pierre had to concede that her 30-year-old weeping cherry damaged in the storm simply couldn’t be saved.

“I gave it four years,” she said. A large pot of annuals attempts to fill the space in her front yard.

As you walk along the driveway to the back gate, you may notice large flat stones arranged at the base of a tree. 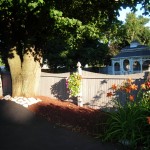 St. Pierre painted the rocks white because they’re easier to see at night. It makes it easier for her guests to see the tree when they’re backing out at night. The gazebo that you can see over the fence is part of the property next door that she owns as well.

St. Pierre’s backyard features a spectacular waterfall. When people see her beautiful yard, they often ask whether it’s a lot of work. 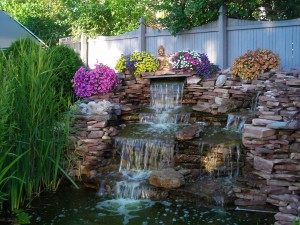 “It depends on what your concept of work is,” she replies.

She said the water is cloudy and she is fighting string algae because the pond is in the sun. She is also fighting voles in her yard by using poison. To keep pesky rabbits at bay, she sprays with a rabbit repellent.

Potted annuals add a whimsical touch to the backyard. She uses portulaca because the dirt in the ceramic pots tends to dry out quickly, and portulaca can stand dryness. 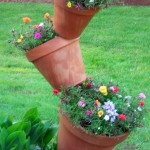 St. Pierre also owns and rents out the home at 3879 Bailey Ave., on the corner of Main St.  (You can see the gazebo on that property in the photo that shows the white rocks under the tree along St. Pierre’s driveway.) The structure was built in 1925 as the real estate office for the homes that were being built in the neighborhood, and the building was used as business offices until she bought it a few years ago. 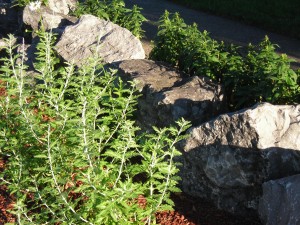 Because it is such a busy corner, St. Pierre had some concerns about the possibility of a car jumping the curb and hitting the house. She didn’t want to build a fence, so she placed large rocks in the border garden, which serve as both a safety device and  decorative element.

One plant from that border garden that she especially likes is Russian sage. It is just coming into bloom now, and you’ll have blue flowers for a long time during the summer. 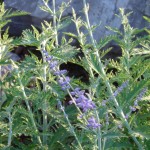 St. Pierre’s gardens were also part of the Samuel P. Capen Garden Walk on Saturday, July 17. The walk is presented by the University Heights Collaborative, the Eggertsville Community Organization and the University at Buffalo.