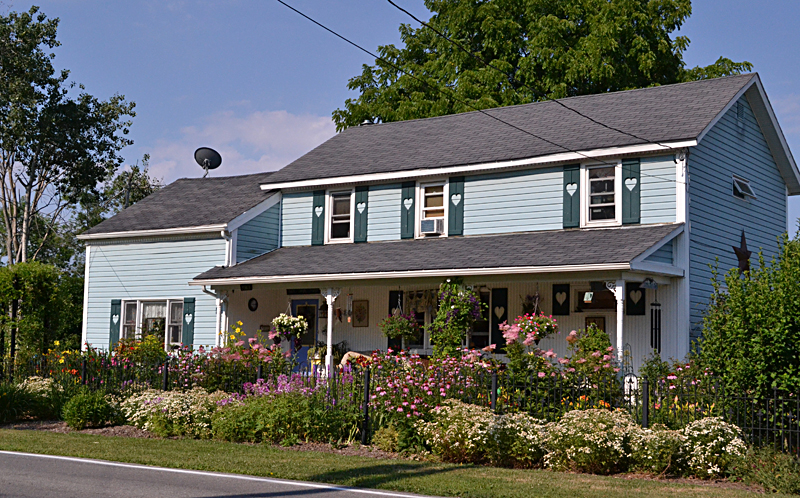 Grassless front yards aren’t seen only in the City of Buffalo. A profusion of flowers fills most of Catherine Klein’s front yard in a semi-rural area of Clarence. 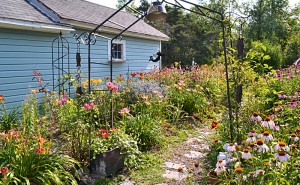 “You don’t need grass,” she said. “Grass is green. Flowers are colorful.”

As you’re planning your garden for this summer, take inspiration and some tips from Catherine.

Catherine and I are related. Her father-in-law and my late father were cousins, which makes me and Catherine second cousins by marriage (or something). I took these photos in July 2012 when my sister and I stopped over at Catherine’s house.

Catherine’s gardens extend along the side of the house and into the huge backyard on their one-acre lot. Above left is a path lined with flowers that runs between the house and the garage. This view faces the street.

She didn’t get these gardens all at once. It has taken more than a decade to create these wonderful garden beds.

She claims that her husband Greg didn’t want anything to do with gardening and dug up just a small strip for her to use as a garden. 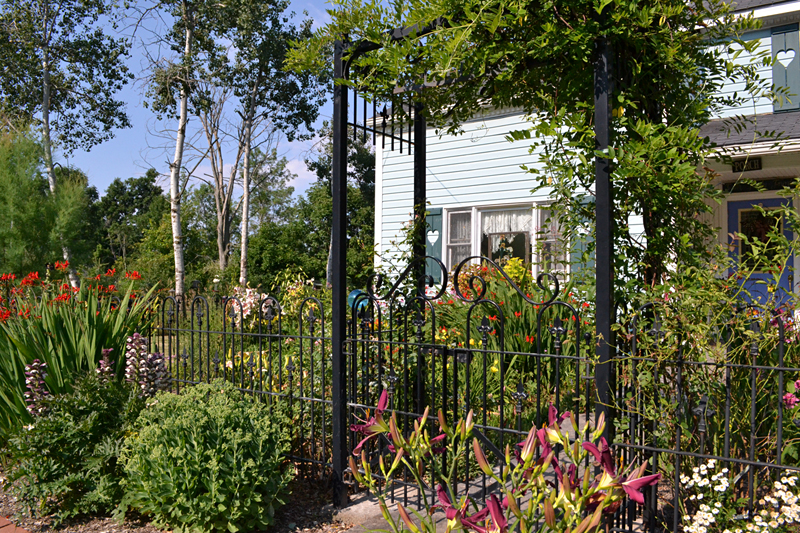 When Catherine wanted a larger garden dug, she would ask Greg, but he would resist. She would keep up her pleas until one Saturday he would wake up at 6 a.m., put his boots on and announce, “Let’s make a garden.”

As you can guess from the extent of the gardens, these day-long digging sessions happened more than once. 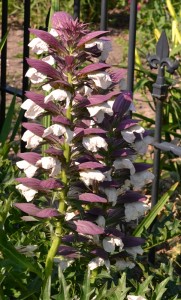 “It’s going to cost you more,” she said, “but you should get really good garden loam. If you start with a good base, that’s half the battle.”

The handmade Amish fence seen above is practical as well as decorative. Cars sometimes speed down Strickler Road, even reaching 100 miles per hour, and Catherine was afraid that one might some day crash into the house. The wrought iron fence adds some protection.

One of the plants along the fence can be seen at right. It’s called bear’s breeches and is a heritage or heirloom plant. Heirloom plants are varieties that were grown before widespread hybridization.

Catherine’s gardens are established now, so she doesn’t spend a lot of time maintaining them.

Many of her perennials are low-maintenance choices such as day lilies, which are drought resistant. She groups many fragrant Asiatic lilies near the window where she can enjoy the perfume from the garden. You can get a glimpse below. 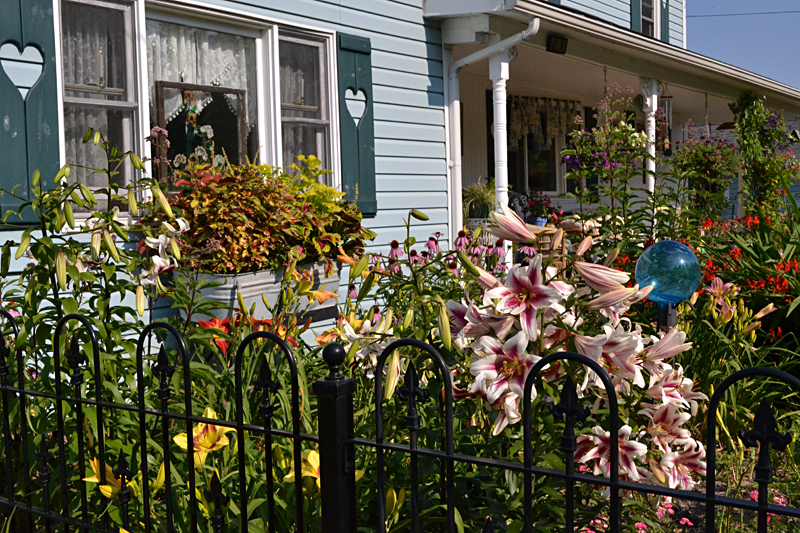 While I photographed her gardens in July, that’s not the only time she has flowers. Her gardens start blooming in early March with Lenten roses and continue blooming through November.

“I just wake up every morning and get a different present each day because something new is blooming,” Catherine said. 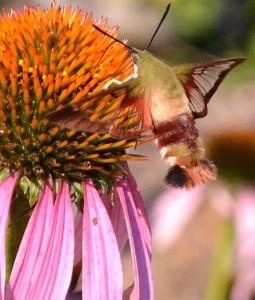 She tries to keep her garden as natural as possible, and you’ll see wildflowers among her cultivated varieties. She makes sure she has water available for birds and butterflies and doesn’t use insecticides.

At right is a hummingbird moth, an amazing creature that I had never seen before. You’ll also see bees flying from flower to flower and dragonflies darting about.

“Isn’t it great to see a garden that’s working?” she said.

22 Comments on “Luxuriant gardens in Clarence were built slowly, filled with perennials”