Gardeners don’t think of plants as moving creatures. After all, plants can’t pull up their roots and scoot over to a more pleasant spot in the garden.

But plants do move.  Plants stretch and bow and bend as they search for light, and they move in other ways, too. Unfortunately for us, their movements are so slow that we miss their graceful dance.

With the help of time-lapse photography, you’ll get an amazing look at the plant world during “The Unstill Life of Plants,” a presentation to be held at 7 p.m. Thursday, Oct. 6, at the Buffalo and Erie County Botanical Gardens, 2655 South Park Ave., Buffalo.

The event is sponsored by the Buffalo and Erie County Botanical Gardens, Cornell Cooperative Extension Master Gardeners of Erie County and 8th District Federated Garden Clubs of New York State. Admission is $20 for members of the sponsoring organizations, $25 non-members, and $10 for students with ID. You can buy tickets online.

The presentation will be given by Dr. Roger P. Hangarter, Chancellor’s Professor of Biology at Indiana University, who uses time-lapse photography in his research on plants. The image at the beginning of this article shows a passion flower opening. You can see the video from which this sequence of stills was taken at his website Plants in Motion.

“The things that plants do, they do very slowly,” Dr. Hangarter said. Using time-lapse photography allows us to speed up the movement of plants and see them in a time frame that’s easier for us to relate to.

“We’re so used to seeing plants as static objects, or even decorative objects, that we don’t think of them as real living creatures,” he said.

On a site created to accompany the traveling exhibition Slowlife, Dr. Hangarter shows time-lapse imagery of a vase of tulip buds, whose stems writhe and rearrange themselves as the flowers open. He compares it to an oil painting of tulips in a vase, which is of, course, considered a still life. 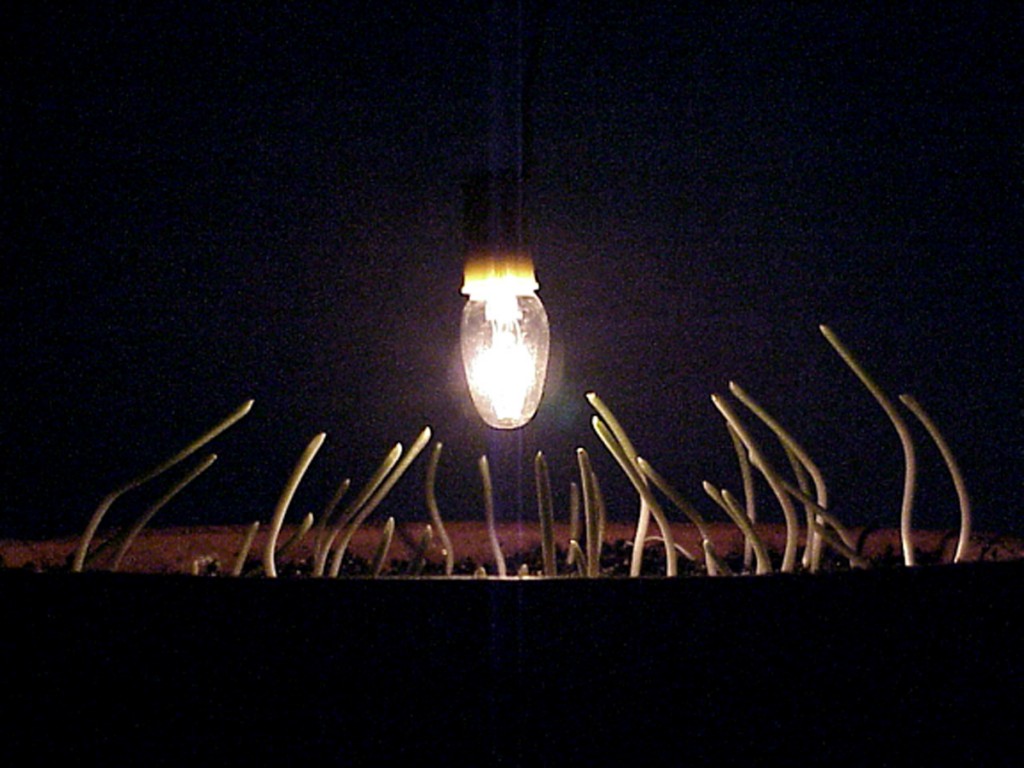 In his photo directly above, corn seedlings bend toward the light. This still is taken from a video called Sun Worship.

As gardeners, we are probably attuned to plants and seedlings bending toward light, but plants move in other ways as well.

Nastic movements occur in response to environmental stimuli. These are some the most spectacular plant movements. A Venus Flytrap snapping shut when it captures prey, or the folding of the mimosa leaf when it is disturbed, are fast-paced examples of nastic movements.

Equally fascinating (when it’s slowed down enough that you can see it) is the nastic movement of the tendril of  a morning glory vine as it swings round and round, lasso-like, until it finds a support to attach to.

“The time-lapse photography makes it clear that plants are incredibly responsive to light and touch and other aspects of their environment,” he said.

“They navigate to find resources such as minerals and water,” Dr. Hangarter said.

Plants also have interactions with other organisms, such as pests.

“Plants are constantly making adjustments,” he said. Much of these adjustments happen at the cellular and molecular level through biochemical activity. He gives us a glimpse into that microscopic world as well.

While there are many fascinating videos on the Slowlife and Plants in Motion sites, Dr. Hangarter will bring even more videos to the talk, including a video on a pumpkin plant that he’s working on currently.

While plants are among the slowest creatures on earth, the fastest motion ever recorded in a living organism was in a plant, Dr. Hangarter said. A boxwood flower, when touched, explodes open and shoots pollen into the air.

While plants are fascinating, Dr. Hangarter likes to remind people how very important they are.

“We wouldn’t be here without them,” he said. “I sort of feel like a plant evangelical.”

The majority of research dollars in biology are spent on human or medical research, and only a tiny amount is spent on plant research, “but our health and nutrition starts with plants,” he said. “To feed a growing world filled with hungry humans, we have to know what plants are doing.”

2 Comments on “The Unstill Life of Plants: Get a look at all the movement you’ve missed”