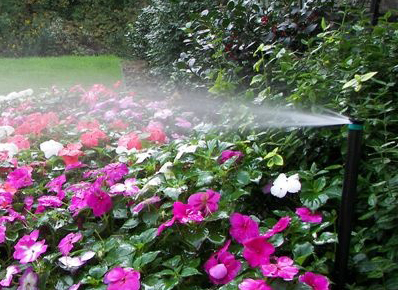 In May, my garden was so boggy I thought I’d never have to water again.

In June, my garden was hard as a rock.

In July, we had that hot, dry spell.

During the past week, we finally got some rain, but there wasn’t much. You should have been watering, too.

If you can’t keep up with the erratic watering needs of your garden, you may want to consider an underground sprinkler system that operates automatically.

There are several advantages to such a system, said Jay Few, service technician at American Irrigation, Inc.

Keeping up with the weather

A rain sensor on the irrigation system measures approximately how much precipitation we’ve received. If the sensor is set for 1/8 inch of rain, the system won’t run if it detects that much rain or more.

If the rain continues to the point where the rain sensor detects enough precipitation, the system will turn off. The system may remain shut down for several consecutive wet days, then pick up when the rain sensor has dried out sufficiently.

Watering at the right time of day

We know that watering in the heat of the day can waste water because it evaporates quickly. Watering at night can promote the growth of fungus and other plant diseases because leaves stay damp. So when should you water?

“The best time to water is early morning– 1 or 2 or 3 a.m.,” Few said. “You want to water so that when the sun comes up, it’s already starting to evaporate.”

When he helps residents program new irrigation systems, he sets the watering to finish as close to sunup as possible without interfering with the residents’ morning routine. (You don’t want to send all the cold water to the garden and have the resident surprised with a scalding shower.)

Watering plants according to their particular needs

Different plants need different watering regimens. You might water a lawn three times a week, but water flowers and shrubs for five or ten minutes every single day. An irrigation system can be programmed to meet the needs of the various plants in your yard. 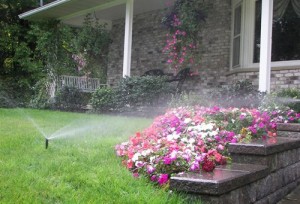 Roses are especially vulnerable to black spot, a fungal disease. Around roses, you could use a certain kind of head called a rose bubbler, which waters the root network instead of watering over the top of the plant.

A different kind of head called a rotator can spray large areas of lawn. Other kinds of heads can make sure that water gets all the way to the back of your border.

Few said he saw a residential complex where the community association required residents to water. To comply, residents set out hoses for hours at time. The unfortunate result was rivers of water that ran off the soil and down the street.

An automatic irrigation conserves water because it can be programmed to run for certain periods of time. The timing can be tweaked to take into account your soil content, slope, the sunniness of the area and other factors.

The price of an irrigation system varies according to how extensive the system is, but on average it costs between $2,500 and $3,500 to do a residential yard, Few said.

Systems can be installed during the summer, fall and spring. American Irrigation offers free estimates.

1 Comment on “Garden been too dry? Underground sprinkler system can help”