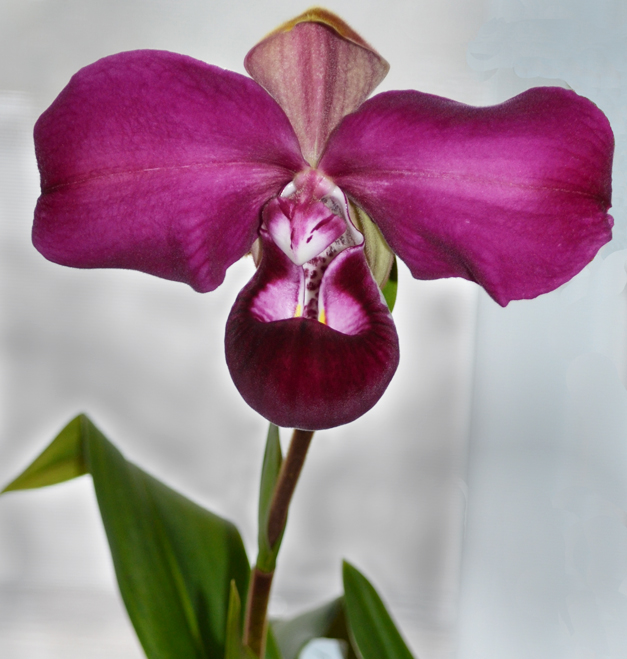 “The whole reason I got into orchids was that it gave me the ability to play in the wintertime,” said Joseph A. DiDomenico Jr., president of the Niagara Frontier Orchid Society.

You can have fun gardening inside with orchids, too. In a previous article, we explained how easy it is to grow orchids, even during winter in the Buffalo area.

In this article, we’ll take a peek inside DiDomenico’s large greenhouse at his home in Elma to see some of his unusual orchids. We’ll also get a better understanding of how orchids grow in their natural environment.

The orchid pictured at the beginning of this article is DiDomenico’s prized orchid, Phragmipedium kovachii, the largest slipper orchid in the world. It was discovered in 2002 and is quite rare. 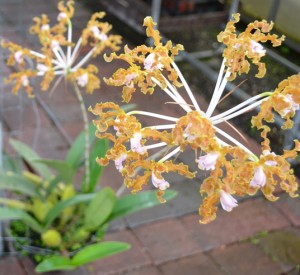 Michael Kovach, for whom the plant is now named, set off an international incident when he brought the plant from Peru to the United States. He was charged with smuggling an endangered species, and it took some time for the judicial issues to be sorted out.

“I had to wait to get a legal plant,” DiDomenico said.

DiDomenico has had his specimen for three years, and it is now blooming for the first time. After this amazing plant blooms, the flower increases in size and can be a foot and a half across.

Above right is a Schomburgkia orchid. This bizarre-looking plant is shoulder high. It blooms once from each bulblet, and the rest of the plant provides energy to the flowering bulbs, DiDomenico said. It can be seen in Mexico and Ecuador, where it  grows in huge clumps at the top of the tree canopy. 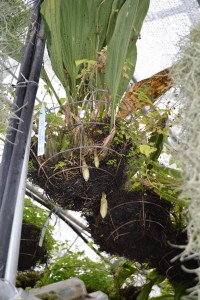 In their natural habitat, you’ll find orchids growing on trees, on rocks and on the surface of the ground, rather than tunneling into the dirt, DiDomenico explained. They are epiphytic;  that is, they grow above the dirt and use other plants or objects for support.

To accommodate orchids such as the Stanhopea orchid, seen at left, that naturally grow in the treetops, DiDomenico built his greenhouse with unusually high eight-foot walls.

In nature, the Stanhopea grows on a branch or in the crotch of a tree. You can see the bulblets or roots growing out of the bottom of the potting medium. When the plant blooms, the flower grows out of the bottom as well, DiDomenico said. Therefore, to best appreciate this orchid, you must look up at it.

Other orchids grow at streamside. DiDomenico has set up a system in his greenhouse that mimics that environment. 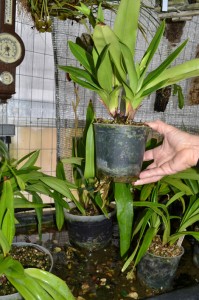 DiDomenico has a fish pond in his greenhouse. Next to the pond is a long tray layered with pebbles. Water is pumped from the fish pond onto the tray. As you can see in the photo at right, the roots of this South American slipper orchid snake out of the bottom of the pot so that when the pot is set in the tray, the plant can get moisture and nutrients from the water. The fish droppings help fertilize the plants, and the plants help filter the water. The water is circulated back into the fish pond.

More information on growing orchids is available on the website of the Niagara Frontier Orchid Society.

The first is Orchids for Dummies by Steven A. Frowine. The Niagara Frontier Orchid Society plans to have Frowine as a speaker at an upcoming event. The second is Orchids Made Easy by Ryan Lesque, which is also available as a pdf.