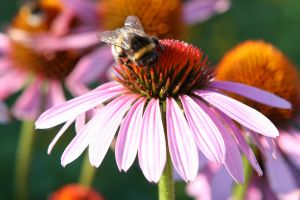 I tried an experiment this summer. I wanted to see how much difference it really made deadheading my flowers.

Until this past growing season I had been a dedicated deadheader (not to be confused with a similar-sounding fan of the Grateful Dead).  I’d pop off a few Coreopsis tops on my way to the car, bring the pruners with me to cut off spent Echinacea on my way to gather vegetables, and so on.

I became disenchanted with the process this year when those Coreopsis that had previously responded so well to the treatment gave me practically nothing in return this time around. Was it just this plant, or was deadheading unnecessary?  I decided to let the plants be and see what happens.

Here is what I found.

Echinacea (see top photo) was noticeably less floriferous when I left it un-deadheaded than in years past when I religiously removed spent blooms. However, I was treated to frequent visits by two pairs of goldfinches. The goldfinch families also frequented the Centaurea macrocephala seed heads that I left alone for the first time.

After my “Alaska” Shasta daisies bloomed, I let them sit for about a month before I cut them back to their basal foliage (which remains evergreen). This kind of Shasta daisy will not rebloom; I cut them back because the stalks were long and very dead-looking by that time and needed to be tidied up.  About a month afterward, I noticed a few small seedlings a few feet away where there had previously been a rather bare patch.  I now have about half a dozen new daisy plants.

Gardens can start looking a bit brown around now, and you may want to cut some plants back to make your garden look better. My herbaceous peonies are awful-looking now, and I cut them back. However, before they turned brown they were covered with powdery mildew. This is one of the few times that I throw away the clippings instead of spreading them in the garden—you don’t want to spread disease. Other brown items, like the Shasta daisies, can safely be spread.

For the winter, I  have always left most plants uncut. Not once has my garden ever been “smothered” by its own leaves sitting on the crown over winter.  The leaves naturally decompose and add nutrients back into the soil right around the plant where it is needed most.  When the snow has melted in the springtime, I pick up and throw out or compost the slimy leaves so that the wetness is reduced and less likely to cause rotting.

To answer the question: should you deadhead or cut plants? It depends on what you want to accomplish in your garden.

8 Comments on “To cut or not to cut: that is the question”