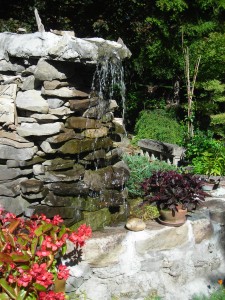 “As you can tell, I like the ripple of water,” said Jaime Pabilonia. He and his wife Linda have many water features in the gardens of  “Waterscape,” their Youngstown home.

Jaime and Linda, who have lived in their home for 40 years, started working on their gardens about 20 years ago.

“I’m the maintenance department,” Linda said. “He only notices the flowers; he doesn’t see the weeds.”

Jaime does the designing of the garden. 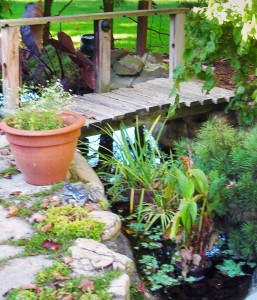 “Water is our main focus, so I started with that,” Jaime said.

The pond is home to six koi, some easily a foot long, that Jaime estimates to be about 10 years old. The pond is deep enough that he can keep it from freezing in the winter, so he allows the fish to stay outside during the winter. While he has lost some fish to the cold, the pond isn’t bothered by herons, perhaps because the couple has two dogs.

The waterfall, seen in the first photo, is made of stacked rocks with no cement. 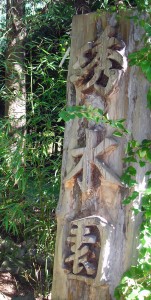 He’ll pick up rocks around the area as well as when he’s on vacation, and friends will tell them if they see rocks he might use.

The steps to his dock on the Niagara River are built with scavenged rocks and  bricks, too. The street divides the front yard from the river, and it’s a short walk down a hill to the spot where Jaime and Linda can canoe and swim, or just enjoy the view, seen in the photo above.

Sculptures are also an important part of the couple’s gardens. Jaime, who does Chinese calligraphy, created the sculpture at right, which says, “beautiful jade garden with water.” He got the wood from a friend– it’s left over from the Lake Erie ice boom. 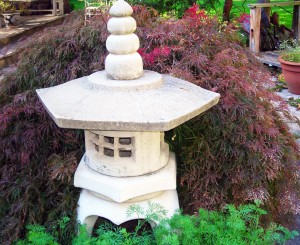 Jaime enjoys Japanese maples, and has ten varieties in his garden. At left is a weeping variegated Japanese maple. In spots, it is already beginning to turn a brilliant red.

Bamboo, which you can see in the photo below right, also adds Asian feeling to the garden, and it grows well in Western New York. It grows so well, in fact, it can be invasive. The sidewalk helps keeps the bamboo from spreading.

Jaime also enjoys unusual plants. In the photo below left, he and Linda are seated in front of a 30-year-old dawn redwood. 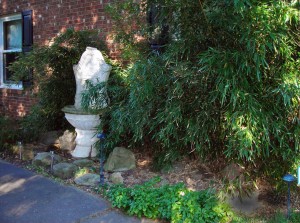 While so many people have already given up on their gardens for the year, Jaime is still happy to show visitors around his garden.

“A garden should be beautiful anytime,” Jaime said.

To accomplish that, you need a mix of annuals and perennials so that you have something interesting all year around, he said. Right now his garden is very green, “but there are many shades of green.” 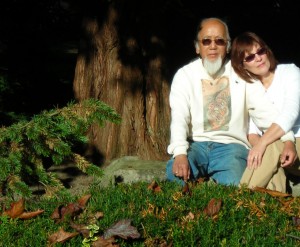 The structures, pathways and statues also add interest, he said.

If you’re just starting, Jaime suggests choosing a theme or focus. He uses water, rocks and an Asian influence, but your garden should reflect your personality.

“It should come out of your interests,” he said. “Just start somewhere.”

18 Comments on “Youngstown garden is influenced by Philippines”