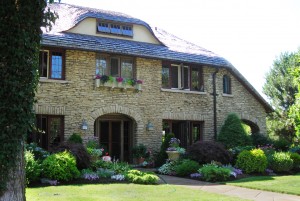 This Snyder house was once so overgrown that ivy had infiltrated through a window and was growing into the gold shag carpeting inside the house. But now the home boasts a tidy formal garden in front and lush English cottage gardens in back.

The home of Craig Coyne and Gary DiNezza at 31 Darwin Dr. was part of the Snyder-CleveHill Garden View in Amherst on Sunday, July 11. 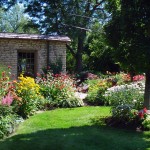 Though the property had been sorely neglected (there was a broken down school bus and scattered auto parts in the backyard), the home was worth saving. It was built in 1924 by Charles Burkhardt, one of the leading real estate developers of that time. He developed the surrounding neighborhood, naming streets after prominent scientists: Lamarck, Bentham, Audubon, Huxley, Burbank, Smallwood and Agassiz.

Since the roof was a mess when they bought the house about 12 years ago, Coyne and DiNezza had it restored to its 1924 style. It’s a wooden roof, made of white cedar shingles in a style called “American thatch.” To follow the curves of the roof, the shingles had to be steamed by hand and applied while hot. 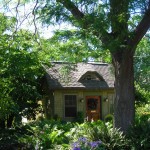 They used the leftover shingles when they built the garden house about two years ago, pictured at left. Notice how it has an “eyebrow window” in the roof that mimics the style of the house. The garden house, used to store tools,  is 10 x 14 feet and includes a loft.

While they retained some trees and bushes, all of the garden beds were created by Coyne and DiNezza. They have mostly perennials: grasses, day lilies, monarda, daisies, black-eyed Susans, ferns, elephant ears, lace-cap hydrangea and crocosmia. In the shade, they have several varieties of ligularia. Spring plants include allium, white trillium and snow drops.

Echoing what we’ve heard from other gardeners this year,  the early, warm weather this year has sped up their garden. The lilies, which are usually a show stopper for the garden walk, are already done.

They also have some native plants, including a mullen that planted itself. They have milkweed, too, that they started from seeds provided by a relative who is a professional gardener. The garden attracts many butterflies, hummingbirds and bees. 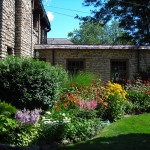 Coyne and DiNezza’s gardens are a very personal project, and they’ve given nicknames to certain plants to remind them of kind people in their lives. There’s Emma’s hosta, named for the friend who gave them the plant, and a tree they refer to as Tom in honor of a friend’s father who helped them plant it.