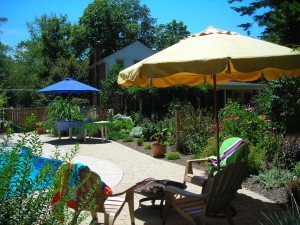 The pool  is the focal point of the landscape in the backyard of Mark and Meghan Vavalle, whose home at 323 Lincoln Ave. was part of the Lockport in Bloom citywide garden tour on July 10 and 11.

Mark estimates that they have 70 varieties of perennials in their garden. They’ve been working on their landscape for four years now. 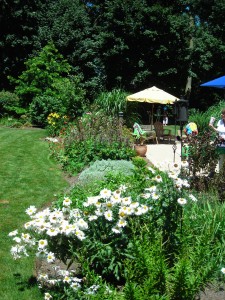 The Vavalles had to cut down a black walnut tree in their backyard, but it remains part of the landscape. First, they used it to make benches. They also sliced rings from it,  which they used for stepping stones in a shady area where little grows. That’s now a favorite play area for young relatives.

In a quirky touch, Meghan hangs old window panes on a fence to add a three-dimensional accent. The sun reflecting off the glass adds an interesting element. 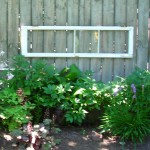 If you’re starting out in gardening, Mark suggests that you buy some books, take your time and plan.

“Just because you like a plant doesn’t mean it grows here,” he said.

While preparing his yard for the garden walk, Mark had a bad accident. He was using a gas-powered hedge trimmer and cut his finger so badly that he needed emergency surgery, and it will take many weeks for it to heal. It could have been worse if he hadn’t been wearing gloves. 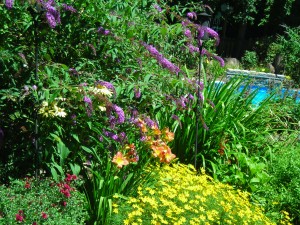 Mark said his mistake was to try to brush away  clippings away with one hand while he held the trimmer– still running– in the other hand. That’s how he got his hand too close to the cutting edge.

His advice: When you want to brush the clipped twigs away, always turn off and set down your power tools.

The story has a happy ending. Despite the mishap, he was working on his garden the day after the surgery.