“Not everything is hardy. The definition of a perennial is something that lives three or more years– if you don’t kill it.” 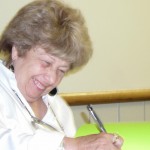 Stephanie Cohen, known as the “perennial diva,” gave tips on summer gardening in the sometimes irreverent and often funny keynote address of the National Garden Festival in Buffalo (now Gardens Buffalo Niagara). The event was held Saturday, June 19 in the Nichols School in Buffalo. After the talk, Cohen signed copies of her books, which include The Perennial Gardener’s Design Primer, Fallscaping, and her newest, The Nonstop Garden.

Here are some of the tips she gave during her talk: 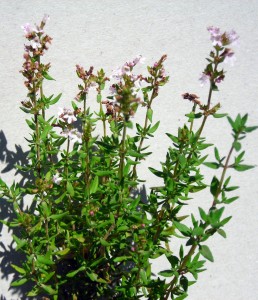 Too often we segregate herbs in their own separate herb garden, but they work well in an ornamental garden, too.  For instance, thyme makes a great ground cover, is beautiful when it flowers, and is fragrant, too.

When it comes to basil, she recommended pesto perpetuo, which is a variegated variety. It”s not hardy, but it makes a great ornamental plant.

“If you decide you don’t like how they look, just eat them!” she added.

New is not necessarily better. Cohen showed a picture of a new variety of hydrangea called Incrediball, which boasts a bowling-ball-sized flower. She hasn’t seen the plant, and questions whether the stems will be sturdy enough to hold a flower that size.

She doesn’t pull any punches when it comes to the many varieties of  heuchera.

“Most of them should be dumped,” she said. If you interested in planting them, “buy only one. If it lives, buy more.”

The best varieties are heuchera villosa, she said.

“Don’t be afraid of it,” she said. “It doesn’t make you sneeze. Its pollen is heavy and falls to the ground.”

Since it’s a showy plant, when people would start sneezing, they’d blame it on goldenrod. Ragweed, which blooms at the same time, has light pollen that flies around and is probably the cause of your sneezing.

A variety of goldenrod that Cohen recommends is Fireworks.

The second plant is commonly known as sneezeweed. The Native Americans used it to make snuff (a fine powder, such as medicine, that is inhaled through the nose, which would often cause the person to sneeze), hence the name. But no one wanted to buy something called sneezeweed. Cohen said she urged that the name be changed, and you’ll now see it listed often as Helenium.

“If people didn’t understand where it got its name, they wouldn’t buy it,” she said.

Shade plants. It can be difficult finding things to plant in shady spots. For grasses, Cohen recommended Hakonechloa, which is all gold or green and gold. For vines, she suggests schizophragma hydrangeoides “Moonlight.”

Deer resistant plants. Allium tastes like onion to deer, and they don’t like onions, she said. There are many varieties of allium, and by planting a mixture, you can have them blooming from April until October.

All-around good buy: lilies. “They’re a good buy for the money,” Cohen said. “If your drainage is okay, they’ll come back. They don’t ask any favors from you; they just grow.”