How this pond was created is a long story that involves a garage built for a Model T Ford, two kids’ fascination with WWI and a couple who know how to rescue great items from the trash.

The story starts in 1995 at the home of Michelle and Jim Schmitt at 253 Crowley Avenue in the Riverside area of Buffalo.They had an old garage that had been built for a Model T. It even held some Model T parts, including an iconic black fender and wooden wheel spokes, Michelle said.

Unfortunately, the garage was too small to hold a modern car, and more to the point, it was falling apart and dangerous. The garage was being held up by cables. To take it down, a contractor unfastened the cables and let it collapse safely. Then the Schmitts had the building materials hauled away.

What was left was a floor of broken blacktop on top of dirt. A low spot at the back of the floor constantly filled with water. Since they were young parents and didn’t have a lot of money, the Schmitts covered up the floor with cardboard and allowed the area to remain like that for a couple years.

In about 1997 the Schmitts installed a new walkway. They had three yards of dirt left over after building the walkway, so they set the dirt where the garage had been.

Their sons, Tyler  and Ryan were young. They were fascinated with World War I and tactical engineering, thanks to Charter School for Applied Technologies, Michelle said. The boys built a “double foxhole firing defense” by digging two holes in the mound of leftover dirt. There was no fence then and all the neighborhood kids would come and play, using pine cones from a neighbor’s tree as grenades.

Then in July 2003 a heavy rain came. Michelle joked that they kind of had a pond.

“Yeah, we kind of have a pond,” Jim responded more seriously.

“My pond was born,” Michelle said.

There was still a lot of work and a convergence of events over the next six years to get the pond to where it is today.

The American Red Cross, housed in the Clement Mansion on Delaware Avenue in Buffalo, had to refurbish their parking lot. The demolition crew was going to throw out huge 5-foot by 3-foot pink Medina sandstone slabs, but they told Michelle with a laugh,  “If you can lift and transport it yourself, it’s yours.”

“I don’t think they ever imagined we could move them,” she said. Michelle, her husband and a big, weightlifting friend named Patrick were able to get them onto the Schmitts’ truck. “The next morning we had three stunning stones with barely a clue of what do do with them.”

The next event that helped the progression of their pond was a natural gas line break outside their house.

A utility company was digging and pierced the line accidentally, forcing the family to evacuate. Michelle said she was horrified, but before she left, she stopped to ask the crew if she could have the broken concrete.

“They gladly dumped it in our backyard,” she said. “Now I had almost enough materials to start building the pond that had existed only in my head.” The concrete was used to hold the dirt in place and provide structure to hold the large stones that edge the pond.

Then a gentleman who lived two streets away was getting rid of his pond liner fabric and the Schmitts took it.

“A friend was the next spark in our journey,” Michelle said. Because the Schmitts own a truck, they were going to a store pick up stone for the friend’s patio.

At the store “I noticed an unmarked broken pallet of tumbled pink rock,” Michelle said. “I asked if it was for sale. The young man came back with a ridiculously low price. I snatched it up. Two truck loads later (plus another trip for the patio stones for my friend) we had base materials.”

Neighbors saw what the Schmitts were doing. One neighbor offered a pump, another hoses. By now it was 2007.

“My pond had come into reality,” she said.

The two side gardens came into being through the generosity of Michelle’s brother-in-law Tom Schmitt. His huge retaining wall had settled and he was dismantling it, so Michelle and Jim were able to get two rows of heavy interlocking blocks.

“It was a welcome addition to our decade-long project,” Michelle said.

Michelle’s friend Carol Fitzpatrick came with the next piece of their puzzle. Her friend had dumpster dived outside the Shea’s Performing Arts Center during renovations and picked up two lovely pieces of plaster molding that were finished to look like marble.

“It was cut improperly and chucked into garbage,” Michelle explained. You can see one piece on the upper waterfall. The other piece is a shield for plugs.

In the lower falls is a large rock from the old Medina Stone Quarry given to the family by a friend who lives next to the quarry.

“A piece fell into my friend’s backyard and she brought it to me,” Michelle said. “We have been blessed with fortune in friends, found items, challenging disbelievers, craftiness and a level of patience that can only belong to gardeners.”

Other elements in the Schmitts’ yard show how they repurpose materials. 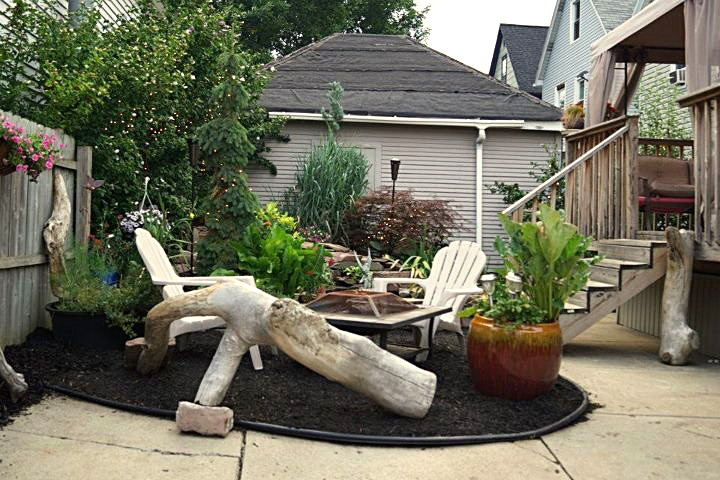 “It’s stunning,” Michelle said. Not only is it beautiful, it is functional. When people visit outside, “nobody wants to sit; they want to lean,” she said. “No one sits on the furniture. They put their foot on a pot or they rest on a wall.” The log provides a place for people to relax and chat.

Michelle offers this piece of advice to other gardeners: “Just keep your eye out and re-imagine something. Everything has another purpose. You just have to figure out what it is.”

She also wants to let people know that it can take a lot of work to do a project like this pond, but they shouldn’t give up after the first year because their pond doesn’t yet look like her pond.

“Somebody didn’t come in and wave their magic wand in a half-hour TV show,” Michelle said.

You can visit the Schmitts’ yard during the Black Rock & Riverside Tour of Gardens from 10 a.m. to 4 p.m Saturday, Aug. 3 and again that evening from 8 to 10 p.m. during the  Starry Night Garden Tour.

If you want to learn more about ponds, check out this class on “Spring Pond Care: The Key to Happy Fish and Clear Water” to be held by Arbordale Nurseries & Landscaping at 7 p.m. Tuesday, April 23 at the Amherst Main Library at Audubon, 350 John James Audubon Parkway, Amherst.

In this 45-minute class, Arbordale staff will discuss all the tasks necessary to have a happy pond this summer. They will cover pumps, filters, fish and plants. A few old wives tales will be bashed along the way. They will take the mystery out of keeping your pond clear. Discussions will include new treatments, aeration’s role in healthy water and more.

Classes are free with preregistration. To preregister, email info@arbordale.com, call Arbordale at 688-9125 or call the Audubon Library at 689-4922.