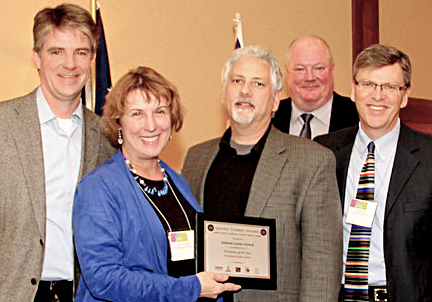 Buffalo’s National Garden Festival was among garden festivals from around the world to receive international recognition last week at the Garden Tourism Conference in Toronto.

Other award recipients traveled from Japan, France, Portugal, Italy and Australia as well as from across North America.

“More and more eyes around the world are being opened to the fact that Buffalo is a premier gardening tourism destination,” said Sally Cunningham, director of the National Garden Festival.

Western New York decided to start the National Garden Festival in 2010, and that was a savvy move. We’re doing it big and we’re doing it right.

And the world is taking notice.

This award is huge honor for everyone involved: the leaders of the National Garden Festival, the volunteers who donate their time and energy to the individual events and the gardeners who open up their gardens to visitors. We should all be proud of what we and our neighbors have accomplished.

While people around the world are recognizing the amazing gardening resources that we have here in Western New York, I think too many of us don’t appreciate what we have here. No place else in the entire United States has a garden walk as large as Garden Walk Buffalo. But that’s not our only garden walk– there are more than a dozen other garden walks to enjoy here as well!

And the National Garden Festival doesn’t include just garden walks. There are bus tours, open gardens, workshops, speakers and the LEAF a Legacy project.

This is great for us local gardeners, but it’s great for our economy, too.

The National Garden Festival brings visitors to our region. Those tourists buy lunch here and stay in local hotels and shop in our stores. That’s revenue for local businesses and jobs for local residents.

It’s time for Western New York gardeners to recognize what an amazing thing we have here– literally in our own backyards.

The world has already noticed.