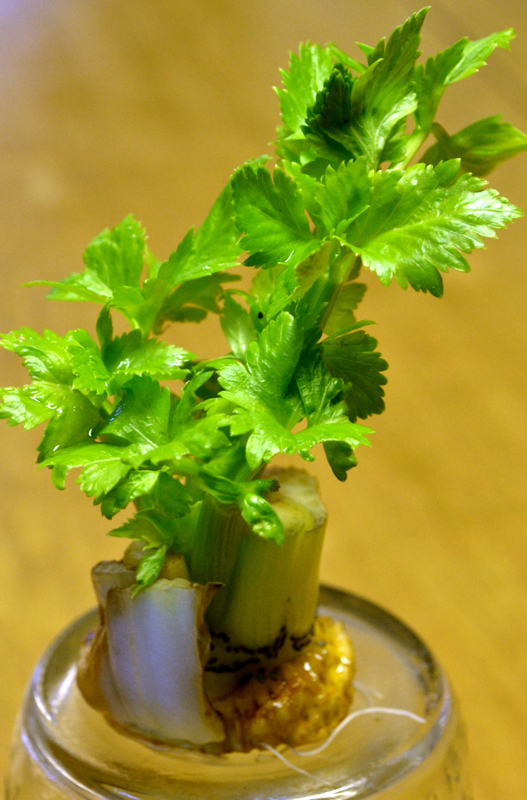 I saw this idea in several places on Pinterest and I just had to try it.

When you’re done with a bunch of celery, you’re left with a stump. I used to toss that stump into the compost pile.

Then on Pinterest I saw that you can use it to start a new celery plant.

It’s really simple. Just set the stump into a small jar or bowl. Add just a little bit of water– about a quarter inch is plenty. You want just enough water to cover that ridge at the base of the celery where the roots come out. (You can see the roots in the photo at the beginning of this story.)

In about 10 days, you’ll see that you have new leaves forming in the center of the stump and short roots popping out the bottom.

When the celery got to that stage, I potted it in dirt to see if it would wilt or continue to grow. I don’t have any windows that are very sunny, but I set the potted celery in the sunniest window I’ve got. It’s been there for several weeks and so far so good! 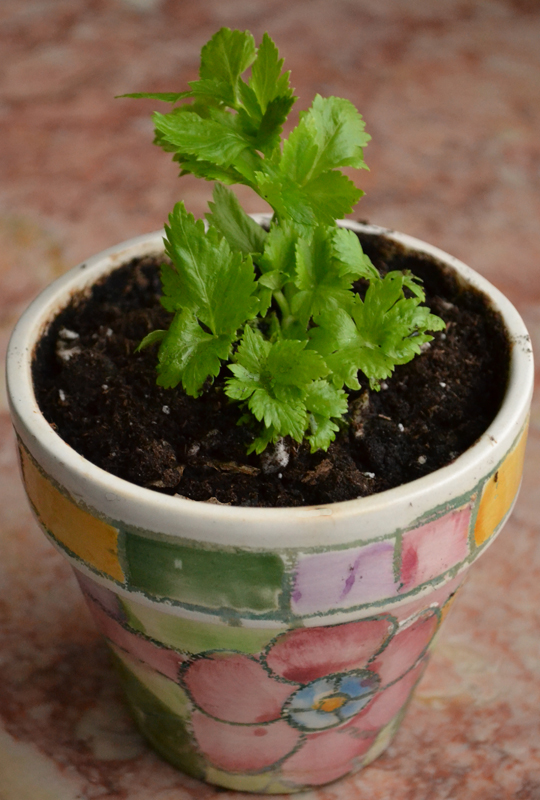 But now what? Can I transplant it outside outside?

Yes, I can move it outside– assuming it does well inside for another three  months.

Celery doesn’t tolerate frost, so you can’t plant it outside until late May, according to Fred Safford, who is in charge of trees and shrubs at Lockwood’s Greenhouses,  4484 Clark St., Hamburg.

The celery that you buy in the grocery store is usually from California or Mexico and is a different variety than what we grow around here, said Jill Kisker, grower at Lockwood’s. Locally grown celery is shorter– about a foot tall– and bushier than celery that you find in the store. The leaves are delicious, but the stems might be bitter, she said.

Safford loves that strong flavor in soups and sauces, but if you want a milder, less bitter flavor, you can blanch the celery in the field, he said. For a few days before you harvest them, cover your plants with a tarp part of the day to shield them from the sun. The color of the celery will be lighter and the flavor will be milder.

Harvest time for celery is usually at the end of summer, perhaps August or September. If you’re starting with a stump, it’s possible than you can harvest earlier, Safford said.

“There’s a lot more energy in that big clump,” he said. “Maybe it will grow faster, but I don’t know.”

I will continue my experiment. I foresee two big challenges.

The first challenge is keeping the celery plant healthy inside the house without grow lights until it’s time to transplant it outside. My plan is to keep rooting new celery stumps. I already have one that has rooted and can be potted, and I’m sure I’ll have a lot more celery stumps to root between now and the end of May. Even if the plants I started in February die before I can get them outside, I should end up with at least one plant that is ready at the proper time.

The second challenge will be to keep the rabbits from eating the celery. Perhaps I’ll use tomato cages strung with yarn.

I’ll keep you posted and let you know how this turns out. If you have tried this or if you have suggestions on optimizing the conditions for celery started from the stump, please leave a comment.

Update on growing celery from the stump posted April 9, 2013

(Scroll down, the information on celery is at the end of that article.)

Celery update: The plants are outside posted May 7, 2013

11 Comments on “Grow celery from the stump!”