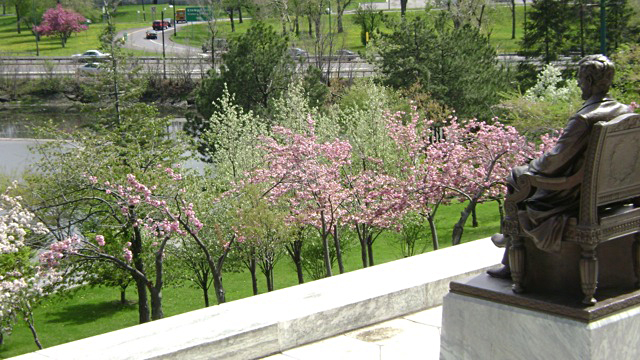 Just as they do in the United States, the cherry trees in Japan bloom first in the southern part of the country and later in the north. Visitors enjoy the spectacular views and accompanying celebrations, and some tourists follow the festivities from south to north during the cherry blossom season.

Wouldn’t it be wonderful for tourists in this country to be able to do the same thing? Washington, D.C. already holds the huge National Cherry Blossom Festival, which includes a parade, art shows, Asian cultural events, concerts, Ikebana demonstrations, food tastings, theater and fireworks in addition to sightseeing. Now all we need is a northern destination for tourists.

This year Buffalo is kicking off its first sakura event or cherry blossom event, said Trudy Stern, marketing director for Friends of the Japanese Garden of Buffalo. Organizers are starting out small and plan to grow the event in coming years.

“We want the event to celebrate the peace and beauty and hospitality of the Japanese Garden,” Stern said.

The Cherry Blossom Viewing Picnic will be held from noon to 3 p.m. Saturday, May 11 in the Japanese Garden in Delaware Park, Buffalo. You can get to the Japanese Garden from the parking lot at the Buffalo and Erie County Historical Society, Elmwood Avenue and Nottingham Terrace, Buffalo. There’s always plenty of parking and parking is free.

Folks are invited to bring a picnic lunch and enjoy a stroll through the Japanese Garden. There will also be a small celebration of the planting of new cherry trees.

The event is timed so that it should fall at or just slightly past the peak of the blooming of the cherry trees in the Japanese Garden.

The Japanese Garden in Buffalo has cherry trees that come from the trees in Washington, D.C., which were a gift in 1912 from the people of Japan. Although the Buffalo trees are still saplings (the oldest tree is only about 10 years old), they already display beautiful pink and white flowers, Stern said. At the beginning of this article, a photo by Atsuki Ntshida-Mitchell shows a wonderful view of the cherry blossoms taken from the Historical Society building.

The Japanese Garden of Buffalo was a gift from the people of Kanazawa, our sister city in Japan. Kanazawa is home to Kenrokuen Garden, which began as part of an imperial palace and is one of the most famous Japanese gardens on the planet, Stern said.

The garden not only celebrates the the friendship between Buffalo and Kanazawa, it is a symbol of peace, Stern said. It is one of the War of 1812 Bicentennial Peace Gardens, which celebrate the 200 years of peace and longstanding friendship between Canada and the United States, the countries that share the world’s longest undefended border.

A restoration of the Japanese Garden began in 2009 as one of the projects undertaken with a $1.2 million grant from the Buffalo and Erie County Standing Committee of the Niagara River Greenway Commission, said Thomas Herrera-Mishler, president and CEO of the Buffalo Olmsted Parks Conservancy.

Kristin Montoya, the head gardener for the Japanese Garden at the Chicago Botanical Gardens and an expert in Japanese garden design, oversaw the project. Plants that were inappropriate for a Japanese garden were pulled out and new plantings put in.

While that project has been completed, the Japanese Garden in Buffalo continues to grow and evolve.

The Buffalo Olmsted Parks Conservancy is working to build an endowment to ensure perpetual maintenance of the garden, Herrera-Mishler said. People can make a donation to the parks conservancy and, if they like, designate their gift to go specifically to the Japanese Garden. There is also a naming opportunity available.

Friends of the Japanese Garden of Buffalo is recruiting volunteers. They need people to help with plantings and clean-ups in the garden, to help with their website, to do fundraising and publicity and to support special events. For more information, contact Stern at tstern2@aol.com or 716-445-4446. You can also find them on Facebook.