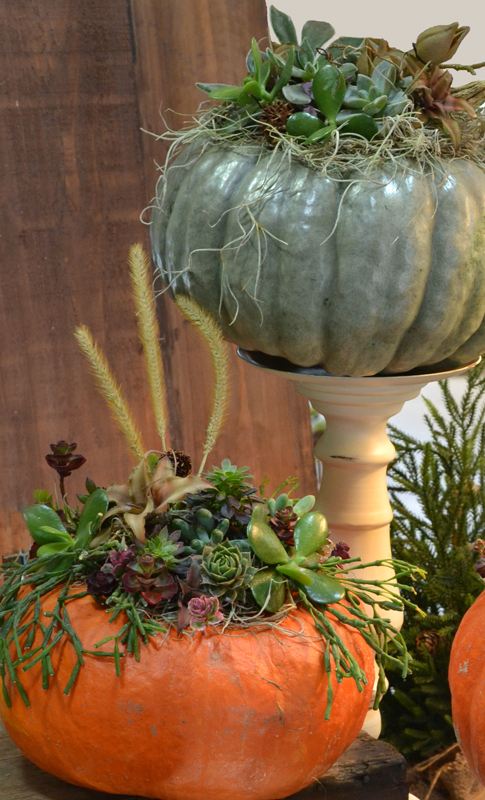 If you have a whole pumpkin left over from Halloween, here’s an easy way to fancy it up for Thanksgiving.

This idea comes to us from Becky Watts, CNLP, garden consultant at Lockwood’s Greenhouses.

Take a whole pumpkin. (Note that the green pumpkin in the photo is a real, fresh pumpkin. It’s a variety called Ghirardelli.)

Glue Spanish moss to the top of the pumpkin using Aleen’s Craft Glue. Watts said she spreads a band of glue about two inches wide around the spot where the stem was attached to the pumpkin. Let the glue set for two or three minutes until it gets tacky.

Set the moss on top of the glue. Let that set for a few minutes. If you have extra strands of Spanish moss hanging down, snip them off.

Cut off small pieces from your succulent plant. Watts likes to do this a few days ahead of time to allow them time to scab over. Just set them some place out of the way while you wait. She has also used the succulents freshly cut, so you don’t have to wait if you don’t want to.

Place the sprigs of the succulents in the Spanish moss. To help them stay in place, Watts puts a drop of glue on the side of the stem that will touch the pumpkin. She places the plants in a circle.

Plants that work well for this project include hens and chicks, echeveria, aeonium, aloe and jade plants. Small ground covers are great for filling in little nooks and crannies.

You can also add dried grasses, black walnuts, small seed pods and anything else you have around, she said.

To maintain your arrangement, just mist it every week or two, she said. In two or three weeks, the plants will root into the moss.

The pumpkin should hold up for five to six weeks in the house. (If you are going to set the pumpkin on a finished wood surface, I suggest setting it on a plate. If your house is warm, the pumpkin could start to get soft before you realize it and it could mar the wood. I learned this the hard way!)

When your pumpkin begins to go downhill, gently pull out the plants and toss the pumpkin on your compost pile.

You can buy succulents, Spanish moss and even home-grown pumpkins at Lockwood’s.

If you don’t want to make this centerpiece yourself, you can buy one already made at Lockwood’s.

Coming up: Lockwood’s will hold its Christmas open house from 9 a.m. to 4 p.m. Saturday, November 17, at the garden center at 4484 Clark Street, Hamburg. Check out their classes, too, which focus on decorating for the holidays. Many are hands-on workshops and you can take home the wonderful creation you have made.