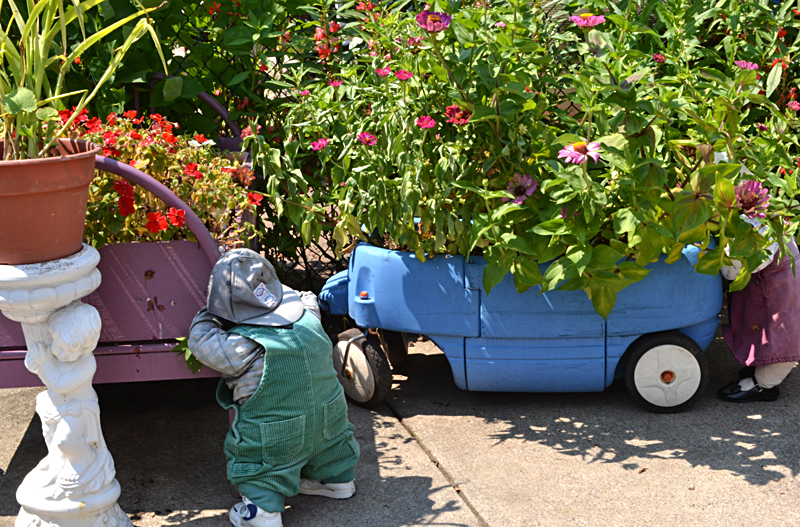 “You can put anything in containers and you can put containers anywhere,” said Walter Kozlowski, who grows even apple and peach trees in pots– and harvests fruit!

Kozlowski shared his unusual container plantings, vegetable gardens and flower beds during the Black Rock & Riverside Tour of Gardens on August 4. The event also featured a Starry Night Garden Tour in the evening.

Kozlowski grows colonnade apple trees, a type that grows straight up and stays short. You can see them in the photo at left. He harvests the apples, but didn’t get as many this year because of the damaging thaw and freeze cycle we had in spring. 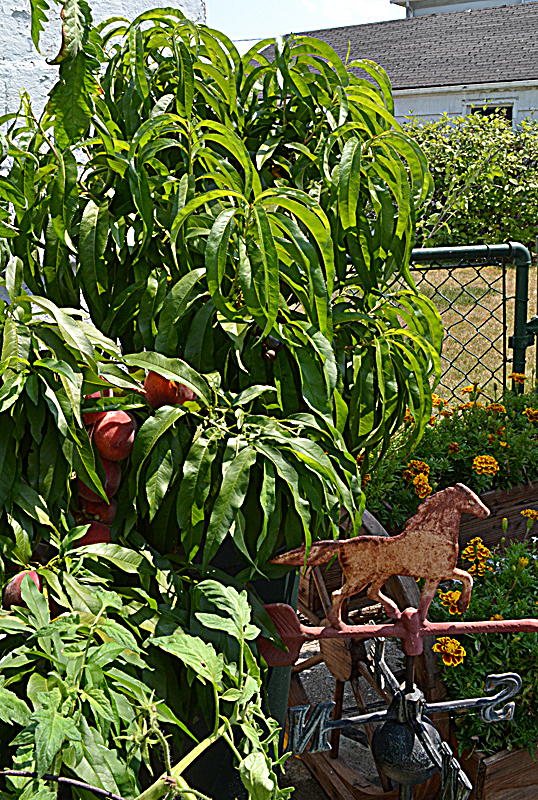 In the photo at right you can see peaches peeking through the leaves on a tree that is less than three feet tall.

While Kozlowski has roomy front and backyards, using containers allows him to line his driveway and side porch area with flowers and other plants.

Even if you have just a small area in which to garden, such as an apartment balcony, you can use this idea to grow flowers, tomatoes and even apples and peaches. 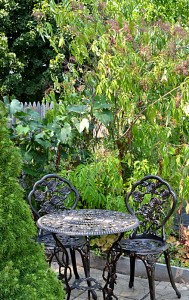 However, potted trees are more susceptible to freezing than are trees that are planted in the ground. During the winter, Kozlowski places the potted apple and peach trees in his unheated garage to protect them. If you want to grow perennials in pots, you should consider whether you have a spot that’s protected enough for them during the winter.

He uses both practical and whimsical containers for his plants. The peach tree is grown in an ordinary plastic garbage can. Tomatoes are planted in old enameled soup pots. At the beginning of this story, you can see the blue wagon that someone threw out that now holds flowers, and next to it is an old bed that Kozlowski converted into another flower container. 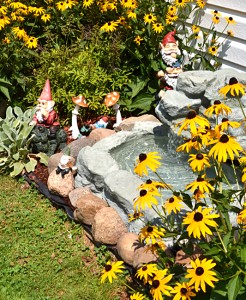 Even more fruits and vegetables are planted in beds in his backyard: grapes, broccoli, cucumbers, squash and pumpkins, as well as green, yellow, red and purple sweet peppers. The peppers are doing well, but some of the other plants seem to be suffering from the heat, he said. 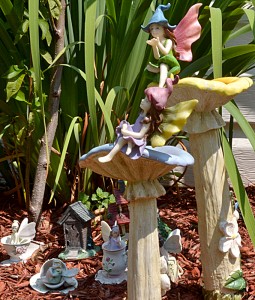 A small tiled patio is part of the wide border garden in the backyard, which you can see above left. Behind the table and chairs and to the right, berries are ripening on the tall elderberry bush.

“They’re good if you can get them before birds do,” Kozlowski said. He has used the berries for wine, pie and jam.

Kozlowski’s backyard also includes a fountain surrounded by gnomes, above right, as well as a fairy garden for the grandchildren, above left. 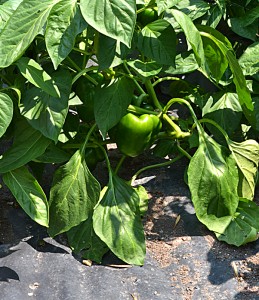 Kozlowski placed an old tire in one of his beds because it was supposed to help retain heat for the plant, but he said that didn’t really work and now he can’t get the tire out of the garden. 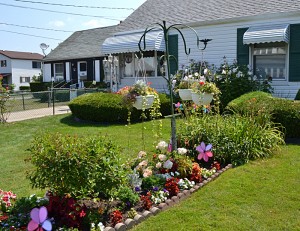 However, what does work, he said, is black plastic, which you can see above right. He lays the black plastic down to keep the soil warm and to keep the weeds down. He uses a thick gauge plastic, 6 mils, because lighter plastic gets ripped apart in the wind.

You need to make holes in the plastic so that you can insert your plants. His son, Wally Kozlowski Jr., was using a steel rod to make one hole at a time, but found it was much quicker to use a pitchfork and make several holes at a time.

The front yard, above left, is also lovely, with a lush flower bed with hanging baskets. A lovely hibiscus blooms near the windows.