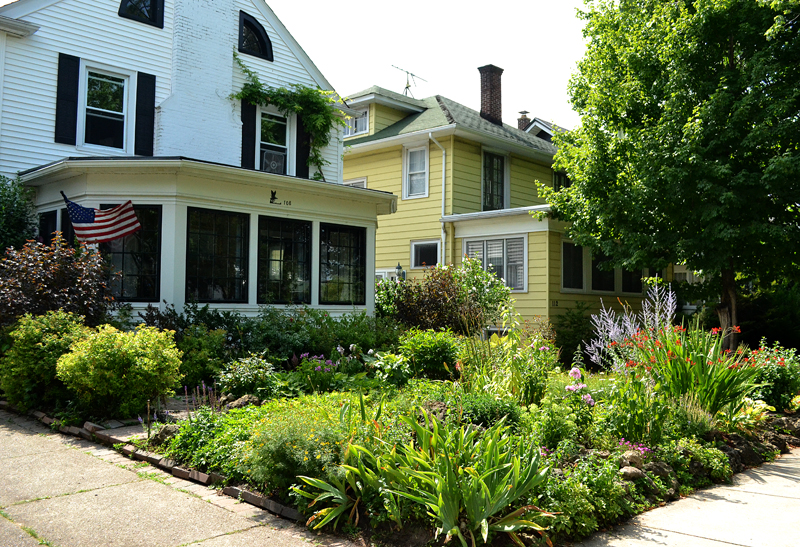 Greg and JoAnne Hudecki of 108 University Ave., Buffalo, have a grassless front yard that started with a burst pipe. After the repair work was done in their yard, they could never get grass to grow.

The Hudeckis shared their gardens during the Samuel P. Capen Garden Walk on July 14. The walk showcases the neighborhoods surrounding the University at Buffalo South Campus and is named for the first full-time, salaried chancellor of the University of Buffalo.

The Hudeckis moved into their home 38 years ago when Greg, a dentist, had just gotten out of the Army.

“This is our first and only house,” said JoAnne, who recently retired as executive director of Kids Escaping Drugs. “It’s a great neighborhood with great neighbors. We’re pretty lucky.”

When they moved in, great elms graced the street. A month later, big red dots were affixed to the trees– The trees were diseased and had to be taken down.

Greg loves trees, so rather than wait for the city to act, the Hudeckis and other neighbors planted some of the new trees, which now tower over the houses.

While the Hudeckis were the first on their street to replace their lawn with garden beds, other neighbors have followed suit.

“They think it’s easier than mowing– until they have to weed every day,” JoAnne said. “But it’s relaxing for us. We just sit there and weed and talk.”

While JoAnne will spend an hour or two in the garden about three times a week, Greg is the real gardener. He waters the garden twice a day and is working in it every night.

“He’s always planting and transplanting,” JoAnne said. “I don’t know if he talks to it, but he nurtures his garden.”

As spectacular as the front yard is, the backyard is a real treat. The Hudeckis were inspired by a 2008 trip to Italy, and the enclosed yard has a European feel to it. Greg made the table himself and trained the vines along the fence.

The Hudeckis planned their gardens so they would have color throughout the year, but our early spring this year threw plants off schedule.

“This year all the color came at once,” JoAnne said, in a lament I expect to keep hearing from gardeners this summer. “Everything bloomed early. Last week, every flower was in bloom.”

There were still some perennials in bloom, including a rose of Sharon. Of course, that doesn’t usually bloom until August.

Don’t miss these other stories of garden walks from this past weekend:

Too shady for grass, Hamburg yard is filled with gardens, paths & curios

South Buffalo gardener fills many gardens with plants that spread

Garden walks coming up next weekend:

Get a map of the gardens here.

This self-guided tour will take place in the Village of Kenmore and the Town of Tonawanda. The night tour, called Saturday Night Lights, will be held 8:30 to 10:30 pm. Saturday, July 21.  Look for a guide to the gardens here.

The 9th annual Lancaster Garden Walk is a free self-guided tour of gardens. Programs are available at Two Chicks and a Rooster, 720 Aurora Street in the Town of Lancaster, and at Petals to Please,  corner of Central Avenue and Pleasant Avenue in the Village of Lancaster. For more information visit lancastervillage.org or visit them on Facebook. See the list of gardens on the 2012 Lancaster Garden Walk and a map of the walk.

The West Seneca Garden Walk will take place for the first time this year. Pick up maps at Ebenezer Greenhouse, 1347 Union Rd., West Seneca. Get maps right here. Maps will also be available on the Burchfield Nature & Art Center website.