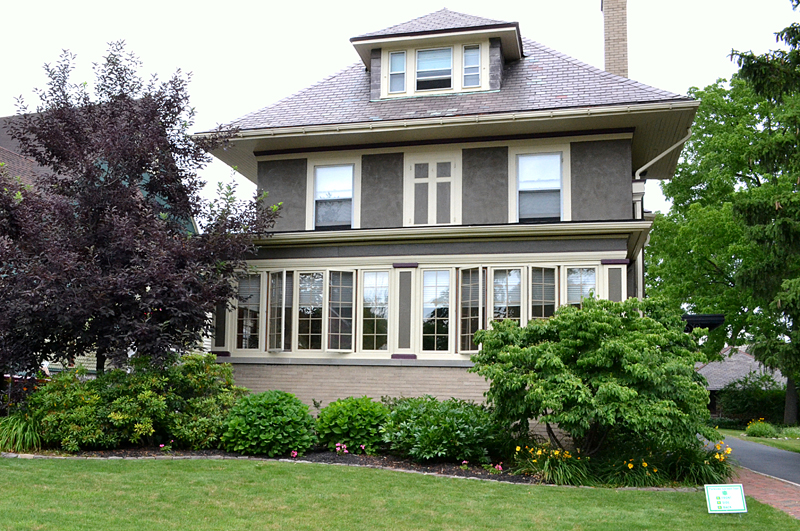 The weather was seasonably warm on Sunday, and that made the cool, blue pool below look even more appealing. Michael and Claudette Rivera of 268 Crescent, Buffalo, shared their lovely landscape during the 15th annual Parkside Garden Tour on June 24.

Their home was built in 1913 by the Kelly family that established Hens and Kelly, a local upscale chain of department stores that operated from 1892 to 1982.

Mike likes to use plants that go with the time period in which the house was built, such as rose of Sharon, snowball bush and rhododendron. 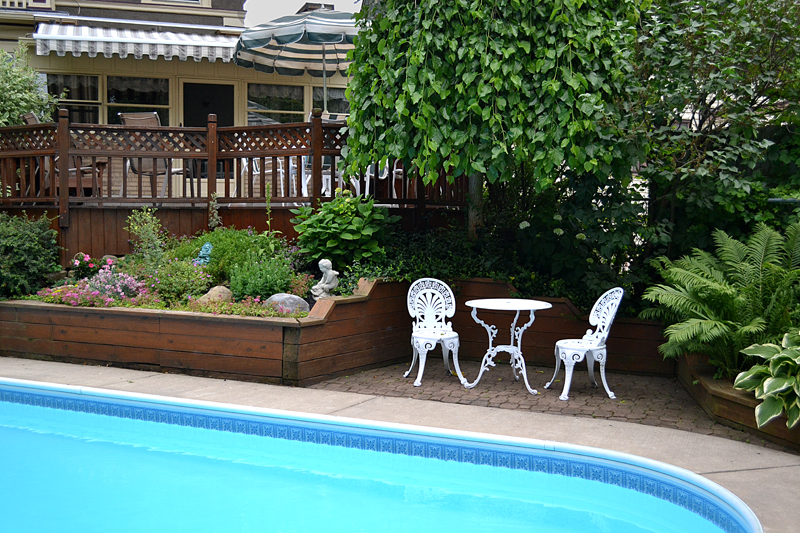 When the Riveras  moved in 39 years ago, the backyard had a grassy hill that their children enjoyed playing on. In summer, they used a Slip ‘n Slide, and in winter they sledded.

About 19 years ago, they decided to build the deck so Mike wouldn’t have as much grass to mow. The deck is built on the hill. The Riveras, with help from a neighbor, installed the deck themselves, and they decided to cut away part of the hill to form the seating area.

They had the pool installed at the same time. It was placed at a diagonal to fit in the yard better, which also adds design interest. 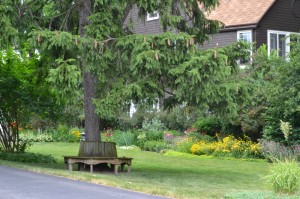 Container plantings surround the pool. At first, the Riveras had daylilies in the container to the right of the table and chair, but that didn’t work for a couple reasons. First, the area was a bit shady for the plants. Second, each flower on a daylily lasts just a single day and falls off, creating a great deal of litter around the pool. Hostas, ferns and other shade plants are now located there.

The yard is fenced in and hanging baskets of annuals add color to the fence. 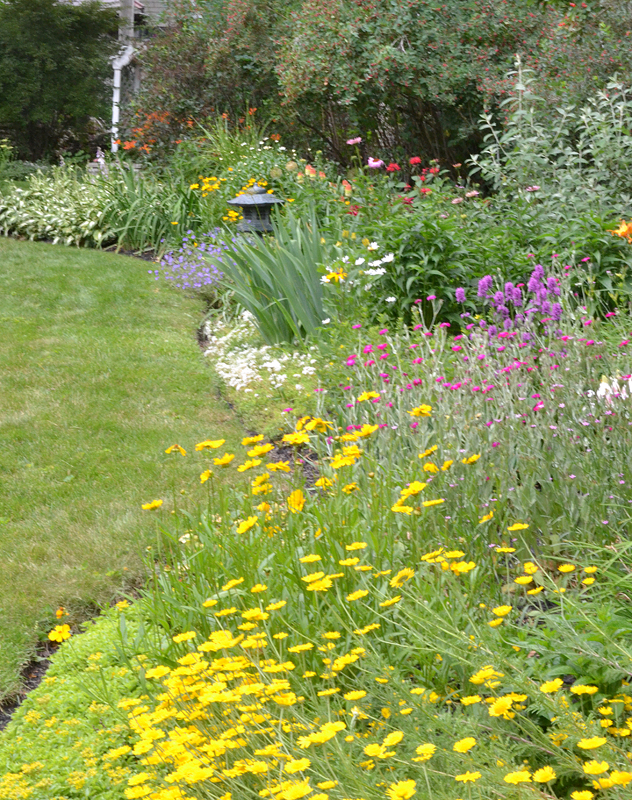 Another point of interest in the side yard is the arbor with an 80-year-old wisteria, which you can see in the photo below left.  It was pruned back heavily after blooming this spring.

Claudette noted that Wisteria Lane is where the TV show Desperate Housewives takes place, and there the wisteria is always in bloom. In real life the wisteria blooms for just two weeks.

The pathway under the arbor leads to an herb garden.

A big challenge the Riveras faced was the black walnut trees in the yard because they are toxic to many other plants. 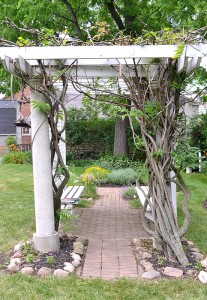 They tried growing vegetables. The plants  would start out well, then shrivel up and die. Even many flowers are susceptible.

“We lost so many flowers because we didn’t know black walnuts were so toxic,” Mike said.

The plants include, clockwise from left, coreopsis (yellow), alium (what looks like a ball on a stick),  red hot poker (two-toned), bee balm or monarda (red), oriental lilies (purplish red) and blue geraniums. Other bulbs such as daylilies and iris do well, too.

Still, Claudette will try plants that aren’t on the list and just enjoy them while they last. They include the passion flower just to the right of the Asian ornament. Many of its blossoms have turned brown and she had to cut them off. 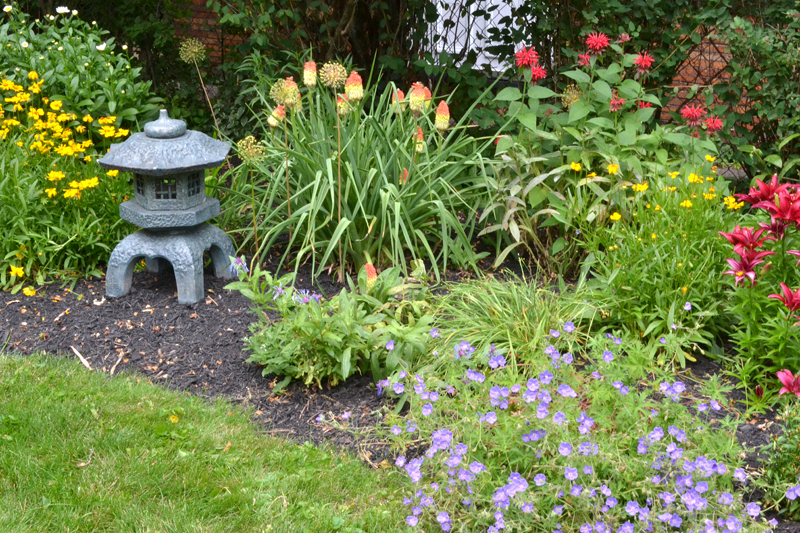 Mike also has a vegetable garden hidden away on the other side of the house, far from the black walnut trees.

Going behind the garage, which used to be a horse stable, you’ll see a quirky container garden. Shade perennials fill what was once a trough that held drinking water for the horses. You can see it in the photo below left.

The Riveras  got inspiration and ideas from the gardens on Garden Walk Buffalo.

“You start developing an eye for what you like,” Mike said.

Claudette said that when she was starting out, “I didn’t know much, so I was always moving plants around. It might be less work if you have a plan.” 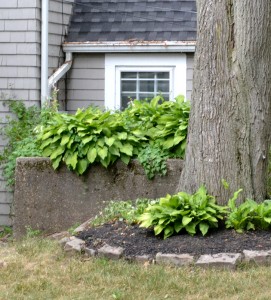 People say that growing perennials is easy, but Claudette  cautions that there is still plenty of work involved. Even though you don’t have to replant them every year as you do annuals, you still have to divide perennials in order to control their spread and keep them where you want them to be. The more perennial beds you have, the more work there is.

“You have to love gardening if you want a big space,” she said. “It’s addicting if you do enjoy it.”

Coming up this weekend: Village of Williamsville Garden Walk from 10 a.m. to 4p.m. Saturday, June 30. See more information our Upcoming Events Page or at the National Garden Festival website.

All photos by Connie Oswald Stofko.