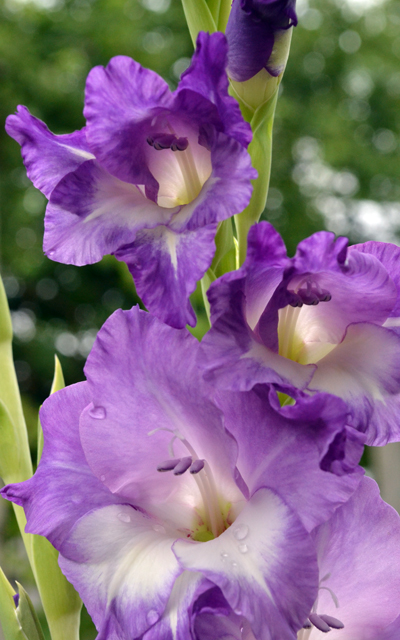 The gladiolus, which is blooming in many Buffalo-area gardens now,  is the birthday flower for August.

I’m told you’re supposed to plant gladiolus bulbs in spring. That explains why they didn’t come up the first time I planted them– I planted them in the fall.

After that fiasco, I again planted gladioluses (the plural is gladioluses, gladioli  or sometimes gladiolas). The only reason I tried them again was because I got bulbs as a gift.  (Technically, gladioluses have corms, not bulbs, but I don’t think that distinction is important in this context. )

Anyway, the plants did better the second time, and I was able to enjoy some gorgeous flowers. I thought they grew better because I had chosen a new spot for them. Now I know it probably had more to do with planting them at the right time of year.

Some people view gladioluses as annuals, but the ones that are blooming in my garden now (you can see them here) came back from last year. I mulched them, and we had a good snow cover last winter, so that probably helped.

To help ensure their survival, you can dig up your gladioluses in the fall and replant them in spring. (Keep them in a cool basement. Don’t leave them in an unheated garage or they’ll freeze– that’s a tip I learned the hard way with some other bulbs.)

Personally, I’ve found that I’m too lazy to bother with anything you have to dig up every year. My gladioluses will have to trust their luck under a bed of leaves.

Another reason my glads did better this summer was that I was vigilant with my rabbit deterrents. As soon as I noticed the plants coming up, I alternated among soap, dried blood, a commercial spray and a spray I made myself from last year’s bumper crop of cayenne pepper. The combination worked.

Gladioluses look great in the garden, and they’re wonderful as cut flowers, too.

If you have only one or two to display in a vase, you may be hard pressed to find a vase that is both tall enough and skinny enough. Here are a few ways to deal with that problem: