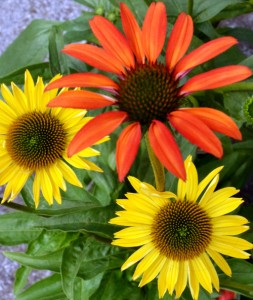 Many gardeners feel they must get their garden planted by Memorial Day weekend or they’ve missed some sort of deadline. They think that if they go to a garden center now, they’ll see nothing but shriveled-up specimens on a discount table.

Surprise! It’s still planting season in Buffalo and Western New York, and garden centers are full of fresh, new perennials and trees that you can plant right now.  Plus, you get instant color and instant flowers because these fully grown plants are beginning to bloom now.

“They love the sun, and they’ll bloom right to fall,” Malachowski said.

You may be familiar with one type of echinacea called purple coneflower, right, which attracts butterflies. This butterfly posed for quite a long time!

Note that even though it’s called “purple” coneflower, the flower is really what I would call pink. 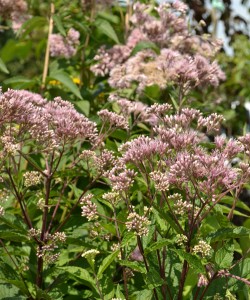 But echinacea comes in many varieties and colors. The photo at the beginning of this story shows yellow ‘Daydream’ echinacea and a tangy red that is aptly named ‘Tomato Soup’.

Malachowski showed me another plant that also attracts butterflies. It’s eupatorium, a native plant also known as Joe Pye Weed, which you can see at left. Petals and Pines also has a hybridized eupatorium with a chocolate brown leaf.

Trees as well as perennials can bring you flowers and color at this time of the year. 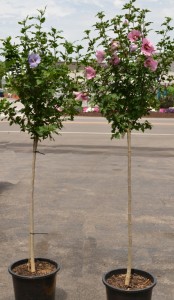 “Now is a good time to get trees,” Malachowski said.

She suggests planting them in the cool of the evening rather than during the heat of the day.

“With the shock of the sun, the tree will want to wilt,” she explained.

The most important thing is to keep them well watered, especially during the hot spell we’ve been having, Malachowski said. Keep them evenly watered for two to three weeks so the roots establish well. 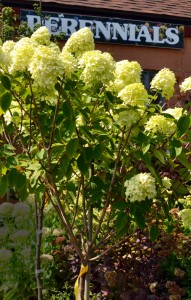 While you can plant trees into autumn, you want to get them well established before there’s a cold snap, she said.

At right are two rose of Sharon trees, a light purple called ‘Blue Satin’ and a pink called ‘Rose Satin’, which bloom through late summer and into fall.

At left is a ‘Limelight’ hydrangea tree. It gets three to four feet tall, and the plant you buy is already that height.

Also available at this time of year are ornamental grasses.

“Sometimes you just need a specimen to attract attention and send the eye over to that part of the garden,” Malachowski said. The many varieties of ornamental grasses can fill that need.

While there are many grasses that like full sun, there are also some for shadier spots. At right is a variegated Japanese forest grass called Fubuki ‘Briform’ that tolerates shade.

Here are four more colorful, flowering perennials that you can plant now. 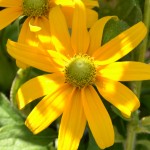 Rudbeckia. You probably recognize black-eyed Susans, but there are many varieties of rudbeckia. At left is ‘Irish Eyes Daisy’, which features a green center.

Daylilies. There are many varieties of these perennials, which bloom from July to mid-August. 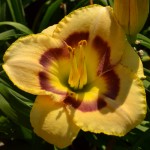 At right is ‘Custard Candy’ daylily. 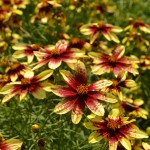 Lavender. Lavender is treasured for its scent. It’s good for a dry spot in your garden. 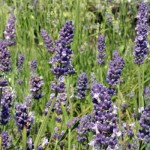 Malachowski suggests getting it in and allowing it to establish itself before the weather turns cold.