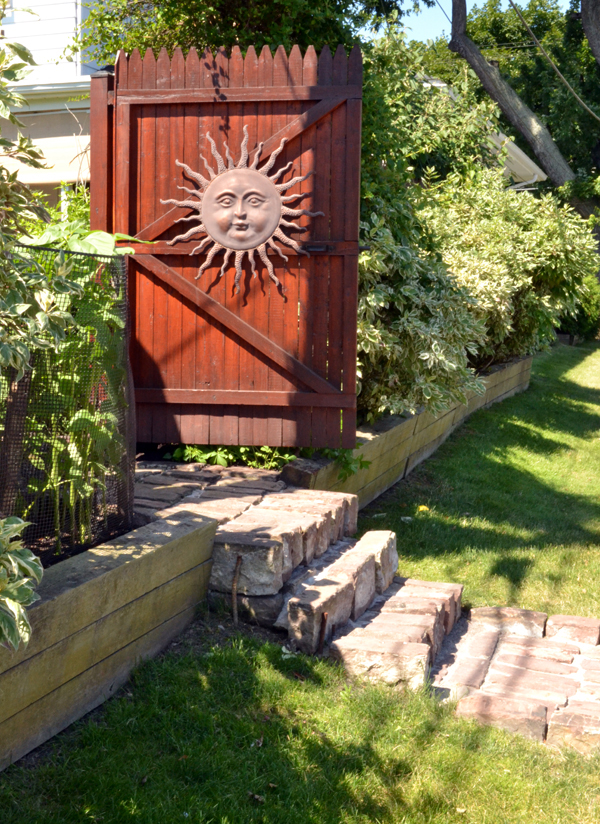 When Jim Tarantino moved 22 years ago into his home at 1069 Eggert Rd., Amherst, there wasn’t much of a garden.

His major concern was erosion in the part of the backyard that slopes down to what is now Kadimah School of Buffalo. He built the retaining wall and planted whatever he could to hold down the soil, happily accepting cuttings from other gardeners.

In the photo at left, these lovely plantings are actually outside his fence; his yard is to the left.

Tarantino exhibited his garden during the 10th annual Samuel P. Capen Garden Walk on Saturday, July 16. The walk is held in the University Heights area of Buffalo and the Eggerstville neighborhood of Amherst.

While he still trades perennials with others, now that his gardens are established, Tarantino can be more choosy about what he plants. At right is orange clockvine or Thunbergia gregorii that he loves. It comes from California and is an annual here. Hummingbirds like it, and it blooms from now until fall. 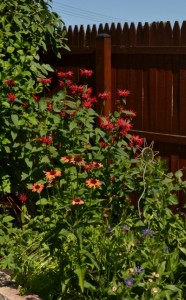 Inside the fence, a wide variety of flowers fill beds throughout the yard. At left, you can see red monarda and peach-colored ‘Sundown’ echinacea.

A bartender, Tarantino works in the gardens in the afternoon.

The beds look great because he maintains them regularly.

There are several spots to relax in the yard. At right, a hammock in the sun enjoys a backdrop of clematis as well as several varieties of sunflowers, which are not yet in bloom.

Tarantino said his favorite flower is probably the sunflower, and he has 15 varieties. 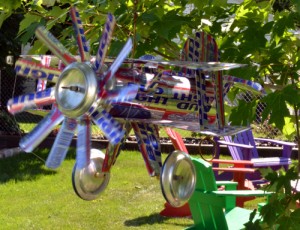 “They just need sun and water,” he said.

His sunflowers come in oranges, coppers, reds, yellows and whites. I was glad to learn the name of one variety I have in my own garden. It is a perennial called prairie sunflower.

Another seating area is made up of brightly painted Adirondack chairs, which you can see in the photo at left. In the foreground is an airplane made of beer cans, whose propellers spin in the breeze. Tarantino bought it on e-Bay. 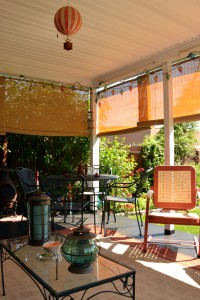 The patio provides a nice shady retreat on these hot sunny days.

Tarantino said he loves old things, and the orangish chair at right is part of a set that includes a glider. The set was  made by a company called JR Bunting Glider Company of Philadelphia, which went out of business in 1946. Tarantino sandblasted the vintage furniture and it looks brand new.

For folks who want to have a lush, full garden like Tarantino’s, he offers this advice: