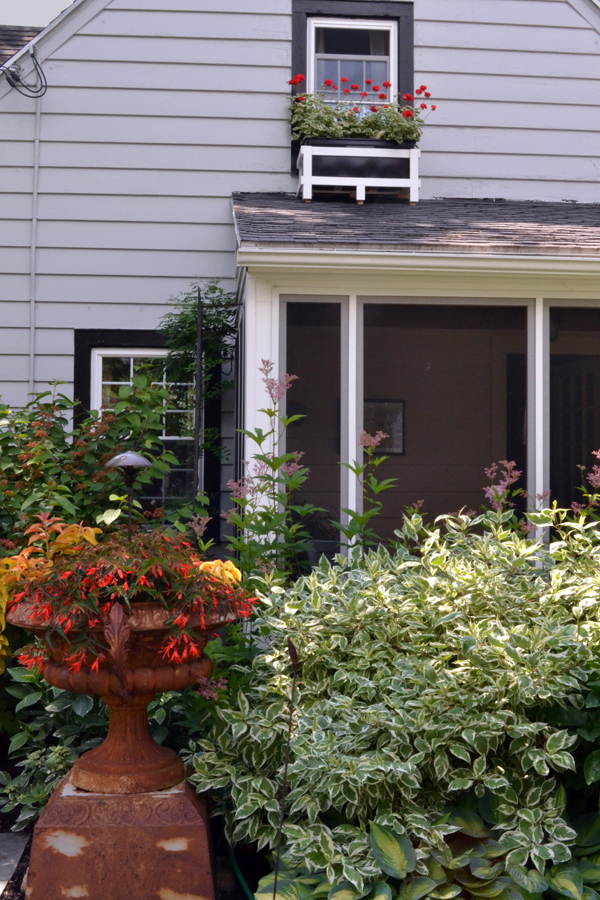 Jeff Leyonmark of Hamburg believes every gardener is an artist. In addition to gardening, they all seem to have other creative interests as well. They build or paint or cook.

This artistic part of life is something that is important for Jeff to share with his children.

“I want to bring art everywhere,” he said.

He and his wife Wendy shared their garden with visitors on Saturday and Sunday, July 9 and 10, during Buzz Around Hamburg, the town’s seventh annual garden walk. The event also included a garden fair with vendors.

An example of Jeff’s artistic sense is the flower box he built, which you can see in the photo at left.  It was inspired by Carl Larsson, art laureate of Sweden. At a time when many artists were recluses and had lives that ended in tragedy, Larsson felt that art and family should be intertwined, and he made his family a source for his work. 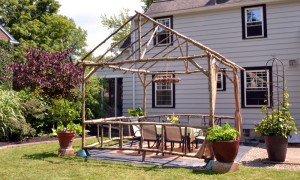 Jeff is also drawn to Larsson because of his own Swedish heritage.  The Leyonmarks will decorate their home with the theme of “A Swedish Christmas” when they participate in the Hamburg Tour of Homes held by the Hamburg United Methodist Church in December.

Another of Jeff’s projects is the gazebo in the backyard, pictured above right. He cut the logs on Father’s Day and he and his father built the structure the next Saturday.

“It’s not meant to be complex,” Jeff said. “It’s whimsical.” 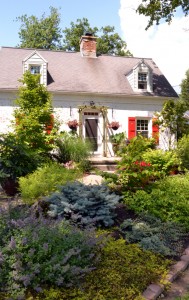 Jeff works in his family’s insurance business, but he once worked as the garden center manager at Lockwood’s Greenhouses, so he’s knowledgeable about plants. He says he’s not a designer, though, and doesn’t plan out his gardens.

When he was installing a garden along the side of his house, Jeff just tried to get a mix of textures and colors. He had a variegated plant, so he decided he should have chartreuse or purple next to that. When he came to a hole, he put in a sand cherry because it had the right colors.

The way he mixes plants can also be seen in the photo of the front of his house at left.

“To me, gardening is trial and error,” he said. “Do I make tons of mistakes? Absolutely. Do I move 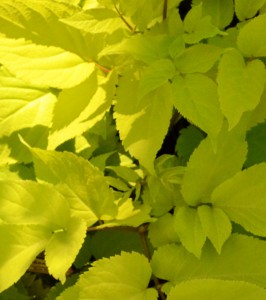 three-quarters of my plants? Absolutely.”

“Other people are better gardeners,” he said. “I’m more of a plant collector.”

One of his recent finds is a ‘Sun King’ aralia, which you can see in the photo at right. It’s a shade plant in an unusual chartreuse color.

Jeff also grows vegetables in the large raised bed in the photo below left. The fence and gate adds architectural detail and keeps out neighborhood cats.

You won’t see flowers mixed in because Jeff views his vegetable garden like a farm: it must always be yielding.

“We don’t buy lettuce for seven months,” he said.

He top dresses with compost and plants right through it, using more than 30 bags of compost per year in his yard. He doesn’t recommend using compost that you get from a municipality because the yard waste they collect might have herbicides or other chemicals on it; you don’t know what you’re getting, Jeff said. He prefers to use organic-based fertilizers.

“Vegetable gardening is just about building biodiversity,” he said.

If you missed seeing the Leyonmarks’ garden during Buzz Around Hamburg, you can still stop by. It’s one of the many open gardens that are part of the National Garden Festival in Buffalo. They’re open at different times, so check the schedule carefully. The Leyonmarks’ garden, 88 Woodview Ave., Hamburg, is open from 6 to 9 p.m. Thursdays, July 14, 21, and 28.

2 Comments on “Every gardener is an artist, says Hamburg man”