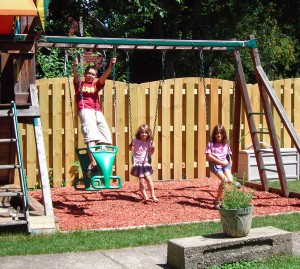 There’s plenty of room for the Thomson children to play in this huge backyard in the City of Buffalo. From left are Hunter, 11; Mackenzie, 5, and Evelyn, 8.

The Thomsons shared their yard during Garden Walk Buffalo on July 24 and 25, and visitors were amazed that such a large expanse was located at 55 Hodge, not far from Children’s Hospital.

The L-shaped yard extends approximately 180 feet away from the back deck, then actually turns and encompasses a small chunk of the lot next door. The yard is large, even by suburban standards. 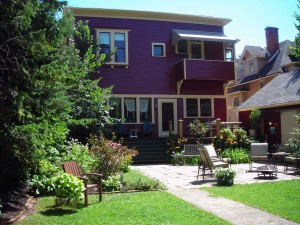 Parents Alex and Michelle have created spaces for kids in the yard, and balanced them with spaces for adults.

An area for grownups is the flagstone patio that the Thomsons put in, which can be seen in the photo at right.

As you walk away from the house and through the backyard, you reach the swing set and a large grassy area, which gives the kids room to play soccer, throw a Frisbee or stretch out the Slip ’N Slide. The view below is taken from about three-quarters of the way back in the yard, looking toward the house.The sidewalk that bisects that area was there when they bought the house, Alex noted, so they kept it. 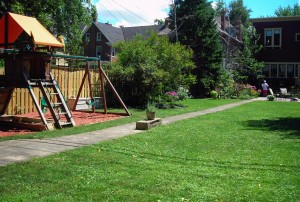 If adults want to be nearby while the Thomson children are playing with the many kids from their block, they can sit at a table and chairs located just a bit farther back in the yard.

As you walk even farther back, you come to a  short fence that separates the main part of the yard from the vegetable garden. (There’s also a giant black walnut tree, which kills tomatoes, Alex said, so the family grows corn, pumpkins and sunflowers instead.) 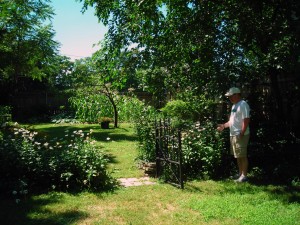 When you make a right turn, you come to a wrought iron gate that separates the straight part of the yard from the chunk behind the neighbor’s property. In the photo at right,  Craig Jones of Allentown stands in the extra piece of land and admires the view during Garden Walk Buffalo. From our perspective, we can see the ample vegetable garden beyond the gate.

Having such a large yard allows you to do a lot, but it poses its own challenges. How do you fill up so much space?

When the Thomsons bought their home, the yard was badly overgrown. They’ve been working on it from the house back. Flower gardens are located close to the house, but they haven’t done much with the extra chunk yet. 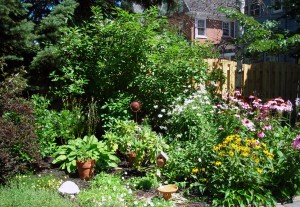 The yard has many well established trees and shrubs. A mock orange spills over into a neighbor’s yard, and a lilac bush can be smelled from the house, Alex said.

The house was built in 1885, and the property was one of the last to be developed in the neighborhood, he said. There’s an apple tree on the property that the previous owner says was from the farm of Mr. Hodge, the street’s namesake.

Despite the large size of the yard, the Thomsons plan to continue developing their landscape.

2 Comments on “Surprisingly large backyard is hidden in Buffalo”